11 Traits All Aliens Would Probably Have, According to Science

What traits, according to scientists, would alien visitors from outer space have?

In recent decades, as mankind endlessly talks about alien life, it seems that the time and duration of this contact is one of the most important issues occupying our minds.

Books, movies and music dedicated to aliens demonstrate that the interest in the subject does not disappear, and over the years, the ideas about alien appearance, abilities and technology become more and more abundant. Some of these ideas are absolutely fictional, while some others are based on scientifically sound assumptions suggested by their authors.

The main distinctive trait of Homo sapiens separating them from other species has always been their aggressive behavior directed towards the species at lower levels of the evolutionary ladder.

Adaptation during evolution and struggle for survival allowed us to become the most successful creature in nature. If we ever make a contact with extraterrestrial visitors, it is possible that aliens will think of themselves as the dominant race and treat us only as a resource, that is – the same way we treat, for instance, draught-work animals.

According to the article recently published by the University of Missouri, aliens will likely belong to a much-advanced level of development and, in order to explore abilities and the level of development of the human race, they will initially need to adopt an aggressive or offensive strategy, which would not necessarily have to be in the form of armed invasion.

Any alien life form that has reached Earth, by definition, must have some kind of drive or curiosity to explore. Most likely, the curiosity of intelligent beings from other planets toward Earth will be similar to the interest that Christopher Columbus, Vasco da Gama, Marco Polo and other great travelers and explorers had.

According to physicist Stephen Hawking, although aliens are unlikely to destroy our planet – it is more likely that they will try to use its resources they may be in need for – mankind could still be affected by adverse impacts, similar to what the Aztecs had experienced when the Spaniards decided to force them to live according to European civilization’s rules.

Sci-fi literature and motion pictures often assume that aliens can never conquer Earth because their immune system will be extremely vulnerable to Earth’s viruses and bacteria.

Indeed, in case of the aboriginal race and the conquistadors, this is exactly what happened – the Spaniards became exposed to syphilis and other diseases of the Americas, which caused epidemics with considerable fatalities caused to the population of Europe.

According to Seth Shostak, the «SETI» Project manager, Earth’s viruses are unlikely to cause any harm to aliens because germs and bacteria which are dangerous for humankind have evolved in the course of millions of years to adapt to live inside humans.

Earth’s bacteria and viruses rarely spread even among different types of species (e.g. influenza virus is absolutely harmless in dogs), and the structure of alien organisms is likely to be fundamentally different from the structure of a human body, therefore bacteria simply will not “understand” how to survive in aliens.

4. Aliens are unlikely to prey on humans 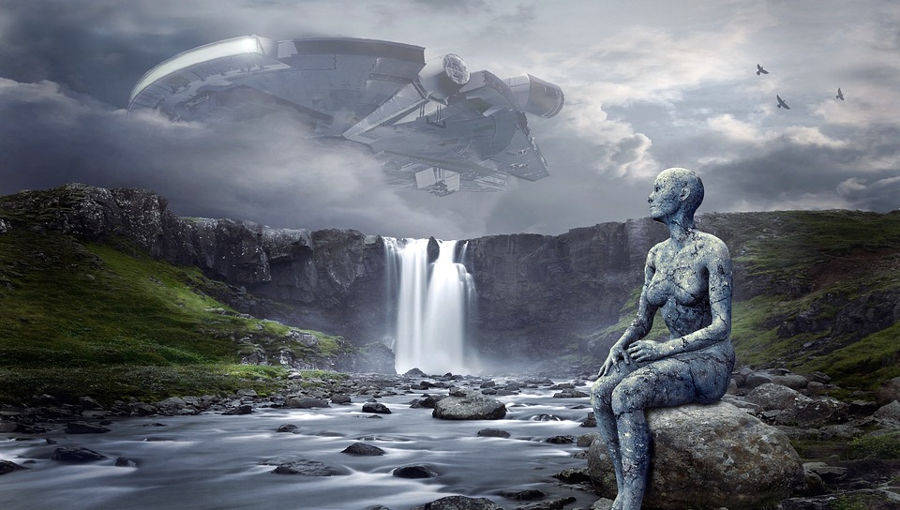 For thousands of years, mankind has been preying on other inhabitants of our planet and even breeds animals to be later “slaughtered”. The idea that aliens can do the same to humans instills horror and desire to resist any potential alien invasion to the last drop of blood.

Nevertheless, it is unlikely that human flesh will satisfy the discriminating taste of alien palates. Most likely, while preparing for a long journey, aliens will provide themselves with an ample supply of food and have the ability to produce more food, so they do not have to prey on humans.

In addition, protein-based food from Earth is unlikely to be compatible with the digestive system of guests from other planets, which is another argument in favor that space travelers will have their own food with them.

Advanced civilizations have always come to the conclusion that hunting and livestock are not the most effective methods of food production, so there will be no steaks from human flesh on the tables of hungry aliens.

You might have been in a situation when after renting or buying a house, you find cockroaches hiding inside one of the kitchen corners. Your further actions are easy to predict: first, you violently exterminate defenselessly and, by and large, harmless insects, then set traps everywhere and use chemicals to kill these insects, taking all measures possible not to share your living space with unwanted “pets”.

Similar terrible fate may befall humans. From the aliens’ point of view, the human race may be something similar to parasitic insects, and the new rulers of the planet may resort to a large-scale cleanup, after which they can start using the Earth’s resources. To get rid of human parasites on the planet, bacteriological, climatological or some other unknown to mankind weapon may be used.

6. Aliens are not insects!

Writers of horror movies and science fiction authors sometimes imagine alien invaders as humongous insect-like creatures. Aliens that look like giant beetles and wasps are probably the most terrifying and hideous creatures conceived by the human mind, but the scientific point of view dictates that such an assumption about the appearance of aliens is unsubstantiated. Rather, these representations reflect people’s fear of insect carriers of deadly diseases on Earth.

Due to the specific structure of insects’ bodies, the range of comfortable living conditions for them is rather narrow. Insects do not have blood, so they cannot get sufficient amounts of oxygen from the atmosphere; that is why they are so small.

Many millions of years ago, when the concentration of oxygen in the atmosphere was much higher, the size of some insect species reached one meter, but these giants quickly became extinct, giving rise to more adapted and self-efficient species.

You probably noticed that almost all aliens in books and movies are super-intelligent. This makes sense, otherwise, how would they be able to travel in space or try to take over another planet? However, aggression and bloodlust, which are usually attributed to aliens, just do not fit with the image of aliens as highly-intelligent beings.

If an alien civilization is in the advanced stage of socio-political, scientific and technological development, it is unlikely that its members would simply start a world war; this may bring more problems than benefits.

An alien mission will likely be not a military operation, but an invitation to a dialogue. Politicians from Earth and alien leaders will have to seek compromises and come up with ways for mutually – beneficial cooperation while preventing bloodshed.

No matter how wild or daring human imagination is, the look of fictional aliens is generally portrayed as resembling the human body. It allows filmmakers to create much more colorful and convincing scenes of interaction between humans and aliens.

When a “green man” is at least somewhat similar to an earthling, it makes us more sympathetic towards it, as opposed to towards creatures that look like a bowling ball (this particular look of aliens can be found in one of the novels by famous science fiction writer Clifford Simak).

Still, Simak’s visions are somewhat true in a sense that aliens could certainly be strikingly different from common animal species inhabiting Earth.

The look of any living being depends primarily on the environmental conditions, and we know little about climatic conditions of inhabitable planets in other galaxies, so if contact with their inhabitants takes place, it will be a big surprise for mankind to see what they may look like.

The level of development of any civilization is largely determined by the level of advancements in communication. Technological and social progress of recent decades has allowed to take information exchange among humans to a completely different level, information became a highly valued commodity and with every year there is a growth in the volumes of data transmitted.

Every day, people have to solve a lot of problems associated with language barriers and the ways of thinking in different countries, but in general, any individual on Earth would be able to communicate with someone from another country or continent using, for example, gestures or pictures.

If aliens visit Earth, primarily to build relationships with people, they (and we) will need to come up with a method of information exchange which is accessible, acceptable and understandable for all involved in the interplanetary dialogue.

It seems to be complicated further because we have no idea how aliens communicate with each other. So an invention of, for example, a translating device from English into some alien language may become very problematic because aliens may use electromagnetic waves or telepathy to communicate.

10. Do not expect to be visited by alien “bodybuilders”

Many fans of films and books about aliens will surely be disappointed after finding out that burly, strong and devilishly clever alien monsters, envisioned by some of the writers and creators of these films, most likely do not exist.

When a civilization reaches advanced levels of technological development, physical development of its members gradually slows down. For example, in order to survive, our ancestors had to have strong muscles and agility, but many people today prefer not to bother themselves with physically demanding activities because they do not need to hunt a mammoth to find food.

With the increasing energy efficiency of the body, the number of muscles has been steadily decreasing, simultaneously compensating this by the development of the brain.

This phenomenon, in particular, was mentioned by Herbert Wells in his famous “The War of the Worlds“, and his Martians had an extremely well-developed brain, but the body was mainly adapted to manipulate buttons and levers to control various devices, such as combat tripods described in the novel.

Notwithstanding the fact that aliens are most likely to be lacking considerable physical strength, they would probably still have one or more limbs, with functionality similar to a human hand.

In order to achieve certain advanced levels in science and technology, intelligent beings must be able to manipulate tools and equipment with dexterity, and for this, they need truly “capable hands”, i.e. limbs capable to perform accurate and carefully planned movements.

Tools are being constantly improved, their handling becomes more simplified, and their capabilities expand, but this does not always lead to degeneration of skills related to fine manipulation of objects.

For example, spears and swords are rarely used nowadays as weapons, they are replaced by nuclear warheads and drones, but every adult knows how to use them, even though not to perfection.