Creepy mysteries make life more interesting wouldn’t you think? They fill us with dread but strengthens our hope for the extraordinary.

Urban legends and scary stories always fascinate us, either because they make a boring evening with friends much more interesting or just because they dilute our everyday life with a mysterious sense of the unknown which makes us shudder. In other words, creepy mysteries add a new dimension to the ordinary.

Here are five stories of real events, based on oral narratives, which are not widely known but are extremely interesting.

In February of 1948, many ships sailing off the coast of Indonesia recorded urgent distress signals from the Dutch frigate SS Ourang Medan. The chilling message said:

“All officers and the captain are dead on the deck and on the bridge. The entire crew is probably dead“.

Then, incomprehensible Morse signals came and finally turned into the phrase, “I am dying“. When the rescue team was approaching the ship a few hours later, the scene they saw was indescribable: all the crew was lying dead with eyes open and faces turned towards the sun.

Their hands were extended and their faces had an expression of unspeakable horror. Even the ship’s dog was dead, and as the rescue team was approaching the overheated boiler, they felt a tremor.

Suddenly, a plume of smoke appeared, and the team had barely enough time to disembark before the Ourang Medan exploded and sunk. Sixty-four years later, the mystery of horror on the frigate remains unsolved.

Felicia Felix-Mentor died in 1907, after being hit by a sudden illness. She exhibited the same symptoms of which coincided with Haitian myths about turning into… zombies.

About 30 years later, the woman appeared to be wandering the streets of the area: some said she was naked, others claimed she was wearing ragged clothes and was going to a farm, which used to belong to her father.

The farm owner recognized the face of the deceased Felicia Felix, which was later confirmed also by her husband. Due to her unhealthy look, she was moved to a government hospital. The doctor who examined her said,

“Her occasional outbursts of laughter were meaningless, and very often she talked about herself, either in first or third person, without realizing the difference. She had no sense of time and was quite indifferent to those around her“.

In 1855, in the provincial town of South Devon, England, winter was quite harsh and snow-covered the whole country. On the night of February 8, tracks similar to those of animals appeared on the white surface. The footprints had a depth of about 6 cm and a distance between them of 20 cm and continued their strictly straight path for 160 km.

The strange tracks passed over any obstacle that laid in their path, leaving imprints there as well. The footprints were found on rooftops, on frozen river surfaces, in hay bales… Therefore, there were many witnesses that saw a “diabolical figure” appear in the Devon area in those days.

Recently, in March 2009, similar tracks reappeared in the same area.

On September 3, 1873, James Worson was running a great distance between Leamington and Coventry and had to pass through a forest. Two of his friends, Hammerson Burns and Barham Wise, decided to follow behind him with a carriage, holding a camera in hand. While the first kilometers of the route flowed normally and they were constantly watching Worson, suddenly, they saw their friend stumble and stoop forward, ready to fall.

But rather than see him fall on the ground, the two friends heard the most chilling scream lasting a few tenths of a second. And just before facing the ground Worson… disappeared.

Nobody ever knew what happened to the runner, while the camera carried by his friends suddenly stopped working at the point of disappearance. Police dogs, for some reason, wouldn’t even approach the exact location of his disappearance.

The ghost in the photo 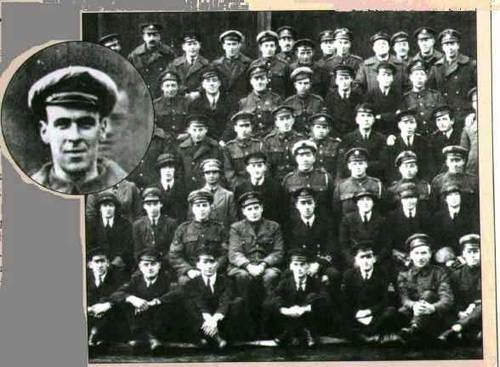 The last one on our list of creepy mysteries is the chilling picture that you can see above. It was taken in 1919 and came to light only in 1975. The photograph depicts the RAF group who took part in World War I. If you’re wondering what’s so creepy about the image, take a look at the “pale” figure half-hidden behind the person in the circle.

This is Freddy Jackson, British aviation engineer, who, according to all testimony, had died in an accident on a propeller aircraft two days before this photo was taken. Indeed, the funeral was celebrated on the day the photo was taken.

These are far from the only creepy mysteries recorded in history. There are many other stories that will make you think twice about the reality you live in today. They will most certainly keep you entertained and filled with curiosity about the supernatural.