Anyone interested in science knows that it takes carefully constructed experiments to produce results. Or does it? You might be surprised, as I was, to learn that between 30 and 50% of all scientific discoveries occur by accident.

But there is something extraordinary about these accidental discoveries. They may have started out as an accident, but they have occurred because scientists and researchers paid attention to unusual or unexpected results.

“The most exciting phrase to hear in science, the one that heralds new discoveries, is not ‘Eureka!’ but, ‘That’s funny … ‘ ” – Isaac Asimov

Here are 12 of the most fascinating accidental discoveries that changed our world. 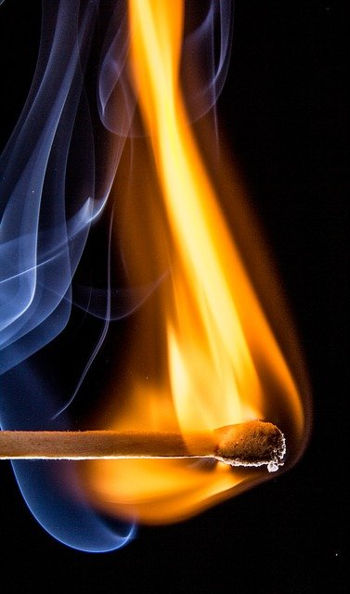 English chemist John Walker loved to experiment with different chemicals in his laboratory. He would mix up batches to see how they reacted with each other. His latest concoction was a mix of antimony sulphide and potassium chlorate.

This was a particularly sticky mixture that covered the end of his mixing stick. As he attempted to scratch it off, it burst into flames, shocking the chemist. He had just invented the world’s first match. They were marketed as ‘John Walker’s Friction Lights‘.

Russian chemist Constantine Faglberg was working at the prestigious John Hopkins University in Baltimore. He was tasked with analysing the chemical properties of coal tar.

One day he forgot to wash his hands and at lunch was eating a bread roll when he noticed that it tasted ‘unspeakably sweet’. He wiped his mouth with a napkin to get rid of the sweetness, but the napkin was sweeter than the bread. He took a drink of water which tasted like syrup. Luckily, he made the connection between the coal tar he had been working on and the sweet taste.

He had accidentally discovered saccharin. Saccharin is 300 – 400 times sweeter than sugar.

American biochemist John Pemberton had suffered a near-fatal wound in the American Civil War. It left him in constant pain and he had become addicted to morphine. He had been experimenting for years, trying to invent an alternative painkiller, to be free of his addiction.

He came up with a syrup connection of coca leaves and cola nuts. In a serendipitous accident, his laboratory assistant mixed the syrup with carbonated water and the first version of Coca-Cola was born. It did not cure headaches and Pemberton died before he could see the impact his simple syrup would have on the soft drinks industry.

In 1895, German physicist Wilhelm Roentgen was experimenting with cathode ray tubes when he noticed a strange phosphorescence on a nearby screen when the room was dark. He didn’t want this glow disrupting his experiment, so he tried blocking the rays from the tubes, but nothing worked.

Then, incredibly, when his hand passed across the tube, he saw bones appear on the screen. Roentgen had discovered the modern X-ray.

Sometimes all it takes is a bit of bad weather to create the ideal conditions for an accidental discovery. French scientist Henri Becquerel had heard about Roentgen’s recent discovery of x-rays. Becquerel wanted to further the study of phosphorescence. He believed uranium crystals were capable of absorbing sunlight and producing an image.

He ran experiments and the results showed the crystals produced outlines on photographic plates whether the sun could reach the plates or not. He took this as evidence that the crystals absorbed the sun to produce images. Then the weather turned cloudy so he shut the plates and crystals away in a darkened drawer. When he returned, the image on the plates was remarkably clear.

Becquerel had discovered, by accident, that uranium emits radioactivity.

My next accidental discovery really did come about – by accident. French scientist Edouard Benedictus had been experimenting all day with a cellulose nitrate compound. Perhaps he was tired and ready to call it a day. Whatever the reason, he accidentally dropped the flask containing the compound mixture.

To his surprise, when the glass broke, it did not shatter into tiny pieces. Instead, it maintained its original shape. Benedictus believed that the mixture had coated the inside of the flask and somehow had helped to stop the glass break. He had just invented shatterproof glass.

Probably the most famous of all accidental discoveries is penicillin. In 1928, Scottish biologist Alexander Fleming left a petri dish open on a workbench for a week while he was away on holiday. When he returned he noticed a green-blue mould had grown. The mould had eaten the bacteria on the dish.

If Fleming had thrown the dish away, we may not have the powerful antibiotic penicillin, the precursor to modern medicine.

Don’t you find those sticky burrs that cling to your clothes when you are out walking irritating? Swiss engineer Georges de Mestral found them fascinating. After one hiking trip, he returned covered with the beastly things. The very fact that they would stick to anything gave him an idea.

Perhaps if he could see how they worked, they could be useful as a type of fastener for clothing. He studied the burrs and saw that they had hooks that would attach to anything that was a loop. All he had to do was replicate the hook and the loop and Velcro was invented.

In 1945, American engineer Percy Spencer was working for a radar company. Radars work by radiating a beam of electromagnetic energy into space from an antenna. This scans an area and pings back if it hits an object.

Spencer was working on a magnetron tube that could fire high waves of energy. As he walked past the tube, he noticed that a bar of chocolate in his pocket had mysteriously melted. This piqued his curiosity.

He put un-popped corn next to the tube and it began to pop. This was the start of microwave technology, although the first microwave stood at 5ft tall. It would take a few more years until the compact version we know would become available.

It started like any other ordinary day for American chemist Harry Wesley Coover Jr. But when a new substance he had been working on destroyed an expensive lens, he thought he had lost his job.

The substance was supposed to be heat-resistant and protect the lenses of gun-sights for jet-aircraft. Instead, when he applied the new acrylate, it stuck the lenses together and they could not be separated. Although they were ruined, Coover saw the potential for this substance. It took 7 years to market the first version of Superglue.

American engineer and inventor Wilson Greatbatch loved twiddling around with electronics. Ably assisted by his wife – Eleanor, he was particularly interested in inventing a new machine that recorded human heartbeats. This would help people to diagnose people who had fast or irregular heartbeats.

However, as he was building the machine, he accidentally inserted the wrong part. Instead of recording, the machine emitted an electric pulse of its own. Greatbatch realised the significance of what had just occurred. He had the makings of a pacemaker.

Men all over the world owe a debt of thanks to one particular nurse on duty during a clinical trial of a new heart medication drug. She was not the kind to get embarrassed about bodily functions.

In the early 1990s, clinical trials were underway to test a drug for cardiovascular problems. The drug was supposed to dilate the blood vessels in the heart. All was well, there were no side effects, but this nurse noticed something peculiar.

Many of the men would lie on their stomachs when she entered the room to carry out her observations. This became so common that she pressed them further.

It turned out the drug did have an interesting side effect – the drug dilated the blood vessels in the men’s penises. The men were experiencing an erection. This accidental discovery led to the isolation of the active ingredient and a new lease of life for many men.

Isn’t it amazing that some of the most significant scientific discoveries have come about by accident? Perhaps we should all pay a little more attention when things don’t quite go to plan.