Do you always place a high value on the opinions of others or please others before yourself? You might be showing signs of approval-seeking behavior.

Why Do We Seek the Approval of Others?

Of course, we all like approval. It reinforces that what we’re doing is right. It builds our self-esteem. We feel confident when someone agrees with us. When they congratulate us on a project well done.

We feel validated when our family approve of our latest partner. If our manager notices the long hours we’ve put in we go home with a sense of achievement. In all, approval from others does much for our confidence.

In fact, it helps to shape our identity. For example, at school, I was a shy fish out of water. I had no friends and ran away twice because I felt so unhappy. Then one day, I went to my first history lesson and met the teacher.

Over time, she coaxed me out of my shell; encouraging me to speak out in class and be myself. I began to blossom. I knew she wanted to help me so I tried harder than ever in her class.

One week, I managed to get the highest mark in the class for my essay. Her approval gave me the confidence to know that I could do just as well in other subjects.

We all want to be liked. Some of us think that this means we have to always say yes when people ask us to do something for them. In fact, it takes a bit of courage to say, ‘Actually, I’m sorry, but I can’t do that right now.’

Whether it’s the boss that always expects you to work the late shift or your partner that never does the housework. Saying yes all the time doesn’t earn you respect. It certainly doesn’t make others think you are a nice person.

So the next time someone tries to take advantage, try this if you can’t bring yourself to say no. Simply tell them that you’ll need to think about it and you’ll let them know.

I have a friend who will start off on one side of the argument then end up on mine. Now, I’m not blowing my own trumpet here. I’m not some great raconteur like Gore Vidal. Nor am I particularly known for my fabulous debating style. And I’m not saying I’m always right.

In fact, my friend has a habit of changing her mind whoever she’s talking to. She’ll start off with a fairly innocuous statement to test the audience. Once she has the measure of the crowd, she’ll become more and more vocal in her opinions.

The sad thing is that she thinks she’s fitting in with the rest of us. But we all know what she’s doing. There’s nothing wrong with having a strong opinion, so long you’re open to other ideas.

All we have is who we are. We all know the sayings; stuff like ‘You have to love yourself before anyone else can love you.’ Well, guess what, it’s true. So if you act in a fake way, how can anyone know your true self?

There’s something extremely attractive about a person who likes who they are. Someone who is happy and content in their own skin. A person happy to share their opinions; one who listens to others and gives out their knowledge. Someone who isn’t afraid to let others see who they are. Be that person.

It’s far more attractive than the chameleon that bends and changes to suit everyone else.

I bought a second-hand car a couple of years ago from a used car dealer. As we were finalising the details, he asked me what I did for a living. I told him I was a writer and said I written a book.

He asked about the subject. I said the topic revolved around the HAARP institute in Alaska, and had he heard of it? Oh yes, he said. I was surprised. No one had ever heard of it. I knew from the way his eyes panicked for a second that he hadn’t either.

The thing was, I wasn’t expecting him to know. He would not have looked silly if he’d said that he didn’t know. In fact, it’s an interesting subject and I could have told him about it had he asked. Perhaps he exhibited this type of approval-seeking behavior because he wanted me to buy the car.

Remember, no one can possibly know everything about everything. And there’s no such thing as a stupid question.

When there was a bombing at a concert in Manchester in 2017, many people took to social media to vent their sadness and outrage. I found out some time afterwards that a neighbour had attended the concert. She had not posted anything on Facebook. She didn’t dramatise anything. She spoke to me in private about the bravery of the police and emergency services.

On the other hand, a friend of a friend posted, in dramatic fashion, the day of the attack, that she was due to go to Manchester that day but had a cold so she stayed at home. She was not going to the concert. She was simply supposed to be working in Manchester. Comments included ‘I’m so thankful you didn’t go babe!’ and ‘Gosh your family must be so grateful!’

Trying to make everything about you is not the way to gain approval. Showing empathy for others is.

This is one kind of approval-seeking behavior that is particularly insidious. Of course, we all talk about people when they’re not with us, but there’s a difference if we’re badmouthing someone. I always think that if someone is happy to spread gossip about a friend to me behind their back, then they’re quite willing to do it about me.

If you have to raise your self-esteem by trampling all over your friends, then shame on you. I would have far more respect for the person that stuck up for their friend that the person spreading the gossip. Loyalty is a much better quality to have than a knife in the back.

In today’s society, fishing for compliments has become a national sport. In fact, it is so acceptable that we think nothing of those the endless stream of edited selfies. We rush to comment ‘Are you ok hun?’ when we view the hospital picture of a hand stuck with a cannula but no explanation. We message frantically after reading posts such as ‘I can’t take this anymore.’

Really? Children are starving, there are wars happening all over the globe, animals are suffering, and you want the attention? You need people to like your latest picture? If this sounds like you, why not try building up your self-esteem by doing things that make you feel good instead. You don’t need approval from other people. Just be yourself.

To Stop Approval-Seeking Behavior, Work on Your Self-Esteem 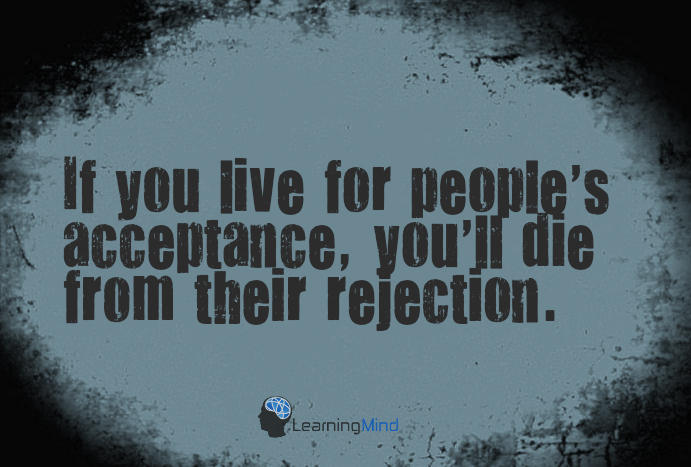 If you live for people’s acceptance, you’ll die from their rejection.
-Lecrae Moore

People value truth, honesty, and authenticity. If you really seek approval, then you have to first approve of yourself.