Aristotle’s tomb has been finally found!

The burial site of one of the most important figures in the history of Western civilization is no longer an enigma. A group of archaeologists recently announced that they have discovered Aristotle’s tomb. Near the Agora of the ancient town of Stagira, a team of scientist who worked together found a structure they have reason to believe is the tomb of Aristotle.

The famous Greek thinker was 62 at the time of his death, he lived from 384 BC to 322 BC. Death found him in the city of Chalcis, and up until now, it was believed that this was the place where his earthly remains were. Besides his writings, the history remembers him as a teacher of one of the most powerful people of all time.

He tutored the son of the King Philip II, a mighty ancient Macedonian King, and his pupil was none other than Alexander the Great, the greatest conqueror of all times. He tutored the young prince for seven years and his influence on him was immense.

It was Aristotle who first introduced young Alexander to art, culture and diplomacy, and we can consider him partially responsible for the period in art that history remembers as Hellenism. The two remained in contact through letters long after their teacher-student relationship ended.

Aristotle’s influence spreads across the millennia because he was equally important in the 9th and the 19th century. His philosophy inspired countless philosophers, painters and writers, but until recently nobody knew where his grave was. Greek archaeologist Kostas Sismanidis dedicated a tremendous amount of time and energy to the quest of finding the tomb of the great philosopher. He spent more than 20 years looking for the crypt in which Aristotle was buried.

His team unearthed a structure that has a 10-meter dome and its floor is made out of marble. Both of these features are distinctive of the Hellenistic era architecture. Despite all of this, there is no hard proof that this is indeed Aristotle’s tomb. Sismandis said to the media:

I have no hard proof, but strong indications lead me to almost certainty.

We had found the tomb. We’ve now also found the altar referred to in ancient texts, as well as the road leading to the tomb, which was very close to the city’s ancient marketplace within the city settlement.

He believes the philosopher’s ashes were moved from the city of Chalcis on the island of Euboea after his death, and that people of his hometown made this monument in order to honor the great man. His theories are supported with several literary sources from the period. The site of Aristotle’s tomb has a panoramic view overlooking the sea and it can be easily approached by a large number of people.

This small mausoleum consists of a semicircle wall and a pathway that leads into the monument. Archeological evidence suggests that the construction was done in a haste and better materials were added at a later time. Within the tomb, the researchers found the coins from the period of Alexander the Great alongside some pottery that was made in royal workshops. It is believed that the Byzantines destroyed the monument in order to make way for the new town square. 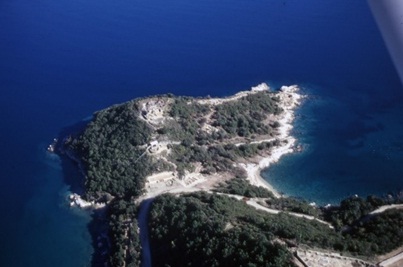 The importance of the discovery was highlighted by the official of the Greek’s ministry of culture Aristides Baltas  who said to the following in his statement to the Guardian:

A team of independent archaeologists with no connection to a particular school or department have been working at the site. What we know is that their excavation has been meticulous and we await further details with great anticipation.

Archeological excavations such as this one enrich the world’s cultural heritage and help us see the past of our own civilization from a new perspective. Despite all of his books that survived until the present time, the scientific community still doesn’t know much about Aristotle and this discovery allows scientists to get some insight into the life of one of the most influential philosophers in history.

Zeljko Dražović, B.A.
Contributing writer at Learning Mind
Željko Dražović is an artist who holds a bachelor's degree in art history from the University of Belgrade. He balances between his work as a writer and a photographer. He is probably at his best when he combines words and images. Željko is known for his passion for underground art. He has collaborated with a number of respected art institutions and likes to share creative energy with others. His view may be avant-garde, but deep down, he is a book-loving guy who enjoys researching and constantly discovers new things.
Latest posts by Zeljko Dražović, B.A. (see all)