Apart from a unique historical monument of the Middle Bronze Age, Arkaim is known as one of the strongest “anomaly zones” in Russia. But when, why and by whom was this prehistoric site of unusual circles constructed?

Arkaim (Аркаим in Russian) is located north of the Russian borders with Kazakhstan, in the Southern Urals steppe. Several dates of construction have been proposed, however, the most dominant is the one suggesting the 17th century B.C.

It was in 1935 when military aerial photography in Chelyabinsk, in the Southern Urals, revealed several unusual circles covering a region more than 640 km long. Back then, no one could explain how they were constructed, and as a result, it was considered a mystery.

Based on this first official sighting of Arkaim, during the 1960s scientists identified a complex of 17 fortresses. At the same time, a study on ancient peoples of the Eurasian steppe begun. In 1987, Arkaim was rediscovered under the guidance of archaeologist Gennadii Zdanovich, who was in charge of the excavation campaign.

Arkaim is the remnants of an ancient village that was fortified by two large stone circular walls. The circles of dwellings were separated by a street that had a central square in the center.

The outside massive wall is 5,5 meters high and 5 meters wide with four gates. The city was burned to the ground, so the full extent of the remains is now becoming apparent. However, archaeologists have unearthed pottery covered in swastikas, the symbol of life and eternity.

Arkaim is also known as the “Swastika City” because, according to a theory, the shape of the dwellings around the square reminds that of a swastika, although with rounded arms. Moreover, it is referred to as “Mandala City”, as the area is believed to be the region where the Aryan race resided.

Certain archaeoastronomers believe it was built with astronomical observation in mind, suggesting a connection with Stonehenge, however, this theory is not universally accepted. Local people have reported UFO sightings in the area while others believe in the positive energy of nearby Shamanka and Grachinaya Mountains. 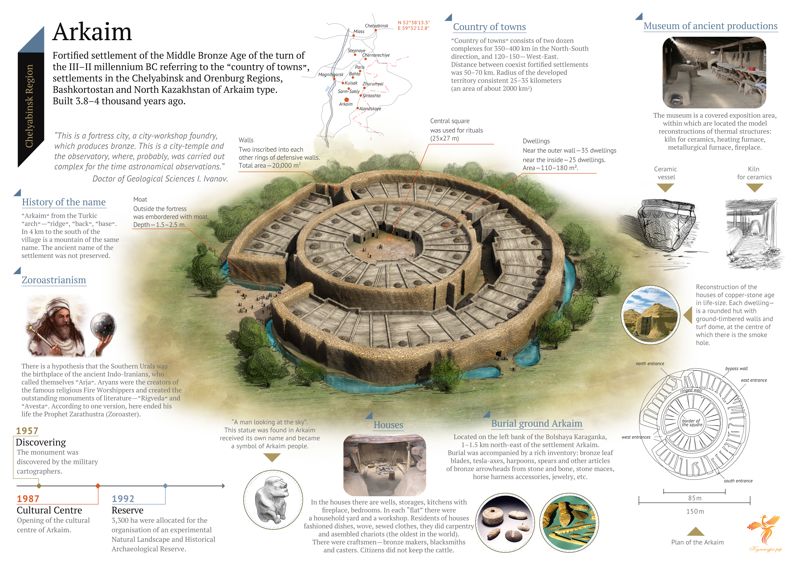 Today, Arkaim is an archaeological site as well as a pilgrimage. Hundreds of people visit it every year and coat themselves with clay to treat skin diseases. According to local people, Arkaim is a sacred place.

Up to now Arkaim, Stonehenge, and the Khazar city of Sarkel are only a few of the widely known historic settlements. However, even more interesting sites will hopefully be revealed in the near future.