We live in a day in age where we have the world at our fingertips; all of the knowledge we could ever want to seek is ours for the taking! Anything we can dream up, we can achieve.

Life can be full of excitement and possibilities; yet, we are societies plagued with violence, depression, and addiction. We medicate ourselves; drowning our emotions and our thoughts. We drink away our pain, sorrow, and stress until we are no longer consciously living.

We don’t search for purpose or for answers, we just wander around, lost. Living dead zombies in flesh covered “shells.” Why is this becoming a cultural “norm?” The mind is such an unbelievably, incredible thing capable of more than anyone could imagine.

“You are an explorer, and you represent our species, and the greatest good you can do is to bring back a new idea, because our world is endangered by the absence of good ideas. Our world is in crisis because of the absence of consciousness.”

One of the most fascinating topics I have ever researched is that of psychedelic substances, especially Psilocybin.

Psilocybin is the active component of “Magic Mushrooms” capable of producing a wide range of hallucinations and effects and according to recent research, vast amounts of mental, physical, and spiritual well-being benefits.

We have all heard tales of the “Peace and Love” of the 1960’s psychedelia culture. The topic of psychedelics is nothing new; activists such as Timothy Leary and Terence McKenna have praised their healing abilities for decades. Not to mention, the ritual use by Shamans and various spiritual healers.

And even though strict drug laws put a stop to much of the early research, the subject is gaining more and more, well deserved “looks” by the medical community these days and the results are intriguing!

What’s with all the fuss, then?

As previously stated, psilocybin is the active chemical component of psilocybin mushrooms (aka “Magic Mushrooms”). It is similar to other psychedelics, such as LSD, DMT, and Mescaline.

When ingested, psilocybin is converted to psilocin, a powerful tryptamine compound, very similar to the neurotransmitter, serotonin (you know the “happy/feel good” one). It mimics the effects of serotonin as well by binding to the 5-HT2A receptors in the brain. This is what causes much of the drugs “mind-altering” effects.

These effects can range from mild to intense depending on the dosage and last anywhere from 2-8 hours.

Common effects include: an overall feelings of euphoria, a buzzed feeling similar to that which occurs when alcohol is consumed, distorted perception of time (as if time stops), vivid memories, audio perceptions seem more intense such as music sounding fuller, visual senses and perceptions intensify as well making colors appear much more intense and vivid, all senses and consciousness appear to be heightened and intensified and visual and mental hallucinations can occur due to perceptual changes.

Many people report a heightened sense of creativity while others suddenly see their lives in perspective. It’s not uncommon for those whom are deeply spiritual to report having strong, meaningful spiritual visions and experiences.

On the flip side, there is also the risk of a “bad trip.” Anything from, nausea, vomiting, anxiety, and paranoia can result if the “set and setting” isn’t in ideal conditions. The “set and setting” being a safe, positive and relaxing environment free of children and other distractions. It is also said that the state of mind of the person needs to be, and remain, as positive as possible to avoid any negative effects.

While these negative effects have the potential to occur, most people will have positive experiences. It’s also worth noting that risk of death and toxicity is virtually non-existent and psilocybin is a non-addictive substance with no negative, long-term effects.

What about this groundbreaking medical research and health benefits?

Studies have shown that psilocybin can treat and prevent headaches, especially cluster headaches. Cluster headaches affect millions of people and so severely that daily life can be difficult, if not downright impossible.

Halpern stated, “There was nothing published on psilocybin and LSD for cluster headaches. I thought it would be important to get something into the literature.”

Halpern went to Germany to test out a non-hallucinogenic 2-Bromo-LSD (chemically similar to LSD and psilocybin) due to the tough laws to research hallucinogens here in the states. The results were amazing; one patient who suffered up to 40 cluster headaches a week for 27 years was able to go 17 months without one single headache after his treatment.

Of course, this is bad news for big pharma and therefore headache suffers.

In summary, “psychedelics work so well, you take fewer doses. That’s a problem. They work too well to attract the research,” says Halpern. “I know that there are lots of people using psilocybin and LSD. But if we got Bromo to market, they wouldn’t have to do that,” stated Halpern. “If patients are using mushrooms and LSD underground, it’s because “the system has failed” to develop a non-psychedelic option, like 2-Bromo-LSD. “It’s as close to a functional cure as possible.”

In a study from UCLA in 2011, psilocybin helped late-stage cancer patients deal with depression and anxiety. All 12 patients ages 36-58 showed dramatic long-term improvement in mood where typical anti-depressants and sedatives failed.

In another study from John Hopkins University (the longest running psilocybin research trial), showed 36 volunteers (with no prior psychedelic use) to have dramatic benefits from a high dose of psilocybin. 60% of volunteers reported having a “full mystical experience” and after 14 months most reported continued improvement in overall mood and wellbeing.

Some volunteers stated that it was one of the top 5, “most personally significant experiences of their lives” next to marriage and the birth of a child. In a separate group of volunteers, which were interviewed a year later, the study showed that an overall openness to new ideas and feelings were achieved. This is something not often seen in adults over 30 years of age.

A recent study also showed that psilocybin blocks off a part of the brain that is overactive in people with depression. According to Professor David Nutt, professor of neuropsychopharmacology at Imperial College London, the drug appears to stop patients dwelling on themselves and their own perceived inadequacies.

“People with depression have overactive default mode networks and so ruminate on themselves, on their inadequacies, on their badness, that they are worthless, that they have failed – to an extent that is sometimes delusional. Again, psilocybin appears to block that activity and stops this obsessive rumination.“ 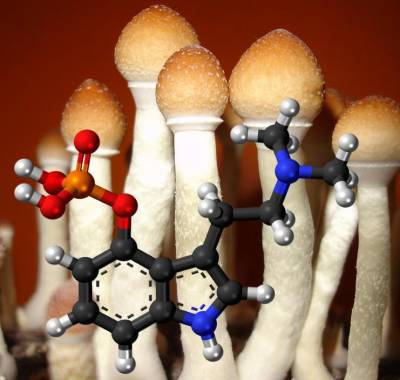 Studies have been limited thus far, but it seems as though that the promising experiences and lasting impacts on mood and well-being have been responsible for the “mind-set” needed when battling addiction.

The Beckley Foundation with collaboration from John Hopkins has a psilocybin-facilitated addiction program. The program is a psychotherapy program that uses psilocybin to help with the treatment of addiction.

According to the Beckley Foundation, “Entheogens, such as Psilocybin, can bring about mental states that are indistinguishable from the mystical and visionary states (Griffiths et al., 2008). This research has suggested that the mystical/spiritual experiences that psilocybin can promote might be integral to the efficacy of psychedelic-assisted treatments of addiction. This idea is supported by the last phase of psychedelic research 40 years ago, which highlighted addiction treatment as one of the areas in which psychedelics showed the greatest potential benefits. The states of consciousness associated with Psilocybin use may provide a valuable opportunity to overcome addictive behaviours.”

It certainly seems as though psilocybin is gaining the recognition that it truly deserves, but we are still far from having this substance legal and in the hands of many people who could benefit from it greatly.

Amie Moses, B.Sc., B.A.
Contributing writer at Learning Mind
Amie Moses holds a bachelor of science degree in Natural Science and a bachelor of arts degree in Psychology. She is a blogger, photographer, and musician. She is completely fascinated by the human mind, (especially personality, perception, and consciousness studies) and the physical as well as the metaphysical universe. She is a seeker of knowledge and of “self” and she loves to help others on their quests as well.