What is it about fairy tales that captivate the imaginations of children? Could it be that underneath the thin veneer of fiction lies a much darker truth to the tales? Did you know that the most famous fairy tales are based on gruesome real-life stories? Here are just a few:

Famous Fairy Tales and the Creepy Real Stories Behind Them

I loved this fairy tale as a child. So much so that I would beg my sister to read it to me every night before bed. I knew it off by heart and sometimes she would try and skip a line or two. Whenever she did, I would tell her off.

The story is pretty awful as a famous fairy tale in its own right. A king named Bluebeard marries a beautiful young princess and takes her to his magnificent castle. He gives her the keys to all the rooms in the castle but tells her not to open the last door in an underground chamber.

He then goes off hunting and of course, naturally inquisitive, the young queen goes down to the room and opens the door. Here she finds blood everywhere and the king’s previous wives, murdered and hanging on hooks.

Horrified she drops the key in the blood and tries to wash it off. But the blood won’t come off. Will she face the same fate? Luckily, her brother races to her rescue in time to kill Bluebeard.

This famous fairy tale is based on two real-life characters. Conomor the Cursed is a savage 6th-century ruler in Breton. This Breton chief had been warned that one of his sons would end up killing him. As a result, he pre-empts this by killing all of his pregnant wives.

However, his last wife, Tryphine, is also warned by the ghosts of the murdered wives. She flees but he finds her and beheads her. Miraculously, a sacred monk brings her back to life and when they return to Conomor’s castle the walls collapse around him.

The second character is the 15th-century nobleman and notorious serial killer Gilles de Rais. This man earned a formidable reputation fighting alongside Joan of Arc. Yet, in his private life, he murdered children.

He was given the nickname of Bluebeard because of the peculiar way his horse’s mane looked blue in the daytime. Gilles de Rais is one of the world’s most evil psychopaths. 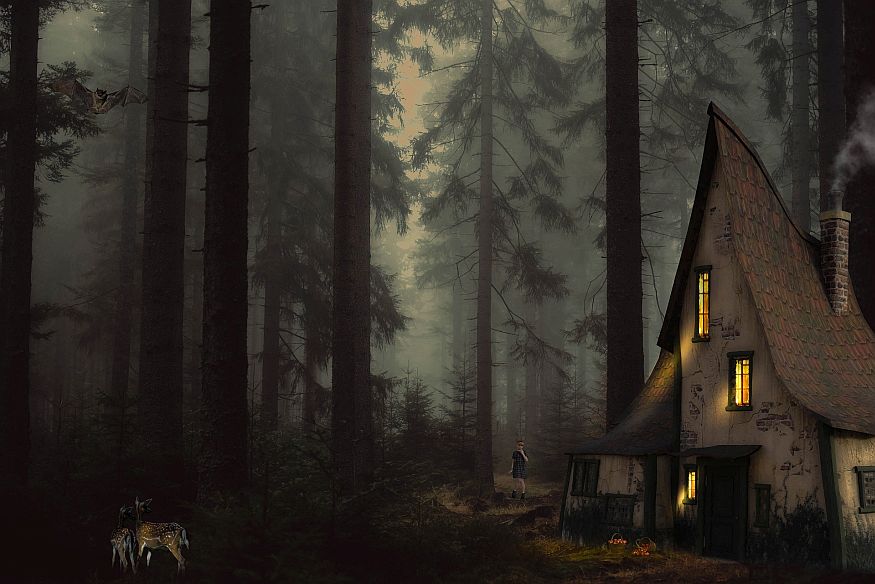 This is one of those fairy tales that is famous because the story resonates with children today. It tells of a poor woodcutter and his second wife. She is the stepmother to his children – Hansel and Gretel.

As food becomes scarce, the stepmother decides there is not enough food for the children. So she persuades the woodcutter to take the children deep into the forest where they won’t be able to find their way home.

They come across a witches’ house made of gingerbread. Eventually, they get the better of the witch and return home with the spoils of her house.

The story is set during the Great Famine of 1315. Many people starved to death during this time. Acts of extreme cruelty, such as infanticide and cannibalism, took place as people became more desperate. The situation for some families became so wretched that they left their children to fend for themselves.

The gingerbread house part of the story comes from a highly profitable baker called Katharina Schraderin. She became legendary in the 1600s thanks to her gingerbread cookies, which everyone wanted. One male baker was so determined to get her recipe he accused her of being a witch.

As a result, she was hounded and driven out of the town. But, then in an awful twist, her neighbours brought her back and burned her to death in one of her baking ovens. 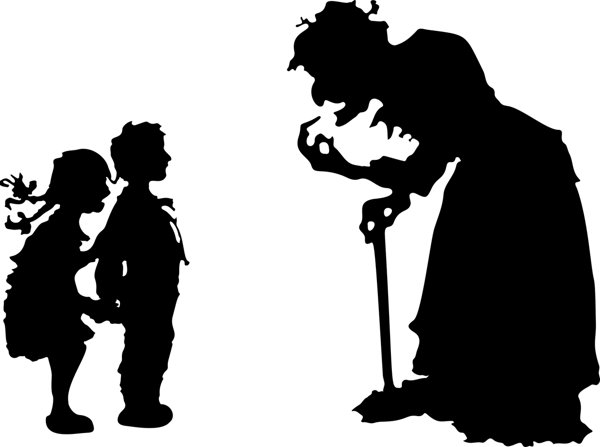 Cinderella is every young girl’s dream, right? Well, perhaps not mine, as you’ve already heard, I was getting a taste for psychopaths and sociopaths.

Everyone knows in this famous fairy tale that Cinders has a tough life. She has to do all the chores, look after her evil stepsisters, and might miss out on the Ball. But, it all comes good in the end. She gets the gorgeous frock, she arrives in a splendid carriage and meets Prince Charming. Furthermore, the story has a happy ending.

However, the real-life tale is not so pretty and there’s no happy ever after for Cinders. The story is based around a slave girl in ancient Greece, around 500BC. Rhodopis was a beautiful young Greek woman. At a young age, she was taken from her home in Greece and forced into slavery.

Rhodopis was exquisitely beautiful and men lusted after her. As such, she became a prized possession and men showered her with expensive gifts. One of these gifts was a pair of golden shoes.

Pharaoh Ahmose II saw the shoes and Rhodopis and wanted her for himself. Although strictly she was not of royal blood, he married her. Her life was to be a ready and willing sex slave to the pharaoh.

Beauty and the Beast

This is one of those famous fairy tales that you wouldn’t expect to have a real story behind it. But it does.

In 1537, a young boy aged 10 called Gonsalvus, was taken from his home in Spain to the Royal French court. Here he was ordered to entertain the King of France. Why? Because he suffered from a condition called hypertrichosis. This causes someone to grow hair all over their body. It is called ‘werewolf syndrome’.

The king was enamoured with his little ‘beast’. He educated him and he became a nobleman. When the king died, his wife found the beast a wife. Despite his looks, the pair did fall in love. They had seven children (all of whom also suffered from hypertrichosis) and were married for 40 years.

‘Rapunzel, Rapunzel, let down your golden hair!’ I remember this story from my childhood. I kept thinking, why is she waiting for someone to come and rescue her? But the real-life story behind this fairy tale might explain it.

As unusual, we have the beautiful protagonist, this time it is an auburn-haired girl living in the 3rd century. Her overbearing father was a wealthy merchant who travelled abroad all the time. No man was good enough for his daughter so when he went off on his travels he locked her up in a tower.

It was during these times in the tower that she turned to Christianity to help her through the loneliness. Her praying was so loud the whole town could hear her. The rich merchant was a pagan. Her Christian prayers so angered him that he forced her to stand trial before a Roman consul to give up her religion.

The consul demanded the merchant give up his wealth or behead his daughter, should she refuse her Christianity. As she refused, and the merchant would not forfeit the fortune he amassed, he did behead her.

However, he was killed by a random lightning bolt shortly afterwards. The daughter was martyred and became Saint Barbara.

Snow White and the Seven Dwarfs

This famous fairy tale has a happy ending. Snow White is hunted by an evil queen who wants to kill her. Seven dwarfs rescue and befriend her. However, the reality is much different and far more gruesome.

The story starts in the 16th century in Bavaria. It centres on a young noblewoman called Margarete von Waldeck. Margarete’s brother employs small children to labour in his copper mine. But because of the crippling conditions, the children become dreadfully deformed. The locals begin calling them dwarves to mock them.

Now, if this wasn’t bad enough, Margarete was exceptionally beautiful. As such, her stepmother resented her and wanted her out of the picture. She packed her off to Brussels to get rid of her.

Here, Margarete began a lustful affair with Prince Philip II of Spain. However, his father, the King of Spain vehemently disagreed with the romance. He organised a plot to kill Margarete. She was poisoned shortly afterwards.

The Pied Piper of Hamelin 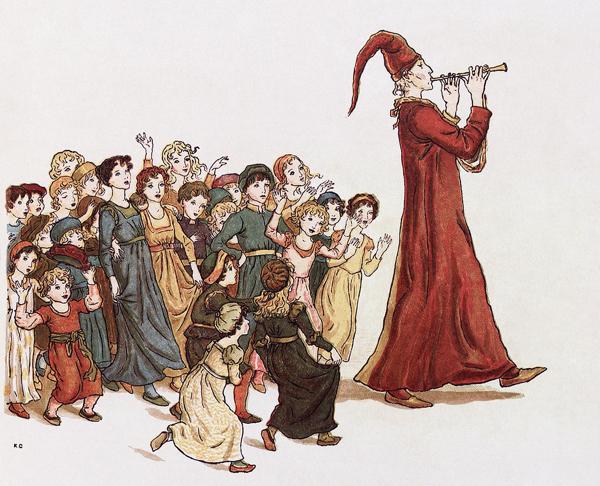 A pied piper in Hamelin was known for his ability to play hypnotic music and charm certain animals. So, in 1264, the villagers asked him to play his pipe and get rid of all the rats plaguing the area. They promised him a hefty fee for his troubles. Of course, the piper agreed and played his pipe. Soon all the rats followed him to their death.

He went back to the villagers who reneged on the deal. Angry and bitter at them, he went out once again to play his pipe. But, this time, it was the children that fell entranced to his hypnotic tune. They followed the piper and were never seen again.

Most famous fairy tales have a happy ending. The real-life stories behind some of these show that the truth is far from happy ever after.