If you asked most people if they are freethinkers, the vast majority would automatically give a ‘yes’ response. Most people are lying to themselves, are you?

Most people hold fixed beliefs about life in one way or another, and those beliefs are largely based on what they’ve been taught by the society they live in, the family they come from, or even just what makes them feel comfortable and at peace with themselves.

Freethinkers don’t ascribe to beliefs just because those beliefs make them feel better about themselves and life in general. They are dedicated to discovering the truth, no matter how uncomfortable that may be.

Dedicate your life to truth

Here are 8 things that freethinkers do differently:

1. They think for themselves

Freethinkers don’t simply accept things as true because they’ve been told that certain things are a certain way. They combat accepted beliefs, common notions, and things that they’ve been taught using reason.

Also, they battle against the emotions that cause them to believe things that can’t be verified by reason, despite the appeal of succumbing to them.

Freethinkers face the truth as they discover it, about themselves and about life, even if it makes them feel frightened or uncomfortable. The most difficult truths to accept are those which make us feel like we’ve been doing something wrong in life and that we should change in some way.

Most people are unwilling to accept painful truths and their egos will play all sorts of tricks on them to prevent them from doing so.

3. They search for evidence

Freethinkers hold evidence above hearsay and what makes them feel good. They research any claims that are made and accept them only when there is sufficient evidence to justify their doing so.

They don’t parrot opinions of other people just because they sound persuasive or appeal to them, and they never express opinions that can’t be supported by adequate evidence. If new evidence comes to light that goes against what they previously thought to be true, they change their minds accordingly.

4. They’re true to themselves

Freethinkers don’t betray their way of thinking about things because they want to impress or get in with people who hold certain beliefs. They aren’t afraid of being rejected by people who don’t care for the truth. Thus, they behave in a way that is in line with their convictions.

5. They never get complacent

Most habit is rotten and suffocating: it represses all spontaneity. The only way to achieve excellence is in the struggle to open up new land; only in the process of traversing great mountains can we hope to find true power in becoming.

Freethinkers realize that new information can transform their perception. They never get so attached to a belief that they can’t change it. They carve out new paths and are at the forefront of change.

Freethinkers follow Kierkegaard’s famous maxim: ‘de omnibus dubitandum est’ – everything must be doubted. They doubt even their own perception of themselves and the world.

Love of truth and the necessity of being honest with oneself requires this from the freethinker. He knows how easy it is to fool himself, to view himself and his convictions in a favourable light.

7. They take the risk of being alienated

Freethinkers understand that devotion to the truth might mean that they frequently swim against the stream in human relationships. Only when a person starts trying to speak the truth do they find out how unpalatable it is to people and how badly they can react to it.

Life is very difficult and people cling on to illusions to help them get through. Robbing people of these can cost them their popularity. 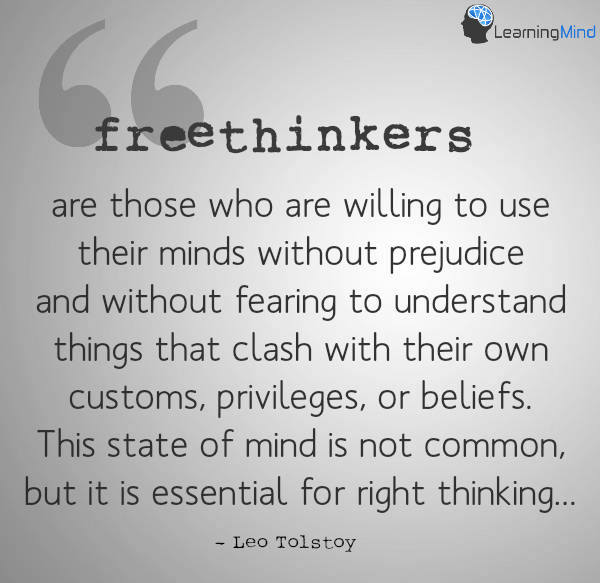 Freethinkers are those who are willing to use their minds without prejudice and without fearing to understand things that clash with their own customs, privileges, or beliefs. This state of mind is not common, but it is essential for right thinking…
― Leo Tolstoy

Freethinkers are able to look at themselves and their actions in an objective light. They understand when they behave in a way that is contrary to reason and their ethical code, and they try to remain conscious of their words and actions at all times.

Freethinkers are a tiny minority in human society and always have been. That’s why the few instances of true freethinkers have stood out in history.

It’s difficult and often dangerous to be a freethinker. Many freethinkers have lost their lives by staying faithful to the truth. Just think about the Greek philosopher Socrates, who was put on trial by his native Athenian democracy for corrupting the youth of Athens and impiety against the gods.

Since then, being a freethinker hasn’t gotten any easier, and it will likely not become any more so in the future.

Would you describe yourself as a freethinker? Do you identify with the points made?

Caroline Hindle, M.A.
Contributing writer at Learning Mind
Caroline Hindle is a UK-based professional writer, editor, and translator who holds an M.A. in Ancient World Studies from the University of Manchester and has earned the Senior Johnson Prize for Best Finalist in Classical Subjects.