Getting older is something which terrifies almost everybody, except, it seems, those who have actually experienced it.

Here are some things to remember to help you get over your fear of getting older.

1. As you get older, you become less anxious and more relaxed.

One thing I’ve noticed in my own parents, is that now they are in their 60s, they seem happier than ever both as individuals, and as a couple.

I also notice that my best friend’s mother and her sister, who are both in their 60s, seem to be enjoying a second adolescence. They’re out and about having fun more than me or my friend, and, also, incidentally, seem to spend a lot less time fretting over getting older than we do.

I wondered if this was something that we could observe more generally in people of such an age, and what might be the cause of it.

On the day of writing this piece, singer-songwriter Leonard Cohen’s death at 82 years of age was announced. I watched a wonderful collage of the legendary artist in interview. One quote stood out particularly. He said:

“I read in the International Herald Tribune that, as you grow older, the brain cells connected with anxiety begin to die. You start feeling a lot better. It has nothing to do with virtue or meditation, or any kind of spiritual achievement. You just start feeling better.”

On further investigation of this claim, it turns out that he was right. Neurological changes do indeed occur in the locus coeruleus, an area of the brain connected with fear and anxiety. Between the ages of 40 and 60, this area begins to deteriorate sharply. This gives rise to what Steeve Roose, a psychiatrist at New York State Psychiatric Institute, described as greater self-assurance and a softening of emotions such as anger and worry.

As most of our experiences of mental suffering are dictated largely by what is going on inside our brains, rather than by an objective perception of reality. This fact alone should be enough to comfort those of you who fear you won’t be able to cope with the ageing process.

Another thing I’ve noticed, observing older people I know, is that they seem to undergo a transformation wherein they find a new lease of life by pursuing some new interest or hobby.

My own mother discovered art in her 60s, never having picked up a paintbrush in her life before. She’s now thoroughly art-mad and is even studying a degree in it. She spends all her time in the studio, has a whole bunch of new friends who share her interests, and is frankly more joyful and enthusiastic than I’ve ever known her before.

Having many wonderful friends of over 60 on Facebook, I notice the same thing! They all seem so busy and engrossed in what they’re doing.

I think the key is perhaps that they lose focus on themselves. Their focus seems to shift outwards, with no ego attachments to what they’re doing – they just take pure pleasure in their hobbies and pastimes for the sake of the pastime itself. This pleasure in work for the work’s sake is surely something to be envied, not feared.

I suppose what many people, particularly women, fear most about getting older is the idea that they’ll no longer have a shot at romance.

This seems to be a complete misconception from what I see of the over-sixties around me. My parents, to use an example of a married couple, spend more time than ever together and, indeed, take more pleasure in being together than ever before.

But it’s not just that – my friend’s mother, widowed some time ago, started going out with a man younger than I am, and who is thoroughly devoted to her. Having gotten married and had children young, all the romance that was absent from her life so many years has found her now.

On top of this, she has no stress or anxiety about where this relationship is headed, she’s just enjoying the moments thoroughly, and it’s a beautiful sight to behold. This is not to mention all the single men of her own age who constantly flirt with her!

No group of people seems to have benefited more from the emergence of social networking via the internet than the over-sixties. On a social network, we’re able to share our thoughts, feelings, and interests with people we don’t know. Consequently, older people, being less interested in the superficial things that concern younger people, are much more likely to find a kindred spirit nowadays than ever before.

Indeed, with their wonderful relaxed and open attitude to socializing online, they seem far more likely to find a soulmate than their younger counterparts! 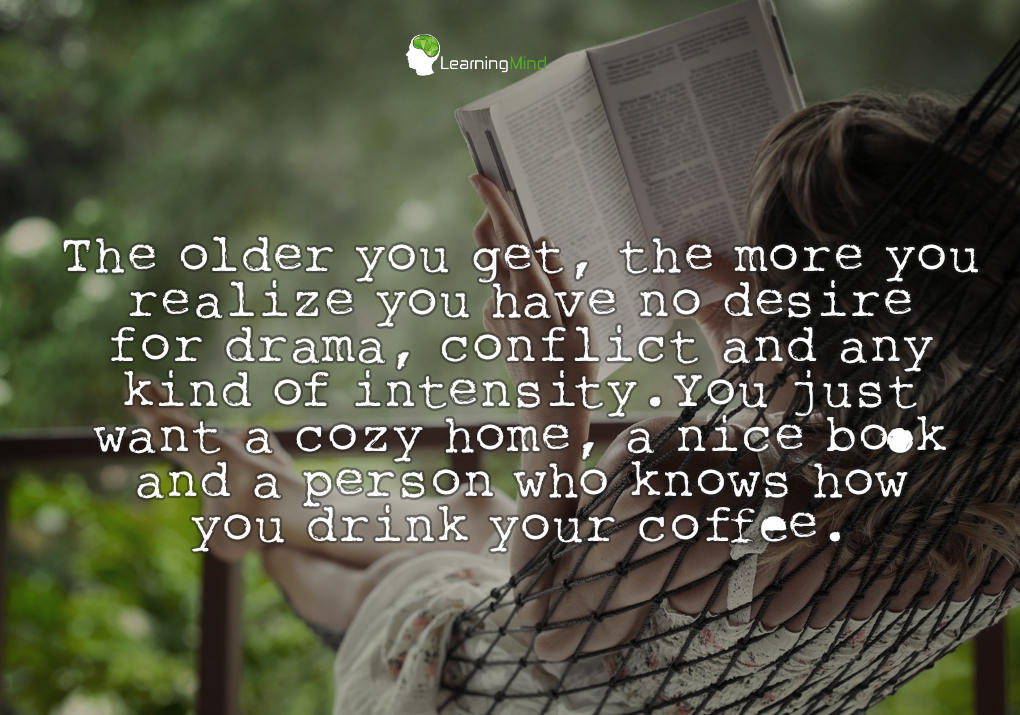 There is so much more I could say on this topic, but I simply haven’t got the space. I hope, at any rate, that considering some of these beautiful aspects of getting older has helped comfort those of you who fear the passage of time.

What other reasons can you think of not to be anxious about getting older? Share them and help others get over this irrational fear.

Caroline Hindle, M.A.
Contributing writer at Learning Mind
Caroline Hindle is a UK-based professional writer, editor, and translator who holds an M.A. in Ancient World Studies from the University of Manchester and has earned the Senior Johnson Prize for Best Finalist in Classical Subjects.