The assumption that people in ancient times may have had contacts with alien visitors seems to have found another evidence.

Indian researchers discovered petroglyphs (images carved on rocks) which seem to depict humanoids with obscure faces and an object that looks like a spaceship.

They are estimated to be about 10,000 years old. The archaeological finding was discovered in the caves located in the neighborhood of villages Chandeli and Gotitola in India.

Paleocontact or the ancient astronaut hypothesis is a theory according to which intelligent beings of extraterrestrial origin could have visited Earth in ancient times.

According to archeologist JR Bhagat who took part in the research, the discovery of the rock carvings depicting aliens could be a confirmation of this theory.

The rock paintings, notes Bhagat, show that in the distant past people have suspected the existence of space aliens, and maybe have even seen them.

“The findings suggest that humans in prehistoric times may have seen or imagined beings from other planets which still create curiosity among people and researchers,” Bhagat told The Times of India.

At the same time, the images have a striking similarity with aliens shown in sci-fi movies.

“The paintings are done in natural colors that have hardly faded despite the years. The strangely carved figures are seen holding weapon-like objects and do not have clear features. In a few pictures, they are even shown wearing space suits. We can’t refute the possibility of imagination by prehistoric men but humans usually fancy such things,” said the archaeologist. 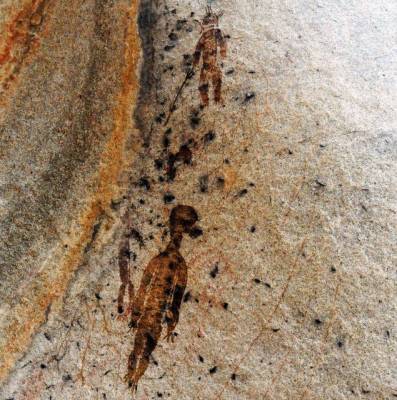 It is interesting that the inhabitants of the villages of Chandeli and Gotitola, near which the possible evidence of the contact of ancient humans with extraterrestrial beings was found, have a legend about small-sized people who came down from heaven, took away some of the inhabitants of these villages and never returned them back.

Currently, the Indian experts are planning to contact NASA for further study of the finding.