In the 60s a psychiatrist from Denver claimed that he could capture the human thoughts on film. He conducted a series of experiments using a Polaroid camera. The results of his work are known as thoughtography. Let’s try to find out whether thoughtography is real or a hoax.

Eisenbud and Serios: Did they really capture human thoughts on film?

Dr. Jule Eisenbud and his subject Ted Serios tried to prove that psychic projection is able to appear on the film.

All experimental photographs are stored in the Special Collections of the University of Maryland today. Recently, they have been digitized, and now everyone can download the results of the experiment and decide for themselves whether to believe in thoughtography or not.

Curator and organizer of an exhibition of photographs in 2011 at the University of Maryland Emily Hauver said that these pictures are kind of ghost photos of the 19th century when the ghosts appeared in the picture thanks to multiple exposures or layering images over the main photo.

Using photography as an intermediary between our world and the beyond has a long history. The case of Ted Serios is unique because a Polaroid camera was used, which means that all the photos were created instantly, eliminating the possibility of cheating by using technology to print photos in a darkened room.

Ted Serios and Dr. Eisenbud worked on the experiment of capturing human thoughts on film for three years. Holding a small piece of paper folded into a tube in front of the camera, Serios directed the camera lens to his forehead. Exposure was made on his signal – a verbal command or snap of the fingers.

The first pictures allegedly depict a distant object or place. 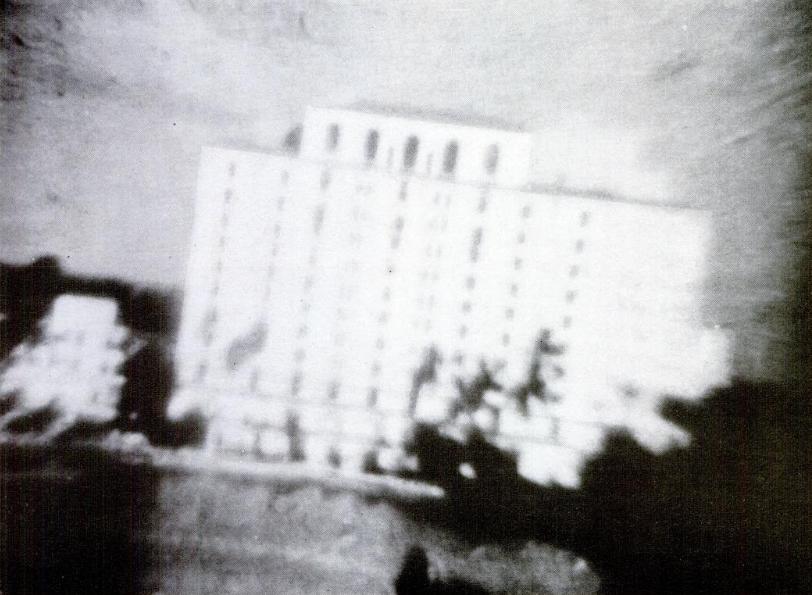 The second group of pictures, so-called “normals“, depicts what anyone expects to see in the photo – Ted’s face and shoulders, as well as some of the furniture behind him. All other photos by coincidence were completely black or completely white.

Ted claimed that during the shooting, he did not see any images in his head. However, it was more akin to a portal through which this information or images passed.

Subsequently, all the results are reflected in Eisenbud’s book The World of Ted Serios: “thoughtographic” studies of an extraordinary mind.

It was received with interest but at the same time gave rise to a large number of skeptics who did not share the psychiatrist’s views on thoughtography, despite the fact that Eisenbud made considerable efforts to account for variables that may indicate fraud.

Besides the fact that these pictures are of great interest to parapsychology, their role in the history of art and the unconscious is also clearly remarkable.

Thus, one of the approaches was to try to create an image by penetrating into the subconscious. Ted worked in the same vein: he claimed that the images arose from his subconscious or at least passed through it.

Supernatural or not, these pictures with their strange obscure images that appear as figures in the mist, still have something hypnotic.

Besides the paranormal pictures and the “normals”, there is a 16 mm film with the experimental session in the archives of the University. As Emily Hauver said,

“If you do not believe in the paranormal, these and other materials rather convincingly argue that Ted was not engaged in a hoax and that his work is commendable.”

Criticisms: is thoughtography a hoax?

Magicians and photographers Charlie Reynolds and David Eisendrath gave an interview to the magazine Popular Photography in October 1967. They said they had spent a weekend with Serios and Eisenbud, which was enough to confirm that their claims were fraudulent.

According to them, they noticed how Serios slipped something into the tube that he had with him all the time. Eisendrath and Reynolds assumed that this could be a depiction of the object that would then be taken by the Polaroid.

Professor of physiology W. A. H. Rushton studied the photographs one year later and concluded that they resulted from the light coming from a luminous object that contained a picture and was placed in front of the Polaroid lens. Moreover, he attempted to produce a similar effect by placing a tiny picture in a prism against the camera lens and succeeded.

So, it seems that after all, the photographs of Serios and Eisenbud didn’t actually capture human thoughts but were likely a product of skillful manipulation.