People have been trying to cut down on their transit time to go from one place to another to the least possible since the beginning of time.

If it was at all possible to take less than a second to go to the other side of the Earth, people would be abuzz and ecstatic. They would be able to visit their son or daughter studying in a University 5,000 miles away from home, the same way they would visit a neighbor! And probably crash in a couple of parties…

At first people used horses, then came the cars, the airplanes, the ships… in an ever increasing need for gaping the distances and be able to commute anywhere the soonest possible. But it still takes forever. Especially when you have not seen a loved one for some time, or if you received bad news about hospitalization and you want to be there yesterday, if possible.

Based on that concept, scientists have been experimenting on teleportation for ages without any successes (unless they keep such a discovery a tightly sealed military secret).

The theoretical platform was provided by none other than Albert Einstein and his space-time dimension, stipulated in the theory of general relativity. Along with his colleague Nathan Rosen they formed the theoretical model of the Einstein-Rosen Bridge, otherwise known as a wormhole, as a hypothetical shortcut through space and time.

To put it as simply as possible, this bridge is supposed to act as a tunnel with one end here and now, and the other end somewhere else in both space and time.

Theoretically, the other end could be in a different country, planet, galaxy, even a universe and in the present, the past or the future. Still, this does not clarify how this can be done in no time, as, ok, we managed to establish a connection with somewhere and sometime. To go there, we still would have to cross the tunnel.

The answer lies in uniting two theories in one.

First, we take the equations as stated by the Einstein-Rosen Bridge for a traversable wormhole metric, and then we apply the Space-time Folding theory which stipulates that space can be folded like a sheet, bringing too seemingly far apart places to almost coexistence in the same point.

This principle is put in effect in Marc G. Millis’s hypothetical Space Drive. The combination provides just what we needed. Instant transportation (or almost instant) between two points no matter how far apart.

Let’s try to explain the sequence of events in a more comprehensible way.

Space is not a level ground as many believe. Imagine of it as an elliptical surface, similar to a planet.

Suppose that you are located in Point A on Earth and you wanted to go to point B. 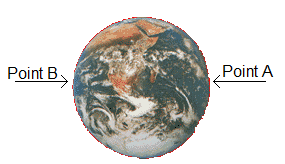 You would have to travel around the surface of the earth, probably combining a trip on an airplane, and car drives, first to go to the closest airport to point A, and then to go from the closer airport to point B, to your destination. Total transit time, including the waiting at the airports for check-in procedures and take-off, about 16 hours. 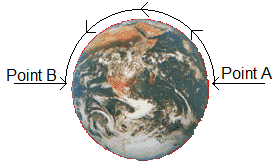 If it was possible to put the Einstein – Rosen Bridge in effect and create a wormhole, you would only need to travel directly from point A to point B. 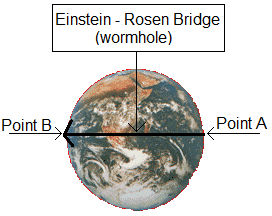 Even if it was possible to open the tunnel, it would be unfeasible anyway, because you would have to go through the mantle and the core of the earth, and suffer all the side-effects of such a trip through radiation and extreme heat.

You’d think that it would be worth it, to devise of protective measures for the human body and use a rocket flying at Mach 5 (5 times the speed of sound) to make the trip. Transit time under the new parameters: maybe an hour.

Already a major improvement, isn’t it? Unfortunately, it is too costly. To rent the protective gear and to pay for the ticket on the rocket, would probably cost you two arms, two legs and a part of the torso. But what if it was at all possible to implement Marc Millis’s theory?

This theory would bring Point A almost on top of Point B. The two points cannot be exactly one on top of the other as the same mass cannot occupy the same space through different points (a concept to explain in a future article). 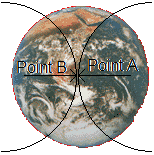 How is that possible? Marc Millis says that by warping the variables of space-time, it is possible to fold space by a – rather complicated to explain simply – application of multidimensional physics and come up with a real-time point to point Einstein-Rosen tunnel.

It would be like opening your apartment door to go out and finding yourself immediately knocking at the doorbell of the place you want to visit. Total transit time: a few seconds.

Cost implicated: Em… Let’s not engage in such trivial matters, shall we? Let’s just dream of the possibility to visit someone in just a few seconds….