If I asked you how a CD worked, how confident would you feel in explaining it to me? Let’s say from 1-10? A 7, 8 perhaps? Okay, go on then, explain it, but in so much detail that I completely understand. Not so confident now? We’re talking about a phenomenon called known unknowns and unknown unknowns.

Don’t worry, it sounds complicated and a bit confusing, but it really isn’t. It’s all about ignorance and how we perceive our knowledge to be of something.

You probably feel quite confident in your ability to answer the first four but pass on the last two. In fact, studies show that we are actually quite ignorant when it comes to everyday things.

We are quite happy to admit we are not rocket scientists or that we couldn’t perform brain surgery, but the simple things in life? We like to think we know everything we need to know.

Known unknowns are the things we know we don’t know about, if that makes sense. Like space travel, brain surgery, how self-driving cars work. We know we need to research these topics to learn more about them. But the important thing is we also know that we’re not really expected to know about things as complicated as rocket science.

Now, unknown unknowns are the things we think we should know about, but we actually don’t. Like, how a bicycle works or what makes a toilet flush.

These are the simple, everyday things in life we take for granted and assume we know how they function. But we don’t. But we don’t know we don’t. The important thing with unknown unknowns is that we think we are expected to know about them.

Why do we sometimes wildly overestimate our intelligence?

“Most people feel they understand the world with far greater detail, coherence, and depth than they really do.” Leonid Rozenblit and Frank Keil (2002)

In the first phase, they asked participants to rate how well they understood the workings of objects such as sewing machines, mobile phones or bicycles.

In the second phase, they were asked to explain in a detailed report of how each object worked. They then re-rated their understanding of how each one worked. The results showed again and again that their confidence in understanding the workings of an object fell drastically from phase one to two.

In another study, Rebecca Lawson asked participants to draw a bicycle in her Science of Cycology report. Some of the results are featured below: 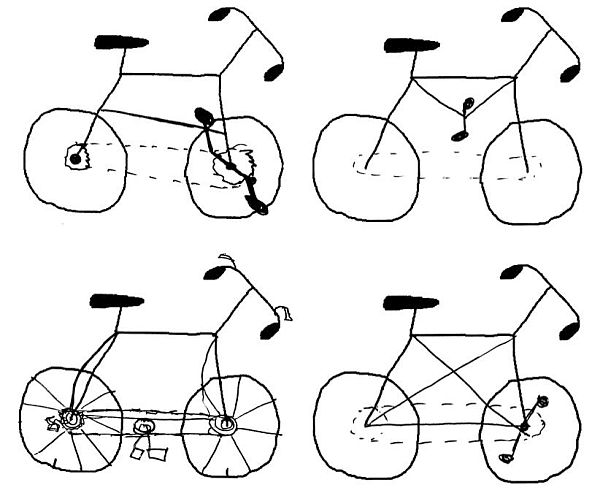 In fact, it doesn’t matter whether we are talking about the workings of objects or scientific theories or the stock market. IOED is this pervasive feeling we know more than we do.

Why do we accept that some things are beyond our knowledge whilst others are not?

We don’t need to know how things work

The main reason for the ignorance of our own ignorance is that we don’t need to know how everyday things work. They just do. Generations that came before us invented them and they have been in our lives for decades.

We are used to seeing them wherever we go. They are part and parcel of the fabric of life. Thanks to others, we haven’t had to invent them; we just use them. So there’s no need for us to know the ins and outs of the workings of a toaster or a bicycle.

I liken it a little to spellcheck. Sure, we could learn every difficult word there is in the world by heart, but why bother? Our computers have spellcheck, so we don’t need to make the effort to learn. But we wouldn’t call ourselves stupid because of this.

It’s the same with gadgets, theories or mechanics.

Now, more than ever, thanks to search engines and sharing information, we can find out a lot more than our predecessors. We can look things up on Google, share content but more importantly, build on what our previous generations have already made.

And we don’t need to know how things work to be able to do this.

Sharing knowledge makes us think we are smart

The other thing about our generation compared to previous ones is that by sharing information, we give ourselves the illusion of knowledge.

If I asked you why the planets are round, or what causes gravity, you wouldn’t throw your hands up in the air with despair. You’d look it up and tell me the answer.

It’s this instant access to knowledge that gives us all expert status when we are not experts. But the lines are blurred. And we certainly don’t consider ourselves to be stupid when we can research the answer.

But it’s not just this kind of instant access to information that gives us IOED, it’s the way we consume this knowledge.

We skim the top of news items, we click on salacious headlines for the juicy parts of a story, and we allow tweets to inform us of global political moves. We tap into viral videos, we listen to soundbites and agree with memes.

This is a superficial way of ingesting knowledge. We never really deep dive into a topic. As a result, we know a lot of stuff, but not in that much detail. In other words, we know a little bit about a lot.

Why the Illusion of Explanatory Depth Is Dangerous

When we believe we know more than we actually do, it can lead us to prejudice without us even knowing.

One study tackled how understanding people and IOED could help reduce political extremism. In 2013, Philip Fernbach et al asked participants to rate how well they understood a range of policies such as:

Participants were then asked to explain in detail how each one worked. Afterwards, they had to re-rate their knowledge on the subjects. As expected, their confidence fell after they were asked to fully describe the policies.

This study is an example of how IOED could be used to encourage a more moderate approach to political extremism.

I always use this example to show how people always think they are right, if for no other reason than it makes you think about the other side. Amaryllis Fox was a former undercover officer for the CIA and has met a lot of opposing factions in her time.

“If I’ve learned one lesson from my time with the CIA, it is this: Everybody believes they are the good guy,” CIA Officer Fox

We can’t possibly know everything and we can’t always be right. Understanding that we are all susceptible to IOED could lead to a more empathetic world for all of us.