Flying houses and buildings, colorful gardens, trees and cottages are skillfully combined in unique paintings that captivate the viewers and reveal the artist’s vivid imagination.

Jacek Yerka was born in Torun, a city in Northern Poland, in 1952. Both his parents studied Fine Arts, which gave him the incentive to start creating art, too.

Being an introvert child, he immersed into his own world of drawing and sculpture, creating paintings and small sculptures (boats, heads, figures, and fantastic masks). In primary school, Yerka used to create sculptures during lessons, as a way of “escaping from the grey, sometimes horrifying reality” as he has stated.

Yerka was initially thinking of following studies in astronomy or medicine. A year before his final exams, he decided to be a painter and practiced in every modern current in painting, from impressionism to abstract.

He was inspired by the works of Cezanne and the water paints of Paul Klee, but he was mostly interested in the Dutch tablet paintings of the 15th century. Yerka created dreamy visions in copperplate techniques, similar to the style of painter and printmaker Albrecht Dürer.

“I did my first painting of my life a year before going to college, where I began studying graphics. My instructors always tried to get me to paint in the more contemporary abstract style, and move away from my fascination with realism. I saw this as an attempt to stifle my own creative style and steadfastly refused to fall in line. Eventually, my teachers relented.”

On the second year of his studies, Yerka accidentally discovered poster making.

Jacek Yerka has been working as an individual artist since 1980. His posters were promoted in national and international exhibitions. He concentrated on poster making until 1980 when he decided to focus on painting. In 1996, he started doing pastels.

Yerka cooperated with various galleries in Warsaw and other cities. In the mid-1990s, he participated in a Hollywood production designing figures, monster machines and unreal landscapes such as “Creation of life”, “Technobeach” and “Broken picnic”.

This talented artist believes in nature’s determining force over human existence. His creative concepts reveal the special link between nature and humankind. His bright, colorful images with lush details, have an overwhelming impact on any viewer.

Imaginary landscapes, creatures with mechanical parts, colossal beasts, cliffs or empty stretches of land are the main themes of his artworks. The 4siders, his “specials of specials”, depict four worlds in one frame in a unique way. 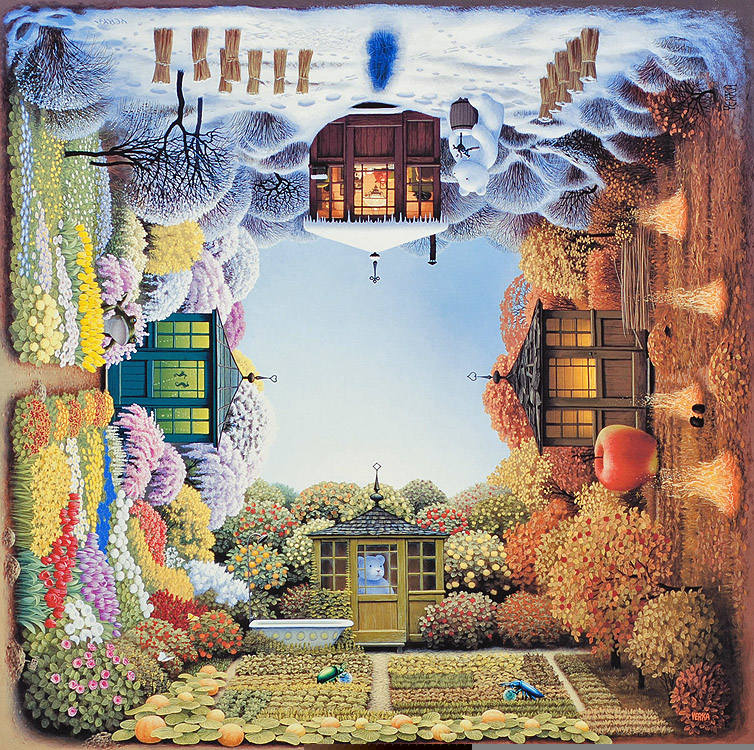 He has always been inspired by his childhood feelings and fragrances, his dreams as well as the Polish countryside, where we got inspiration for his series of “rustical” themes, such as “Amok harvest”, “Space barn”, “Express package”, “Jalousie”, and “Full bowl”.

“For me, the 1950’s were a kind of Golden Age. These were the happy years of my childhood, filled with wonder at the world around me. It is reflected throughout my work in buildings, furniture, and various pre-war knickknacks. If I were, for instance, to paint a computer, it would definitely have a pre-war aesthetic to it.” 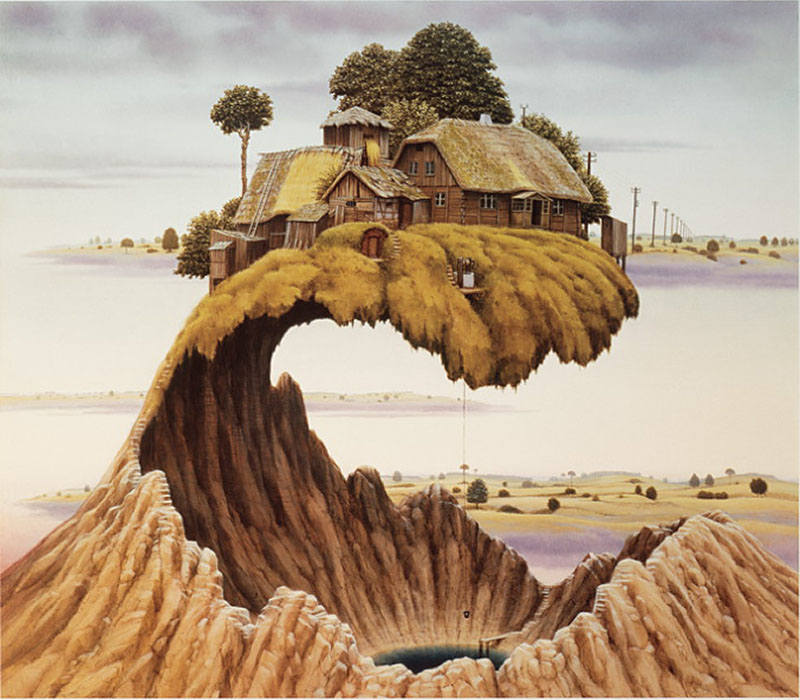 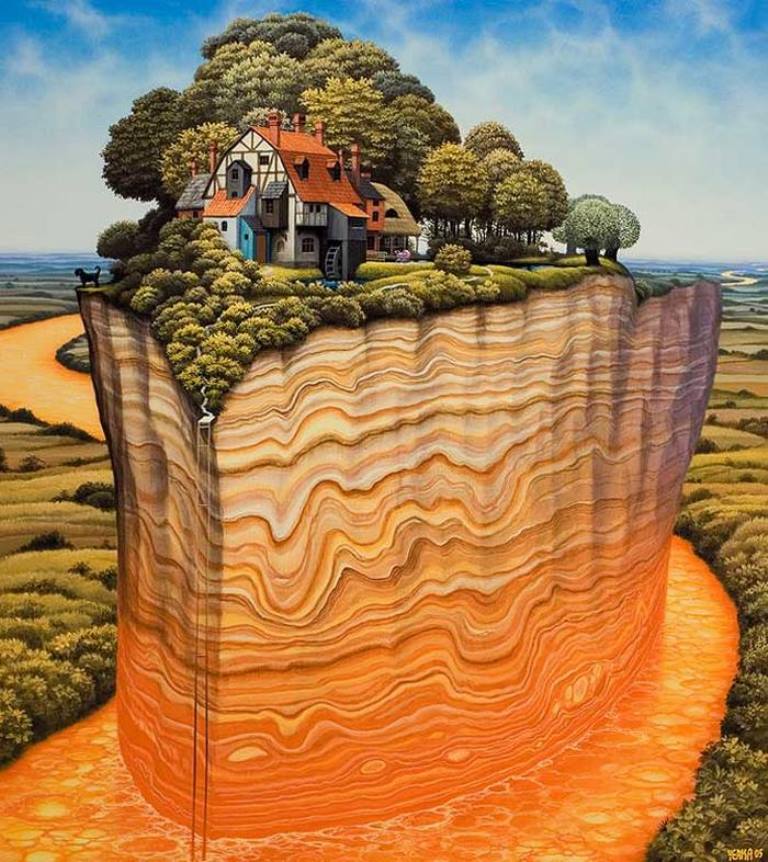 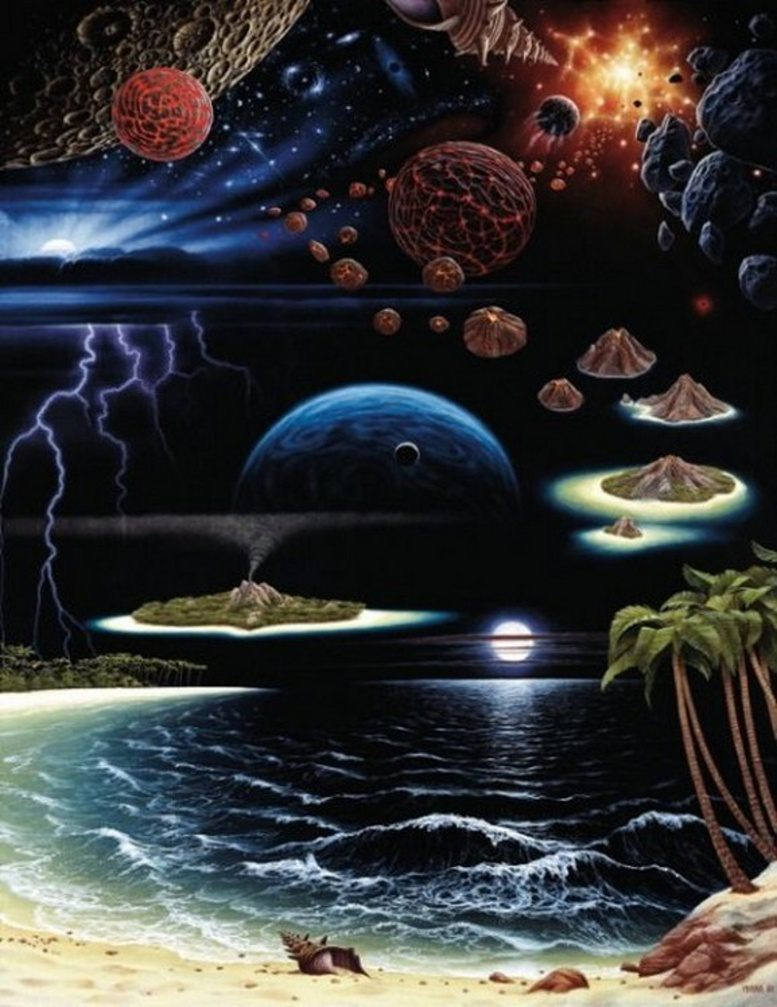 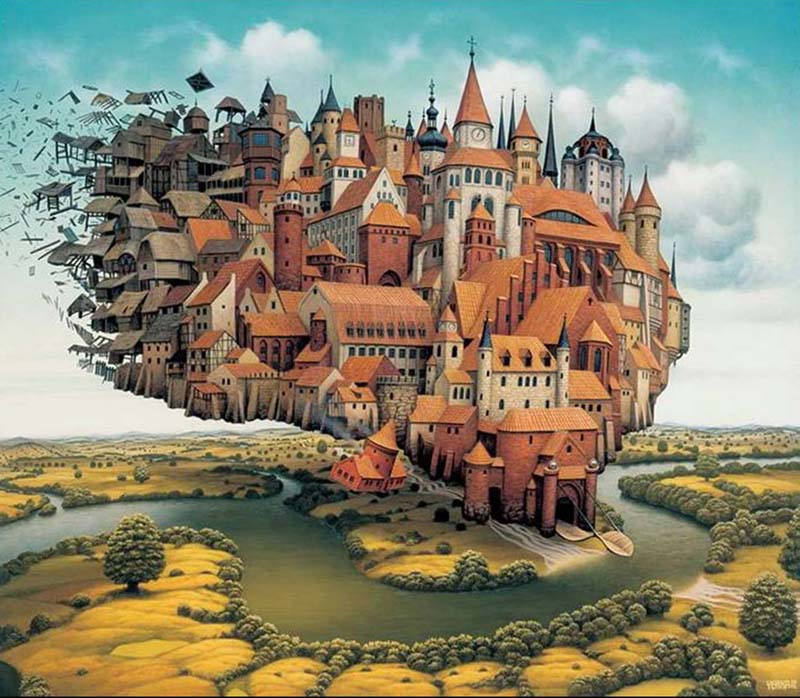 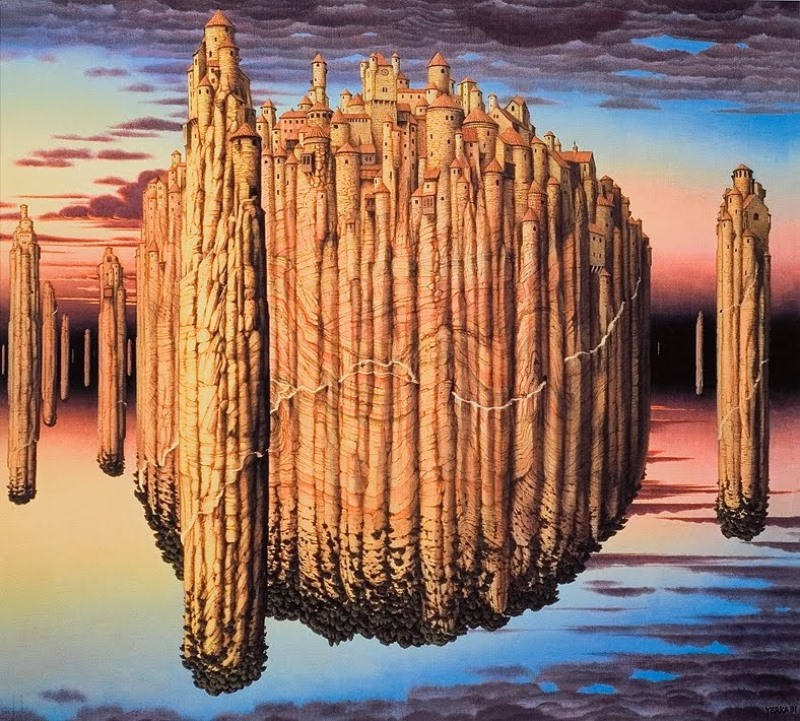 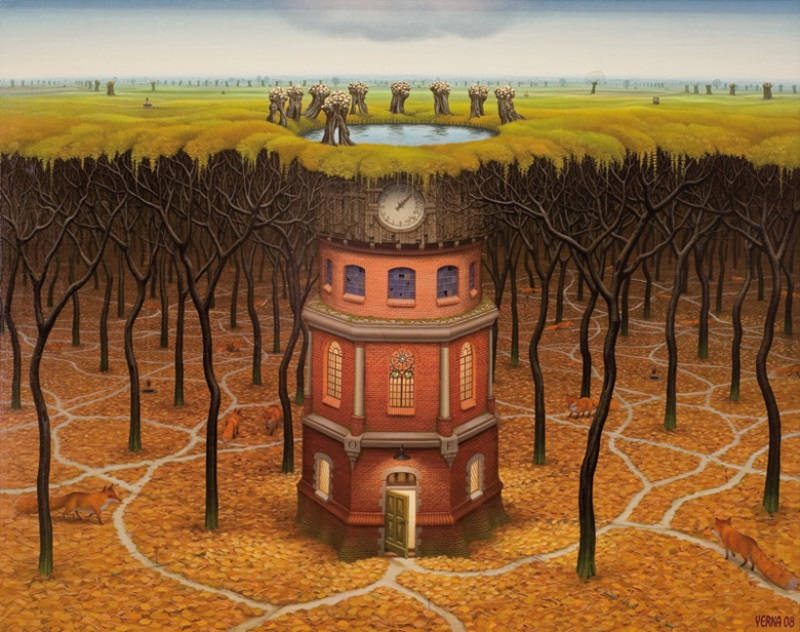 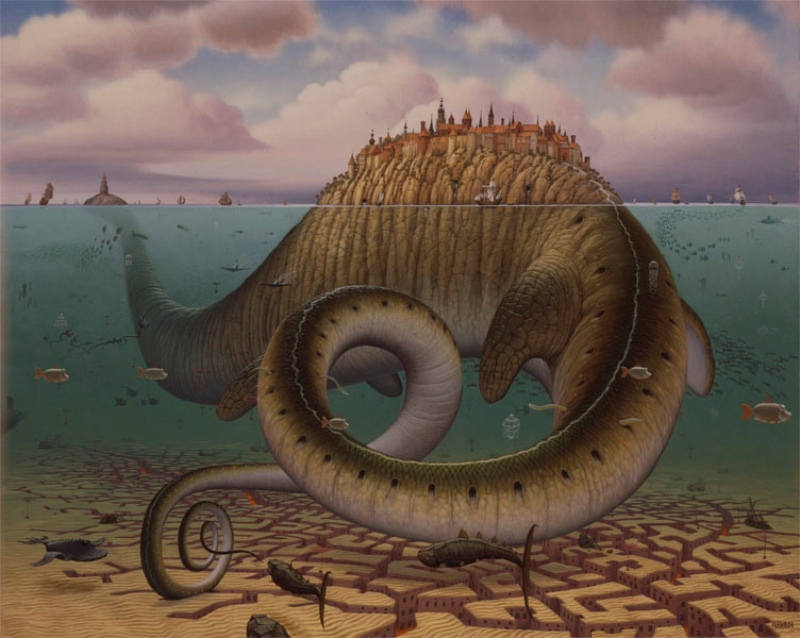 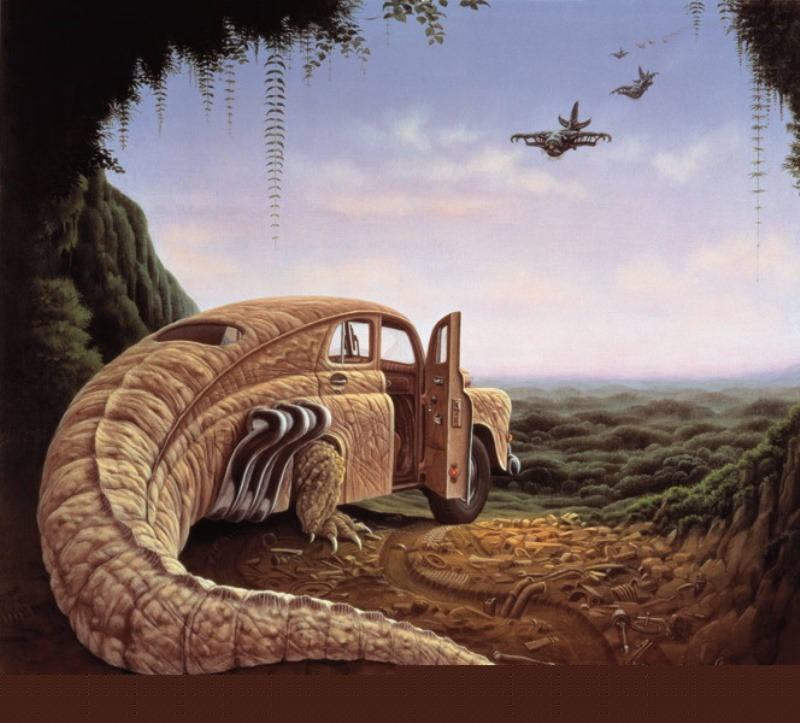 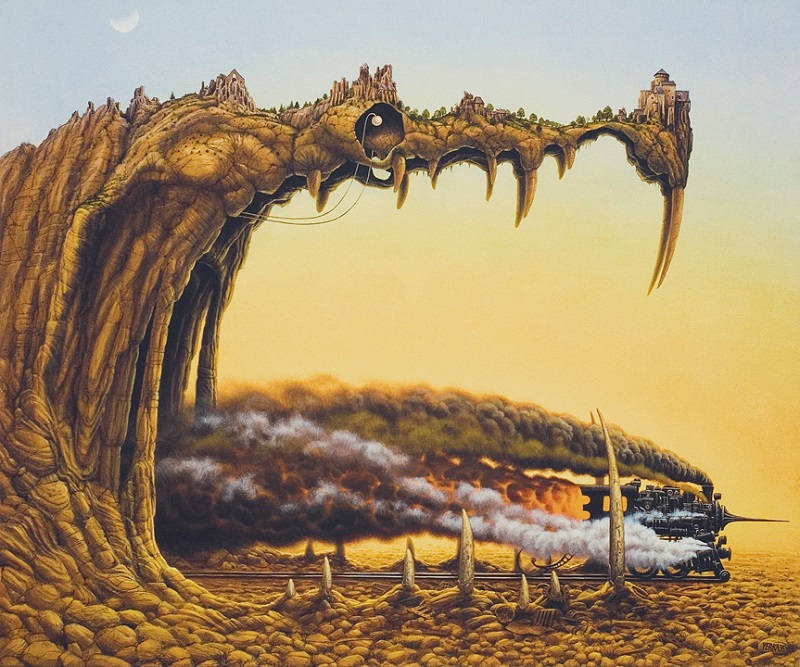 Check out Jacek Yerka’s website to see more of his work.