The way we see and the way we think about things can be changed due to mind illusions. You will question what you’re experiencing. The way magic tricks work reveals many interesting things about our perception.

As a child, I loved to watch magic tricks. I was astounded by objects disappearing and reappearing right before my eyes. To me, these people were wizards, capable of manifesting most anything they wanted. I think one of my favorite magic tricks was the card trick where the selection you picked was also picked by the magician a bit later. This is a well-known mind illusion experienced by millions of people.

As a child, however, I thought it was amazing. I also loved having money pulled from behind my ears as well. When I was alone, I would keep pulling at my ears hoping I could shake out enough money for a soda. Magic was just this real to me.

How do mind illusions and magic tricks work?

As I grew older, other people cheapened magic for me. They revealed the truth of how it worked and destroyed my excitement over magic illusions and tricks. However, little did I know, magic was more than just cheap tricks and sleight of hand. I wouldn’t learn this until I was much older.

Magic is sleight of the hand. This part is true, to a certain extent. But it’s more than quick movements and crafty magicians who’ve studied how to fool people over decades of their lives. The truth is, the things you see aren’t really there and the things you do not see, are the things you missed with your own eyes, eyes which are imperfect and cannot see everything. Sorry, I guess that sounded about as clear as mud.

But it goes deeper than that. Magic happens due to cognitive imperfection, and how the brain works. Magic and illusions of the mind are actually products of human misdirection in the brain. Our perception is flawed. Can you believe that?

For instance, if you and a friend each had a different flavored drink, and your friend switched them, as you took a swallow of the closest drink, you would probably have a strange reaction. You might even choke. Why is this?

It’s because what you were expecting did not happen. The taste was different, and your brain automatically rejected a false representation of what it was receiving. In this case, your brain was quick to recognize the difference, but in some cases, it’s a bit slow, especially visually.

Here’s the interesting part. Your friend’s drink may have been just as delicious as your own. In fact, maybe the last time you purchased a drink it was your friend’s flavor. But since you didn’t expect that flavor, your brain said, “Yuck!” If your friend had offered a sip of his drink, it would have tasted just fine.

Perception and its flaws

When you look out your front door, you think you’re seeing everything in your range of view, right? Well, that’s wrong. There are many things you aren’t seeing and they are right in front of you. It’s your mind indulging in illusions.

That’s because memory is flawed and perception has holes in it. There are many things in that same environment that you never notice due to distraction. If you’re distracted enough, something could walk right past your vision and you would never see it.

Throwing balls into the air 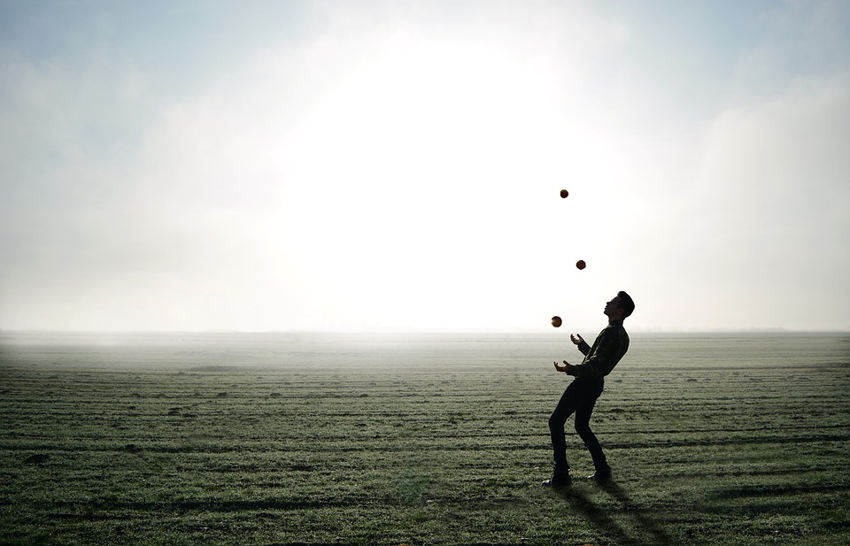 If a magician were to throw balls into the air and catch them, you would see that clearly. After a while, one of those balls might not come back down. Why is this? It’s magic, right? Well, it’s more like mind illusions created by distraction. There’s that word “distraction” again.

Here’s the truth of that, and magicians everywhere reading this are hating me, the balls in the air always come back down. It’s just that sometimes the illusionist never throws a ball, and yet he and the rest of the audience looks up anyway. Why?

You have been conditioned by the other balls to look up and watch them descend back down. After so many throws, the magician could gesture, look up and never throw a ball. But did you know, that audience would swear they saw that ball go up and never back down. Here’s where we see those holes and flaws in our perception, and we see the power of distraction on our minds.

The different regions of our mind also have different jobs as well. Take spoon-bending or the “rubber pencil” as another example. Have you ever wondered how illusionists can bend metal with their minds? The truth is, they probably can’t do that at all. The magic trick of moving the spoon up and down at a particular rate can be revealed with neuroscience.

As the spoon moves, the different parts of that spoon move in different directions according to how the neurons process the moments in the mind. This is one of the best examples of the mind creating illusions.

What are magicians really doing?

Unfortunately, I’m going to have to tell you that those little magic tricks aren’t supernatural. I know that hurts and when I realized it as a child, it hurt me too. But of course, you probably already know that, who am I kidding. However, the magician is still an amazing individual and understands how to fool us by using our cognitive imperfections.

The truth is, most of these magicians and mind illusionists haven’t studied about human perception, memory, and sensory tricks in order to perform. They simply have learned what works and how to distract their audiences.

Some magicians, however, do understand how it works and can take illusions to the next level. The next time you watch a magician perform mind-bending illusions, just remember why it’s working. Try to catch those tricks now that you understand your imperfections.