Music therapy, or sound therapy, is the therapeutic practice of applying specific sound frequencies to the mind or body of a sick person. Is there any basis behind it?

I recently met someone who has made a life out of selling instruments, teaching music theory, and practicing a method of healing through music. A lot of how music helps is in sharpening a person’s mind and coordination, which is an important part of music therapy.

Studies and practices have shown positive results in various fields of healing, including depression and autism. It is believed that this is partially due to the vibrations of the notes and the order in which they’re played.

Another aspect that has been explored is regarding how the progression of notes in a scale ‘sound’ good to us; an instrument played in key along with another instrument sounds good. The study of music therapy has brought up the question: Why?

How does it work?

Sound healing is not complicated at all. It can be transmitted to someone from many different sources – their own voice, another person’s voice, from listening to songs or an instrument or even from a pet.

In fact, research has shown that when a cat purrs within a range of 20-140 Hertz, nearby humans greatly benefit from these vibrations. Purring has been linked to lowering stress, decreasing symptoms of dyspnoea, lowering the chances of having a heart attack, and even strengthening bones.

The quality and type of sound are also very important. Several scientific studies have been conducted on the potential healing benefits, and in many places, they are now being practiced with great success.

There is a machine called a Lithotripter that is widely used in modern medicine. It uses sound waves to break up kidney and gallstones. The machine attacks the stones with a specific sound frequency for one to two hours.

The patient is admitted in the morning and discharged in the evening, and generally, no anesthetic is needed. The destroyed stones are passed out of the body through the urine, and with most patients, only one treatment is sufficient to successfully break the stones down.

A two-year study conducted by the Klaus Tschira Foundation in Germany showed that using music therapy dramatically reduces the symptoms of chronic tinnitus.

The patients reported a significant decrease in their symptoms, and MRI scans of their brains showed that the sound therapy activated certain areas of the brain that researchers believed were responsible for the symptoms that come with tinnitus.

Sharpening the Mind and Coordination

Practicing an instrument helps you to get better at it. This is, in part, because your body learns what motions result in what sounds – how hard to blow into a clarinet to make a different pitch or how to keep your hands in tandem while playing guitar. Practicing using your memory helps you to strengthen your recollection.

There are multiple forms of memory that we all draw on every day. A couple of these are auditory and physical, both of which draw on bodily-kinesthetic intelligence. Just as with everything, repetition helps to make your body and mind more capable.

To learn an arpeggio broken down from a chord and play it over and over will help your mind and body to move together, and help build proficiency. As we practice, we strengthen our memories, minds, creativity, and coordination.

Goal areas typically addressed by music therapists for helping peoples with autism generally include: language, behavior, and cognition. Studies have shown that music therapy through audial vibration and practice has shown very repeatable and positive results in these fields.

Some of this progress has been seen in helping autistic individuals to be more willing to go outside of their comfort areas and become creative.  Also, aside from creative comfort, communication capabilities have been known to increase drastically.

Is it likely that this is because of newfound confidence? Or is it more probable that these results are due to the strengthening of the mind and memory?

The ‘Sound’ of Music 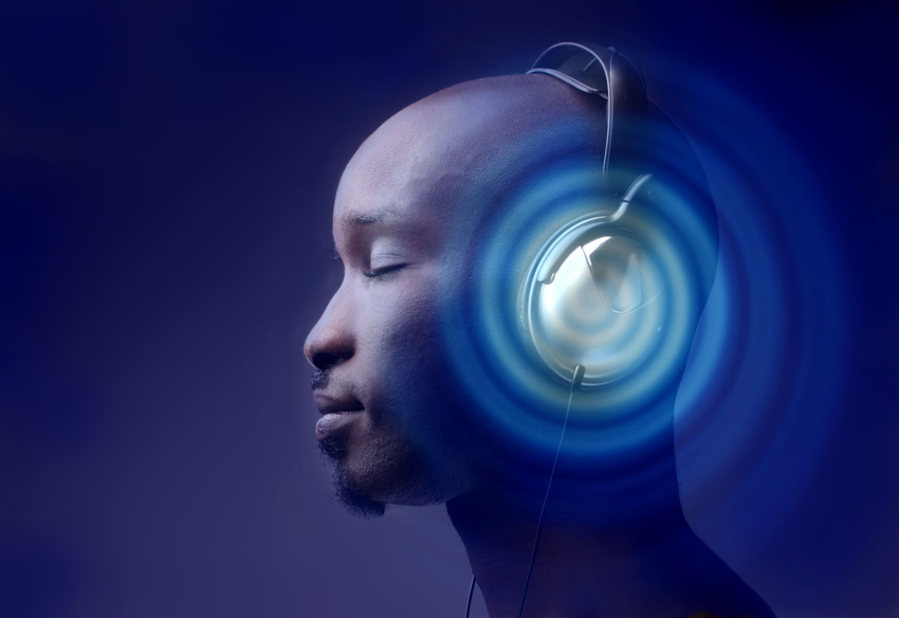 It is believed that when we hear the note progression in a scale put in an appropriate sequence, it triggers a response in our brains. This would suggest that just hearing good music literally unlocks something within us. What is it about the sound of music which lifts our spirits?

It is my belief that a lot of psychology is involved in this interaction between our ears and our minds. It seems evident that whoever is listening to the music of an instrument is highly likely to relate to it in some way.

Our minds tend to seek and find patterns which we perceive as coincidental. As such, it is very common for a person to hear a sad melody while they’re sad and another individual to hear a happy story unfolding from the same progression of notes.

This aside, sometimes certain parts of particular notes will react with a person. I honestly can’t answer exactly why this happens, but I have heard of various studies on the topic.

Some speculation has been done that the zones of the brain which are activated by the proper notes correlate to endorphins, which further suggests that, by definition, music very well may be addicting.

Nick Harding, B.Sc.
Contributing writer at Learning Mind
Nick Harding is an automation engineer who started out with just a drafting degree but didn't want to stop learning. He loves to teach others, as well as himself. Nick's strongest drive is the interest in learning everything he can know and speculating on topics that he can't.