These impressive sites trigger intriguing debates about their true meaning and purposes. The question is who and why created these gigantic representations that were designed in extreme precision. Here are the most famous locations with geoglyphs around the world.

These amazing geoglyphs were revealed during the deforestation in the 1970s amidst the large tropical rainforests of the Brazilian Amazon in the area near Rio Branco. These perfect geometric shapes (squares, octagons, circles, rectangles, and ovals) cover hundreds of meters.

According to locals, it is impossible for a man to create such perfect lines. It is believed that they were created as trenches during the war against the Bolivians. In the early 2000s, it was most commonly suggested that they were foxholes.

American writer Charles C. Mann, in his book titled “1491” on the Americans before the arrival of Columbus, suggests that the forests of Amazon, which were considered pristine, may have been inhabited by large populations. Researchers support that they date back 1,000 to 2,000 years and were of great ceremonial importance. 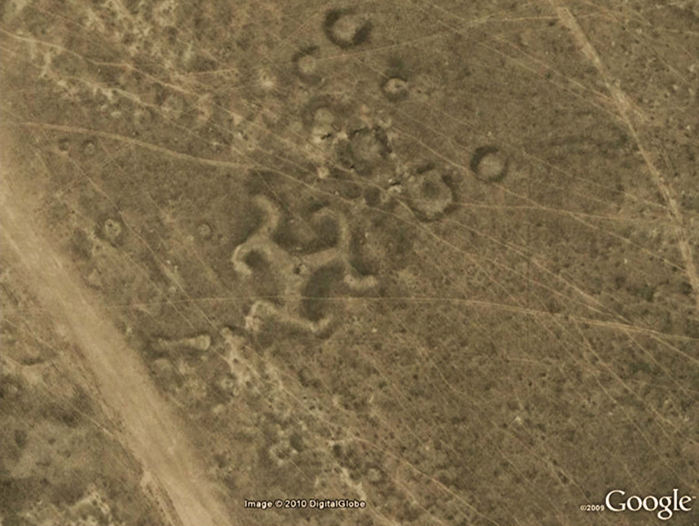 Google Earth traced More than 50 geoglyphs of different shapes and sizes in Northern Kazakhstan, Central Asia, similar to Nazca Lines of Peru. Made of earthen mounds, with a diameter from 90 to 400 meters, these enormous geoglyphs have attracted interest among the scientific community.

What’s more, a massive swastika was discovered among them. The Kostanay University of Kazakhstan in collaboration with Vilnius University of Lithuania came together in a major archaeological excavation project in order to examine these geoglyphs.

“As of today, we can say only one thing — the geoglyphs were built by ancient people. By whom and for what purpose, remains a mystery”.

Discovered in the Paracas Peninsula at Pisco Bay, Peru, the Paracas Candelabra geoglyphs date back to 200 BC. These mysterious constructions that can be seen from miles away and look like a branched candlestick (“candelabra”) were either a representation of the Holy Trinity, as part of an effort on behalf of the Conquistadors to Christianize the locals or a signal for sailors carved into the hill, as the eldest locals supported.

According to another theory, Paracas Candelabra are a representation of a hallucinogenic plant called Jimson weed or even lightning of the creator god Viracocha from Inca mythology. 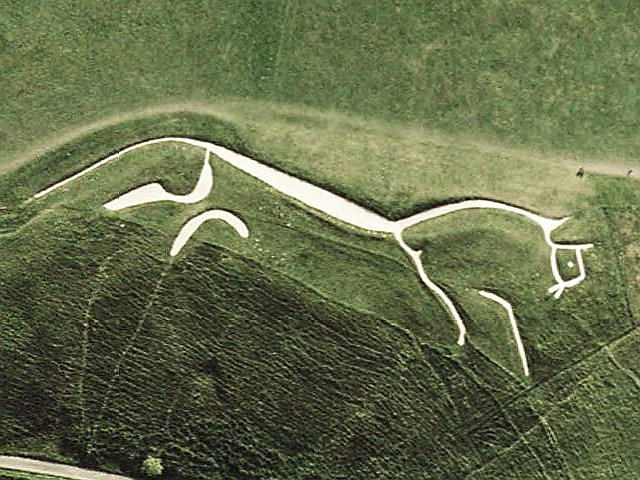 The Uffington White Horse, which was revealed close to the ancient Ridgeway path, is one of the most famous hill figures in Britain. Its lines, created with white chalk bedrock represent a horse or a dragon and are believed to date back to 11000 BC.

It is likely that the tribe who created the White Horse once lived within an Iron Age hill fort. The figure represents either King Alfred, goddess Epona, worshiped by the Celts, or even the dragon killed by St George.

In the Atacama Desert, west of the Andes, over 5000 geoglyphs cover a wide area across parts of Peru, Chile, Bolivia, and Argentina. These geometric shapes, human and animal figures are believed to have been created by the Tiwanaku and the Incas.

They played an important role in the transportation network among the civilizations of South America, indicating where salt flats, water sources, and animal fodder could be found.

Among these geoglyphs, the so-called “Atacama Giant”, also known as “Cerro Unitas”, dominates the desert. This enormous figure with a square head and long legs has been recorded as the largest known geoglyph in the world. Is it dedicated to a deity worshipped by the locals, is it evidence of extraterrestrial visitations or marking of a pilgrimage route? No one can tell for sure. 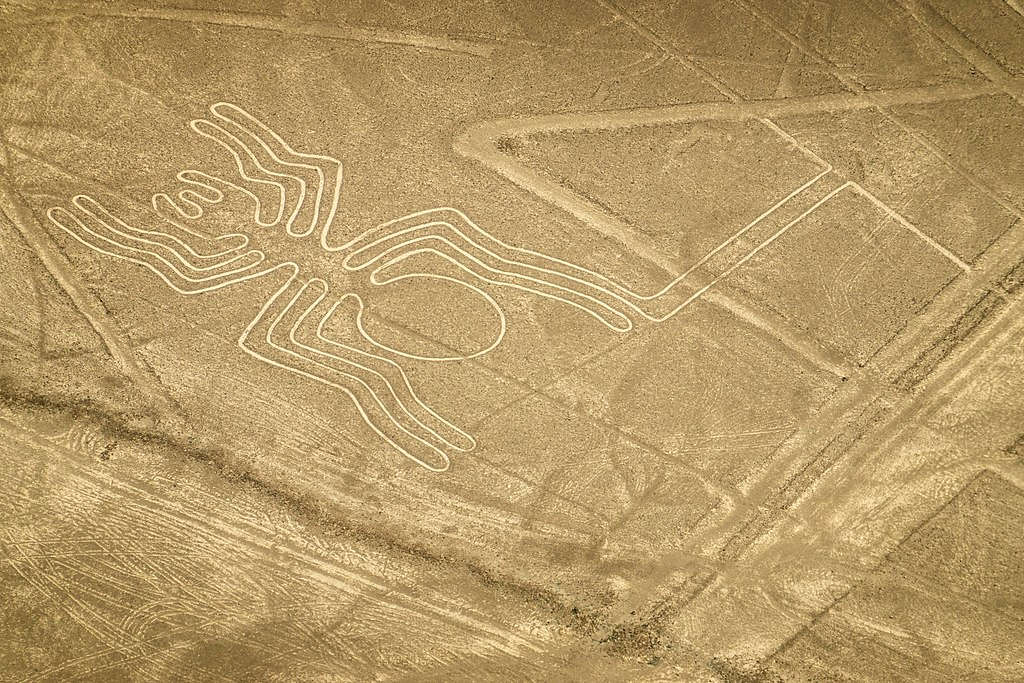 These enormous figures, widely known as the Nazca Lines, were discovered in the early 1900′s into the desert in Peru, about 200 miles south of Lima between the Inca and Nazca valleys. Gigantic shapes and strange symbols cover a total area that measures 37 miles in length and 1 mile in width.

In order to distinguish the forms, one must watch them from a long distance directly above. These perfectly straight parallel and intersecting lines depict animals, plants, and fantastic creatures on a giant scale.

The approximately 70 biomorphs (animal and plant figures) are believed to have been constructed around 200 BC, while the 900 geoglyphs (geometric forms that include straight lines, triangles, spirals, circles, and trapezoids) were constructed 500 years later. These strange forms were discovered in 1927 by Peruvian archaeologist Toribio Mejia Xesspe, who was hiking through the foothills of the surrounding area.

7. Works of the Old Men in Arabia 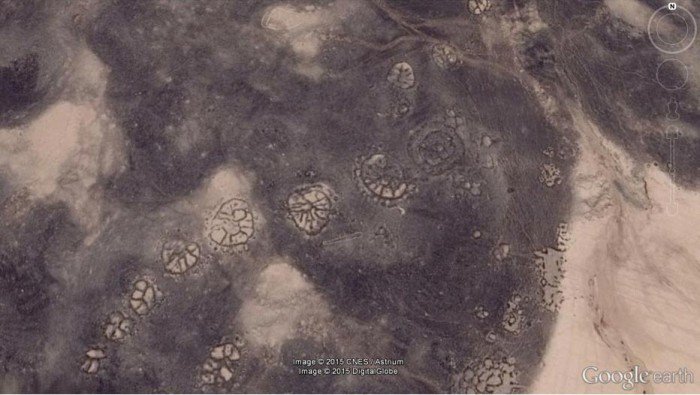 More than a million stone structures called ’The Works of the Old Men’ were discovered in the 1920s by pilots who flew over Jordan. They date back thousands of years and they were either constructed as hunting traps, funerary/religious sites, and seasonal camps. Researchers are trying to build collaboration in order to interpret their purpose and dating with greater accuracy.

In 1931, pilot George Palmer first discovered the so-called “America’s Nazca Lines”, also known as Blythe Intaglios, while flying over the Colorado Desert. What is special about these representations is their enormous size and complexity. These six figures were created by local tribes who inhabited the area around the Colorado River.

Their age was initially estimated to be 450 to 2,000 years, but newer research from Berkeley University dates them around 900 AD. According to locals, the human representations were created to honor Mastamho, the Creator of Earth, and all life, while the animals represent Hatakulya, one of two mountain lions/persons.

Cerne Abbas Giant or the ‘Rude Man’ is an enormous hill figure 120 feet long and 180 feet high carved in chalk bedrock located in Dorset, England. Researchers suggest that it is much earlier than the Iron Age.

Several theories have been supported on this representation of a naked man wielding a club: it is either the giant Greek-Roman god Hercules, a pagan symbol, or a Danish giant. According to folklore, the giant had magical properties and would help women enhance fertility.