These six Nikola Tesla quotes show a visionary scientist who thought in terms of energy vibration and intuition when trying to understand the universe.

Nikola Tesla was a Serbian-American inventor, engineer, and physicist. He was best known for developing the alternating current circuit, a technology we still rely on today.

However, Tesla has some even bigger ideas, conceiving such technologies as the electric motor, remote controls, hydroelectric power, and lasers.

As the following Nikola Tesla quotes show, he also had a unique way of thinking about the world. Despite his scientific background, Tesla believed in an energetic universe and the power of intuition.

These quotes show that he had a very different take on the world from the scientists, technologists, and businessmen of his time.

“If you want to find the secrets of the universe, think in terms of energy, frequency and vibration.”

This quote shows that he was ahead of his time in truly understanding the nature of the universe. In an age when much of the scientific community believed only material things existed, Tesla had some very different ideas. He understood that the universe, rather than being made up of solid objects, was actually a mass of energy vibrating at different frequencies.

“If your hate could be turned into electricity, it would light up the whole world.”

Tesla always had an affinity with electricity. Perhaps this was because he was born during a lightning storm. According to family legend, the midwife considered this a bad omen. She declared that the newborn would be a child of darkness. His mother replied “No. He will be a child of light.” I think that the quote above suggests that his mother was right.

Tesla clearly understood the energy of hate, too. This quote will resonate with those of us that believe that hate and love affect the universe as a whole. This powerful analogy shows the strength of hate. But Tesla knew that negative emotions would never power a peaceful world as we can see from the quotes later in this article.

This is one of my favorite Nikola Tesla quotes:

“What one man calls God, another calls the laws of physics.”

In a world where there seems to be such a split between spirituality and science, Tesla implies that these are just different terms for the same thing. Universal energy fuels our universe and as he says, some people call this God, others call it universal energy, spirit, mother nature, or just the laws of physics.

“My brain is only a receiver, in the Universe there is a core from which we obtain knowledge, strength and inspiration.” 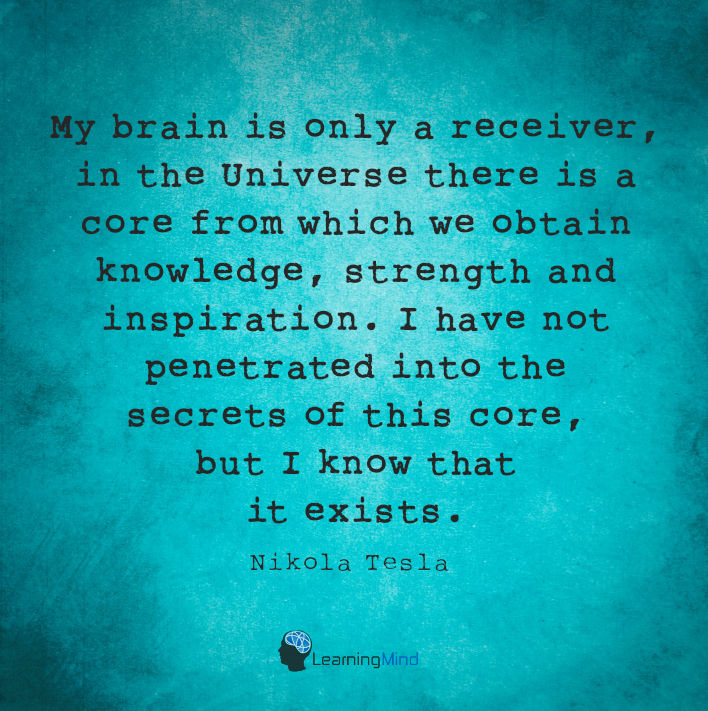 This quote also resonates with those of us that consider ourselves spiritual seekers today. Tesla indicates that he believed in some kind of source energy that we can all tap into. Many of us have experienced what he describes as being a receiver, whether in meditation or during times of creative flow.

“But instinct is something which transcends knowledge. We have, undoubtedly, certain finer fibers that enable us to perceive truths when logical deduction, or any other willful effort of the brain, is futile.”

In this quote, Tesla shows how he believed in more than just logical thinking. He is not the first scientist to say how intuition and imagination can help us have transformational ideas.

Albert Einstein famously used thought experiments to test out his ideas. If intuition and imagination worked for geniuses like Einstein and Tesla, maybe we should learn to use more than just our logical rational minds, too.

And finally, his most inspiring quote of all:

“What we now want is closer contact and better understanding between individuals and communities all over the earth, and the elimination of egoism and pride which is always prone to plunge the world into primeval barbarism and strife… Peace can only come as a natural consequence of universal enlightenment…”

This is one of the most inspiring Nikola Tesla quotes of all. He understood that the ego gets in the way of humankind’s development. Egotistical fighting for superiority will never allow us to achieve the things we could achieve if we combined our resources and skills.

To create peace and harmony on our beautiful planet, we need to work together in love rather than egotistical competition and fighting for resources.

Unfortunately, Tesla didn’t get to see many of his ideas come to fruition. Much like Michelangelo, he was a visionary inventor ahead of his time. He never achieved the fame, fortune or credit he deserved during his lifetime. By listening to this visionary thinker, we could have been enjoying transformational technologies like hydroelectric power and electric cars for years by now.

Being inspired by Tesla in the future

It is never too late to be inspired by the great geniuses of the past. If we follow Tesla’s ideas of working together without egotism and pride and using our imagination and intuition to come up with new ideas, then perhaps we can achieve all that he envisioned and more.

Above all, perhaps we should follow his example of understanding the energetic nature of the universe. Whether we call it physics or God, we can harness this power for the good of all. 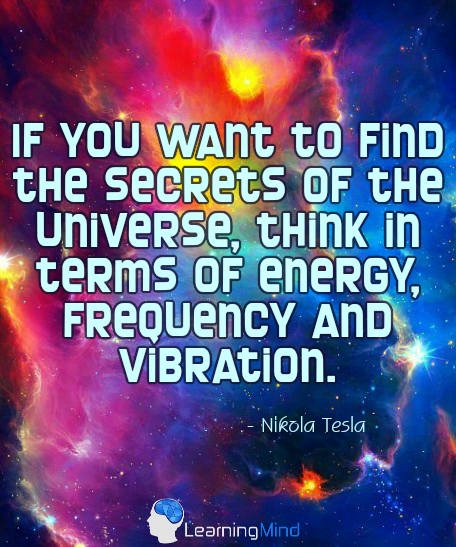