Do you know anyone with a perfectionist personality? Well, you might recognize them from their unique behavior.

Those who have a perfectionist personality don’t necessarily have a positive view of themselves. Of course, this depends on whether we are speaking of adaptive or maladaptive perfectionism, which are two different forms of behavior.

While some are good at holding perfected standards, many are not. On the contrary, many of them think rather low of their performance and achievements, which seems odd. You see, the perfectionists often do really well in school, work or sports, but at some point, they bow out. Why does this happen?

Sabotaging your own success

Some people, more or less, strive to do the best they can. Many people deal with issues in life that prevent them from doing as much or as good as they want. When it comes to the perfectionist personality, being the best is the only way. So, with this attitude, perfectionists can sabotage themselves in the process of trying to be the best.

7 self-defeating behaviors of people with the perfectionist personality:

I know this one is going to sound strange, but some people procrastinate on purpose because they believe they are perfected under pressure. While this method works at times, on other occasions, it proves to backfire and actually decrease productivity, just as most people think it does.

However, the most common cause why perfectionists procrastinate is that they are so worried about their performance on the task that they end up not starting it at all. Perfectionists are often overthinkers and worriers who suffer from so-called analysis paralysis. It leaves them overanalyzing a task or a project in hand and thus prevents them from actually acting.

Waiting until the last moment does not prove successful for all perfectionists and they eventually recognize their self-defeating behavior. Unfortunately, for students, it can be too late, and grade point averages are already set.

As a writer, I make myself seek critique from others. If I don’t, all I will be doing is hiding my mistakes behind what I think to be superb writing skills. I am far from that.

There are some people, perfectionists that is, that hide their work in fear of being rejected or even just criticized. Since a perfectionist personality often comes with self-esteem issues and a good deal of self-criticism, they can’t stand the idea of delivering a mediocre result.

And of course, they absolutely hate the idea of someone noticing their mistakes. Perfectionists suffer a lot when someone criticizes their work because for them, producing an unsatisfactory result means producing none. And the truth is that they already criticize themselves a lot.

However, mistakes are a great opportunity to learn and grow. When you are too busy denying or hiding them, you simply don’t grow as a person and a professional. This behavior prevents perfectionists from learning valuable things that can help them improve. In the end, all they have is what they thought was perfect work but sometimes turns out to be a failure.

Taking a look at athletes, we see many examples of perfectionist personalities. Many of these athletes perform for years, reaching astonishing heights in their performance, only to suddenly quit. Why do they quit at the pinnacle of their performance? That’s because they are afraid of failure. In fact, most of the self-sabotaging behaviors of perfectionists stem from this fear.

This fear causes an unhealthy behavior called “unwillingness to perform”. It is close to the analysis paralysis that we talked about above but is more about a conscious decision to not take action. If they stop performing, their spotless record will remain untainted. The thing is, there could be even more wins in their future, but they will never know, and so they sabotage their career.

I’m going to use the example of relationships here. Sometimes two people enter into a relationship with extremely high expectations. It’s not that standards don’t matter. They do. It’s just that unreal expectations of any human being is just plain wrong.

The perfectionist personality, however, expects their partner to be just as perfect as they are, or what they see as their perfection. When this isn’t the case, then problems in the relationship start. Going into a relationship with unreal expectations is definitely self-defeating behavior.

Yes, many people have a dream-like idea of marriage and expect their partner to be perfect. You don’t need to be a perfectionist for that. The problem with the perfectionist personality is that they tend to have unrealistic expectations in all areas of life. As a result, they may sabotage themselves because they believe that what they’ve achieved so far is not good enough.

It’s nice to dream big, but sometimes, lowering your expectations can actually bring you peace and happiness. If you aim way too high, you end up feeling like a failure no matter what you accomplish in life.

A perfectionist sometimes figures that if they avoid things, they will not fail. Well, of course, they won’t fail because there will be nothing to contend with. But there will also be a lack of happiness which could be enjoyed if they would just take a chance. As you see, this unhealthy avoidance stems from the fear of failure too.

Perfectionists rarely take chances at breaking routines, and it can cause them true and unconditional friendships, not to mention any other opportunities they feel aren’t up to par. Avoiding things in this manner can eventually cause anxiety or depression due to the pressure applied by the perfectionist.

6. Being stuck in parental standards

When your parents are never content with your achievements and criticize you a lot, you learn that whatever you do, it is not enough. So you try to reach the impossible – perfection. You become critical of yourself and punish yourself for the tiniest mistake. Unfortunately, parents are often to blame for their children’s maladaptive perfectionism.

In all things, you want perfect standards, and this is just impossible with today’s world. Not everything will be perfect all the time, and it rarely even attains perfection most of the time. It’s hard to change these views considering your parents instilled the belief system and the goal of perfection.

7. Too ordered or neat

It goes without saying that perfectionists keep an ordered and neat life all of the time. Their homes are usually neat, their work is usually in order, and they have little eccentricities that are similar to obsessive-compulsive behaviors.

The self-defeating aspect of this behavior is that while they are keeping everything in perfect order, many opportunities are passing them by. They devote so much time to keeping it all perfect and neat that they don’t actually live.

And of course, this approach to life doesn’t leave much space to spontaneity either. But you know what? The best moments in life are not those you carefully plan but those that happen spontaneously. When you follow a specific schedule every day and plan everything in advance, life is simply passing you by.

I hate to say it, but sometimes you can be a little too focused on everything being in perfect order… and yes, it can be self-defeating.

If you are a perfectionist, how can you stop these self-defeating behaviors?

It’s not easy to stop self-defeating behavior which comes from a personality ruled by perfectionism. If you were raised this way, it will take careful and consistent reminders to self that life is more than a perfect bubble. Mistakes are good things, and we must learn that they teach us valuable lessons.

Athletes who grow frightened of the next phase in their career must push themselves to go forward and see what fate has in store. Whether they remain strong and successful or if they fall back a bit, there’s always a second chance to go at it again. So perseverance must come into play. Many athletes require a good support system to stay in the game.

Stop procrastinating everything, and try to complete a task as soon as it comes to you. Practice doing this more and more until you rarely procrastinate as much anymore. In relationships, loosen up and realize that no one is perfect, and neither are you. Sorry, you’re not perfect, you must get this through your thick perfectionist skull.

If you need help with breaking this cycle of perfectionism, there are professionals who can help. Those who have a perfectionist personality actually have a personality disorder and should seek help if they cannot help themselves.

If this is you, stop cleaning everything for a moment and think this through. Finally, here is a quote by Salvador Dali to give you some food for thought about perfectionism: 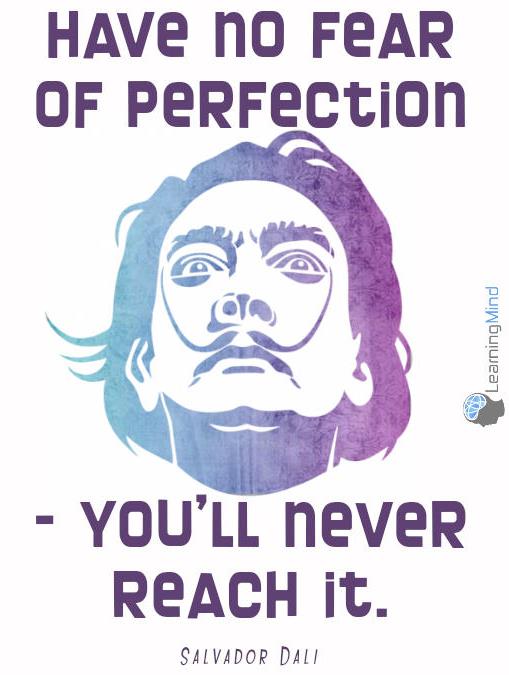