NASA’s Juno Probe just sent back the most breathtaking pictures of Jupiter! We’ve waited 5 years for this moment!

The beauty of the cosmos is drifting down from heaven with each mesmerizing image of the universe’s celestial bodies. I am in awe, as much as the entire world is at this moment. When viewing close-ups of Jupiter, the largest planet in our solar system, I am amazed! No man-made structure could ever compare to this intelligent design.

It took time, but finally, we get to view pictures of Jupiter in its pure beauty.

Launched in August 2011, the Juno spacecraft, worth 1 billion US dollars, finally settled into orbit around our gas giant, Jupiter, located 415 million miles from earth. The probe, which is the size of a football field, was able to take photographs of never before seen angles of the planet and its nearby moons.

But it wasn’t easy to capture these pictures of Jupiter once we reached the planet. In fact, Juno had to complete wide arcs around the planet in order to avoid Jupiter’s radiation belt. This intense radiation can damage the probe’s sensitive electronics, thwarting the mission’s objectives-definitely ruining our chances of seeing more of Jupiter’s face.

So, in October, in an attempt to increase these flybys, NASA attempted to fire Juno’s thrusters and increase speed. This would have given the probe an opportunity to capture more images, every two weeks instead of once every two months. It would have made a huge difference. Unfortunately, this couldn’t be done due to sticky valves. Our fingers are crossed with NASA’s next move.

Unfamiliar with Jupiter? That’s okay, here are a couple facts about this gas giant.

The knowledge of Jupiter has been with us for some time, probably longer than you thought. The ancient Babylonians discovered Jupiter sometime in the 7th or 8th century BC. Jupiter was considered the God Marduk by the Mesopotamians and Thor by Germanic Tribes.

Most of you know about Jupiter’s great red spot, and I am sure you are aware that it’s a storm. Well, did you know that this storm has raged for over 300 years and is so large that our planet could fit into it three times? Now that’s a weather phenomenon if I ever heard of one.

Likewise, here are a couple facts about the Juno Probe as well!

Did you know that the Juno probe has only as much space as the hard drive on our computers? Apparently, this is designed to use a single board computer, which is adept for high radiation environments.

Juno has also traveled further than any solar powered craft, to date. Because of its three large solar panels, Juno can generate enough power to go great distances.

What are we viewing?

Pictures of Jupiter’s poles, astounding auroras, and strange cloud formations are just some of the eye candy we get. Other images scanning deep into the cloud tops also leave us intrigued, and definitely wanting more. 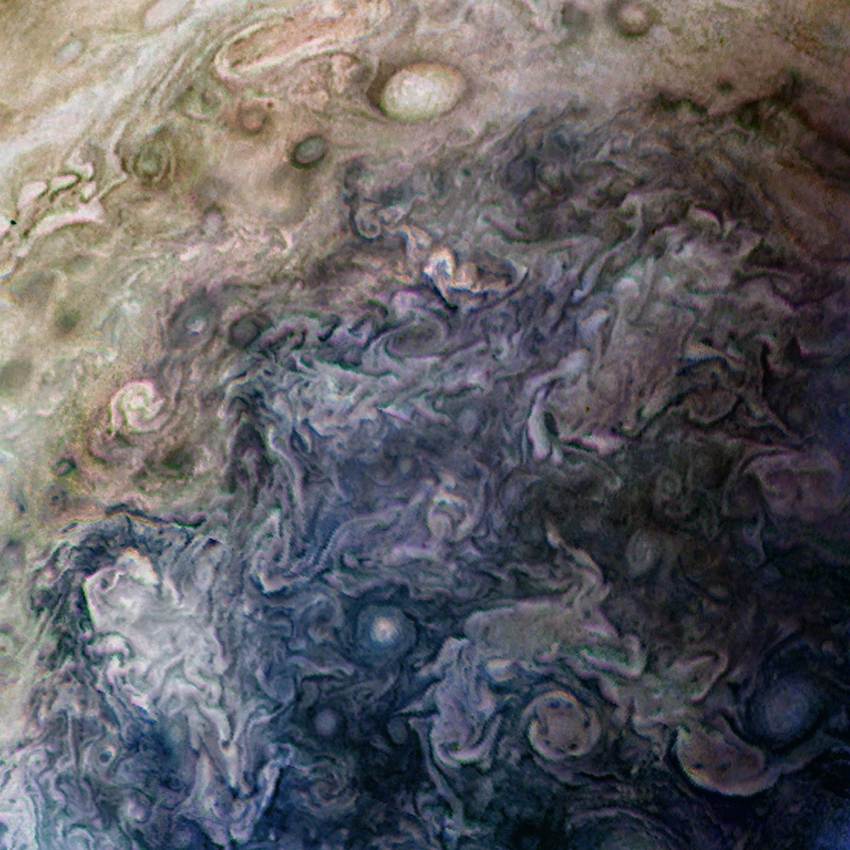 Jupiter completed it’s most recent flyby on March 27th, sending more of these breathtaking images back to earth. Although the images are originally in grey, amateur astronomers use their skills to transform the images into living color, full of detail and passionate display.

The next flyby is scheduled for May 19, 2017. The probe will be put to rest in either 2018 or 2019, by plunging it to its death in Jupiter’s cloud cover. This will be done to avoid spreading any of earth’s bacteria to Jupiter’s moons.

Although this is kind of sad, if you like cute little spacecraft probes, that is, it will all be worth it. To view never before seen images of our solar system’s largest planet is to catch a glimpse of pure heaven. I cannot wait to see more!