Poignant art. Gerhard Haderer creates realistic drawings that say a lot about the way we live. The artist has made a career out of satirical drawings that resonate with the honest truth about today’s society.

We present some of the talented illustrator’s work and explain what it says about life today.

Who Is Gerard Haderer?

Cartoonist and satirist Haderer was born in 1951 in Leonding, Austria. He discovered his passion for art in his youth and studied at the technical arts school in Linz from 1965 to 1969.

Haderer started as an independent commercial artist and draftsman, working on many illustrations, advertising, and designs for the Salzburg board. He has even produced designs for satirical puppet shows.

Haderer’s first satirical works first appeared in the Austrian magazine, Watzmann. The Austrian weekly, Profit, then started to publish his works. Word of him spread to other German-speaking countries. He became known for producing art that made social statements.

The Link between Art and Society

Since time began, art has had the power to influence the way we think and act. It’s evident how seriously governments take the effect of art, though they may not always articulate their viewpoints. For instance, during World War 1, people used movie cameras to film trench warfare for the first time. When movie audiences saw these films, they ran out of theaters screaming. That led to governments banning them altogether.

20th-century dictators understood how art could influence the population. Hitler set up the Ministry of Public Enlightenment and Propaganda, directed by Joseph Goebbels, which made sure that magazine didn’t publish anything without the government’s approval.

Stalinist Russia also understood the power of art. Artists depicted Stalin as a god in many of their paintings. Furthermore, they always portrayed workers as contented with their lives under his leadership. Architectural projects showed the power of Stalin’s regime.

Many art pieces have changed the way we view the world. Pop artist Andy Warhol gave us insight into the power of consumerism through many of his works. Art continues to influence in this day and age.

Iceland artist Olafur Eliasson partnered geologist Minick Rosing to bring in 12 icebergs from Southern Greenland. He arranged these like 12 digits on a clock. It’s easy to guess the statement they were trying to make about climate change.

Like other artists, Gerhard Haderer uses his talent to raise peoples’ awareness about the state of the world. These realistic drawings are some of the best representations of his satire. 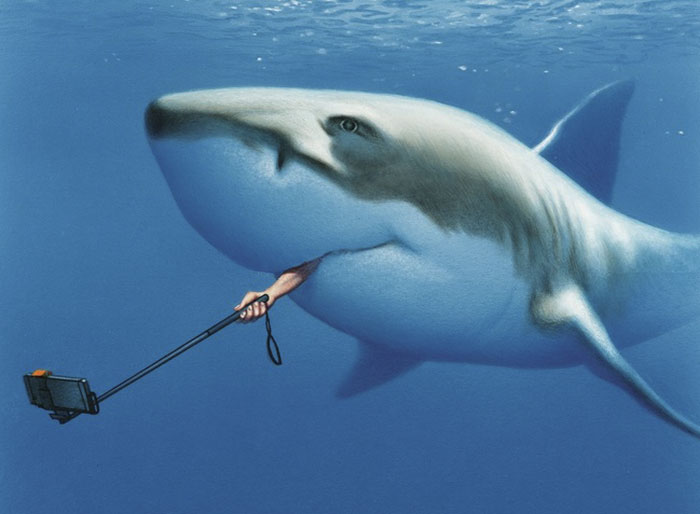 This somewhat frightening photograph shows a satisfied shark swallowing a selfie lover. Haderer makes a point about how technology has made us dangerously self-obsessed – we often put a higher value on our SMS messages or selfies than our lives. The evidence of this is the many people who check texts while crossing busy roads or take photos in the middle of raging storms. 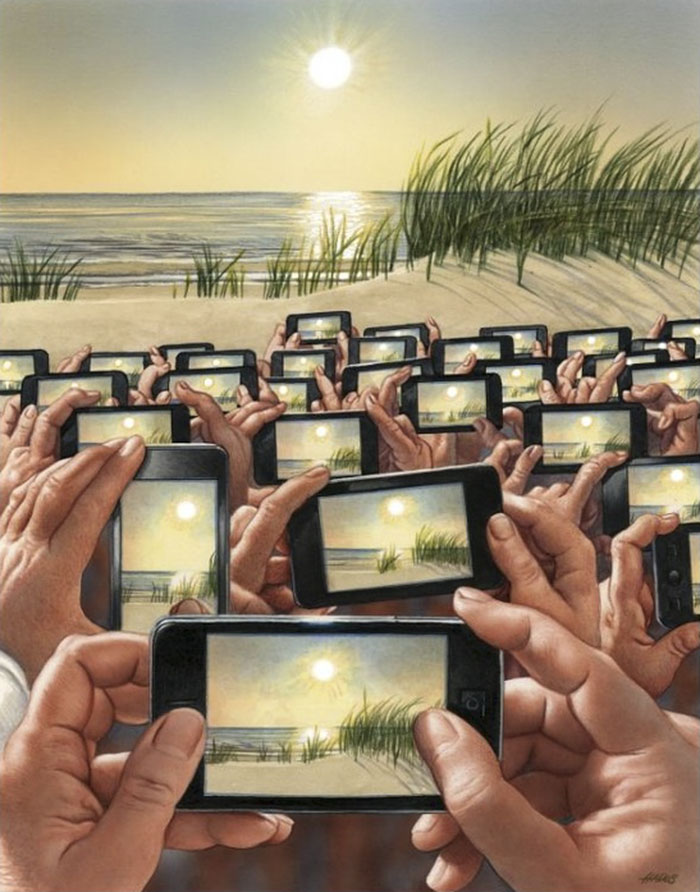 This picture is another of Haderer’s takes on our obsession with technology. We spend so much time taking photographs of beautiful sunsets and inspiring live concerts that we forget to enjoy them. 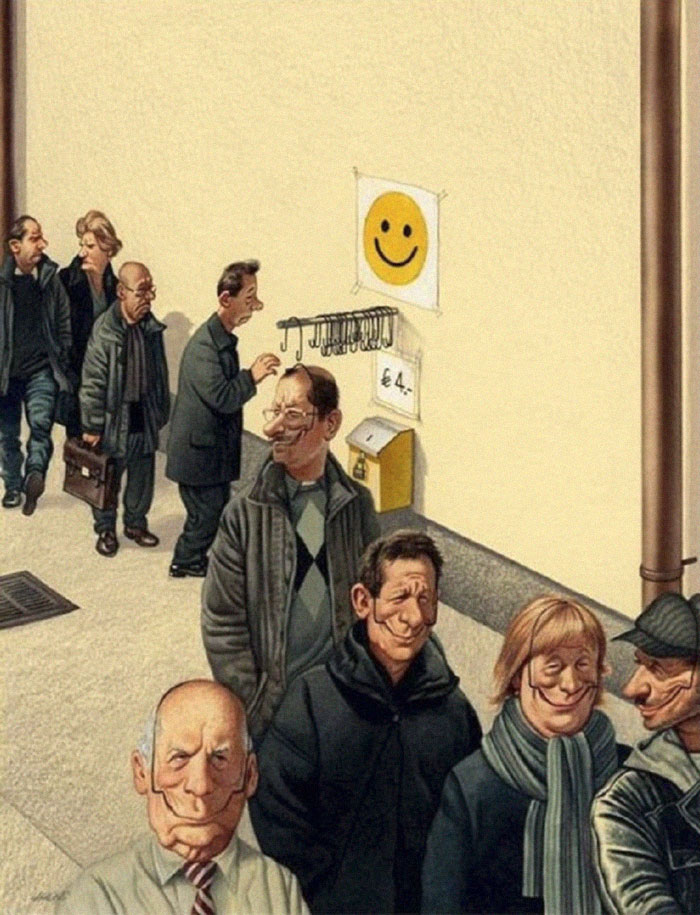 This picture shows unhappy men and women stopping to buy a contraption that promises to give them the happiness they desire. Again, this is Haderer’s way of saying that society’s belief that technology can provide it with joy is misplaced. 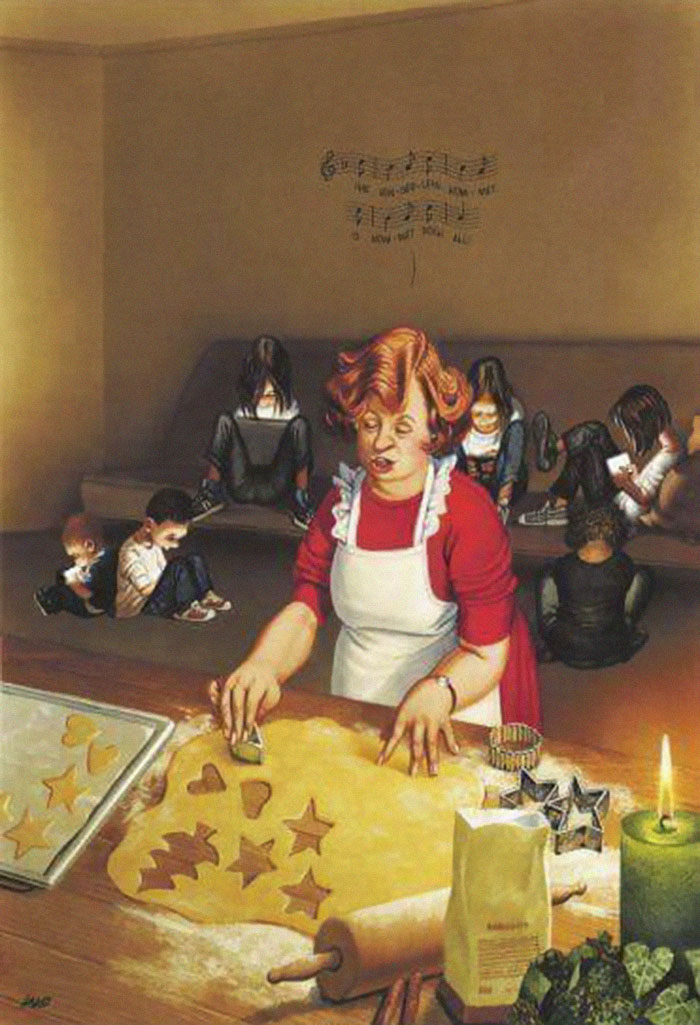 Do you remember how you used to enjoy watching mom bake cookies for Christmas and other festivals? There’s no time for that these days because we spend all of it on our phones. Haderer describes the cost of progress. 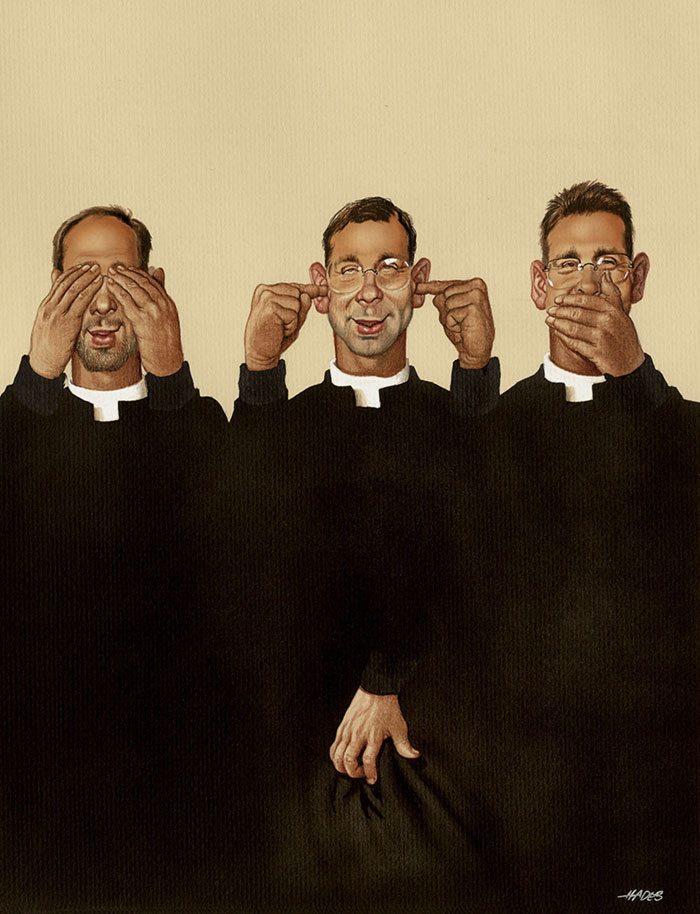 This picture is perhaps Haderer’s take on the hypocrisy of religion. Members of religious communities often sweep scandal and other misbehavior under the rug. Many pretend not to know the goings-on. 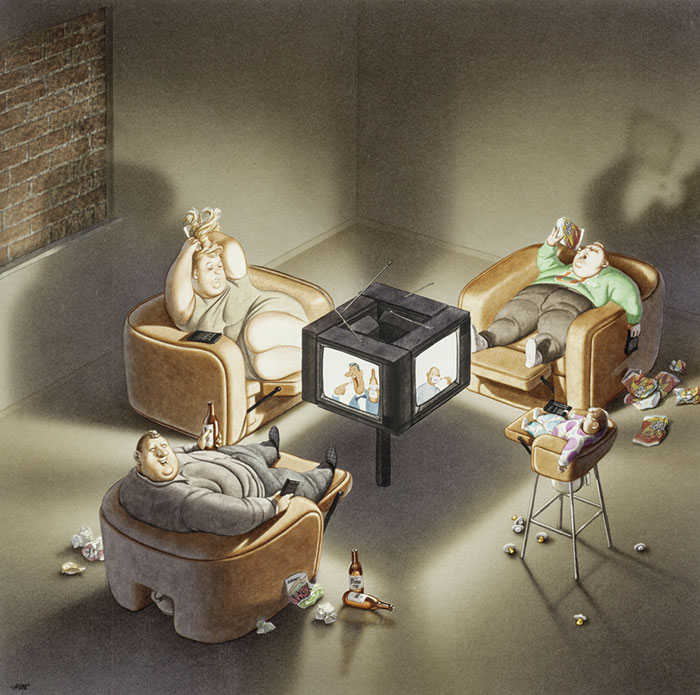 This picture shows a family, with each of its members looking at a small TV screen. Haderer is saying that we are so involved in the activities that we miss out on the big picture – quality family time. 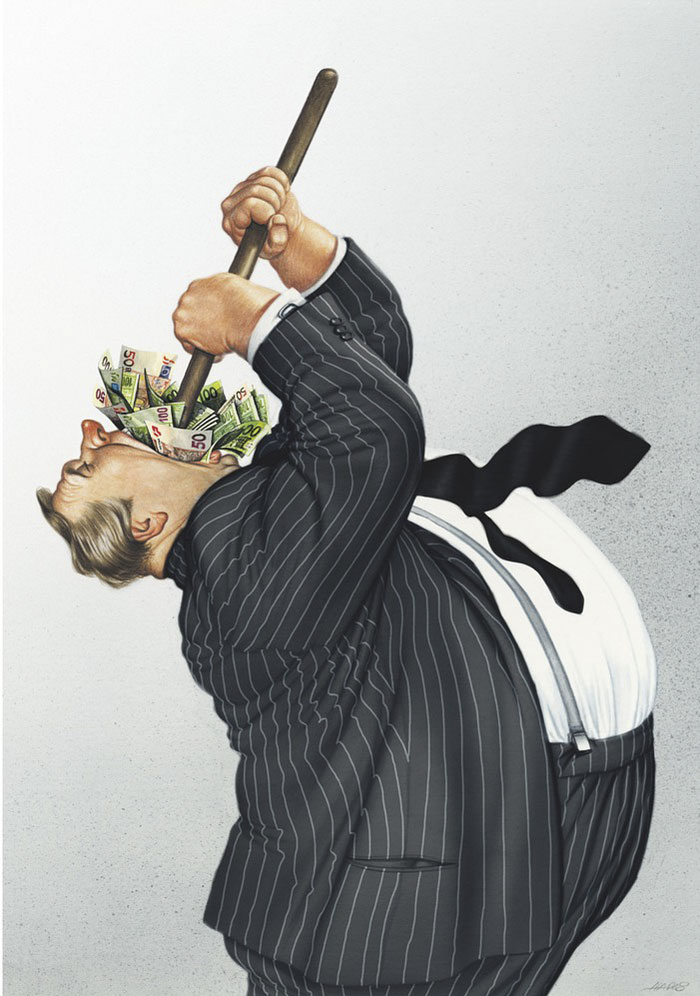 Haderer paints a CEO hungrily swallowing all the money available to him. He points to the misguided greed of some wealthy corporations, which do not use their resources to benefit society.

In all, Gerhard Haderer’s drawings offer a realistic look at our life and open our eyes to how the trappings of modern society have robbed us of our self-awareness and made us egocentric.

Michelle Liew, B.A.
Staff writer at Learning Mind
Michelle Liew is a professional writer and teacher with over 20 years of experience. She earned a Bachelor of Arts (English and Literature) from the National Institute of Education/Nanyang Technological University of Singapore and has taught English language, literature, and music in Singapore schools for over 12 years. Michelle's vast experience of working with children allows her to share valuable advice on parenting, child psychology, and education with her readers.