The celestial beauty of the heavens wouldn’t be complete without the allure of the Super snow moon in February. You don’t want to miss it!

Ever since I was a small child, I would gaze into the heavens in amazement. I would reach up and try to grasp the stars in my hand. Also, I would trace the moon with my finger and yes, I did imagine the craters as little indentions on cheese.

My imagination was fueled by the beauty of the skies. I even heard the story of the man in the moon. If I looked close enough, I could make out his features. But it would be years before I learned the names of the moons according to the months, including the supermoon coming as 2020’s February full moon.

What Is the Super Snow Moon?

On February 9, 2020, our full moon will rise and be known by many people as the super snow moon. It will be bright, and illuminate deep snowfall in some areas of the world, hence the name.

It will also be at its perigee, meaning it will be larger than usual, this is where the “super” part of the title applies. To me, this special full moon will add warm feelings to this darkened cold and sometimes heavy time of the year.

There’s another fascinating fact about the special February moon, as well. Every 19 years, it doesn’t exist. That’s right, after almost two decades of February full moons, both January and March have two full moons and February is void of this magic. It sounds kind of sad, but also extremely interesting. So, every now and then, we won’t see the super snow moon, so we should enjoy its beauty when we can.

But on the other hand, we witness a phenomenon called the dark moon, which is just as exciting as it is ominous. The wonders of the world never cease to amaze me.

Here’s a secret – not everyone calls the February full moon the super snow moon. No, not at all. This moon has many names, deriving from many areas around the world.

For instance, the English call this full moon, the “Wolf Moon”. From long ago both in Medieval  England and among Pagans, this moon was called “the storm moon”. So, although the February full moon names have similarities, they are different from region to region. In the U.S., there are numerous names for this supermoon phenomenon.

So, I guess you’re wondering why the February 9th full moon is called the super snow moon, aren’t you? Well, that is because according to weather reports and the farmer’s almanac, February receives the most snowfall in the United States. Now you can see the obvious correlation.

However, the native Americans had many names for this deep winter moon. These names varied according to the different tribes in the U.S.

Many names for the February full moon:

1. Wishram of the Pacific Northwest

The native people of the Pacific Northwest called the February moon the “Shoulder to shoulder around the Fire moon” because they literally had to sit tightly side by side around the fire to stay warm.

2. Cherokee of the Southeast

The Cherokee natives considered the full moon of February the “bone moon”. This name came about because of the scarcity of food during the deep winter. Usually, the majority of nutrition came from the marrow of bones or bone broth.

3. Lakota of the Southwest

The February supermoon was also called the “Moon when the trees crack because of the cold”. Wow! Can you imagine the deep cold that inspires such a name?

4. Arapaho in the Mid-West

Natives of this area called the February full moon, “Frost sparkling in the sun” because even though February is one of the coldest months in the U.S., the snow which covers many areas seems to sparkle under the moonlight as if it was light from the sun. When observed, this kind of beauty couldn’t possibly be easily forgotten.

There are many other notable Native American full moon names such as the “Coyote moon” originating from the Shoshone people’s story about fox and coyote both wanting to be the moon. It’s an interesting and fanciful story. Then there is the Cree who considered the February moon, “the old moon”.

The list goes on and on, with most names either representing the frigid cold or the lack of food for the native people. One of the most memorable ones is “the hunger moon” because it represents the simple fact that February was a month when everyone, even though they were starving, remained strong with whatever resources they had available.

But, I will say that the super snow moon remains a favorite, simply because it invokes a feeling of power. Now, that’s a much better way to look at this beautiful phenomenon.

So, when can you see the February super snow moon? 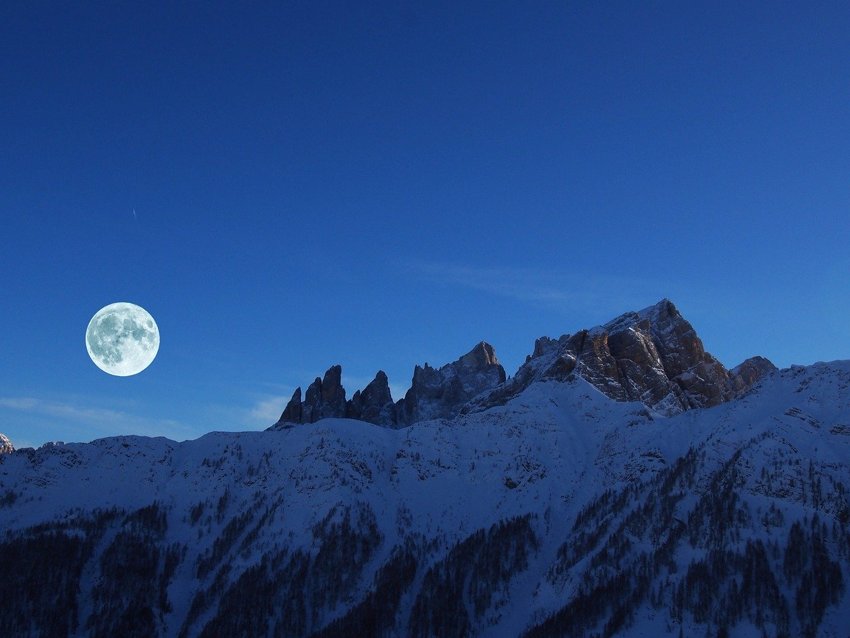 As with all the other magnificent full moons each month, the February moon shouldn’t be missed either. The moon will be at its fullest on Sunday, February 9, 2020, at 2:34 a.m. EST.

If you live in the U.S., this time or any hour close to this time may be a little late or too early for some. The alternative would be to view the fullest part of the full moon as late as you can on Saturday night.

Use these opportunities to get great images of the super snow moon. In fact, each month, don’t miss a capture of the full moon, compare them and notice changes in position, coloration, size, and beauty.

It’s been a while since I lay in the grass and stared up into the heavens, but I think I might wrap uptight and lay under the super snow moon for a while, careful not to fall asleep and freeze. After all, I’ve also heard this moon represents changes as well. We’ll see!