When Albert Einstein stipulated his theories on general and special relativity, he proved that travelling with the speed of light is the absolute limit any material object could achieve.

Yet, in 1994, a Mexican scientist said that travelling faster than light was possible while Einstein’s theories would still hold true. That’s the absolute paradox.

Humans can travel faster than a certain limit without disqualifying the theory that says that humans cannot travel faster than this limit. Greeks have a saying “you can’t have the pie intact and your belly full at the same time”. Well, it seems we can.

The underlying principle behind the famous E=mc2 says that:

The relationship between the energy and the mass, means that the kinetic energy of an object will increase its mass. The faster an object moves, the bigger it becomes in mass. This is not even observable in speeds of even 1% of the speed of light.

At 10% warp the mass increases by 0.5% normal. But if one pays attention to the fact that the constant is squared, this means that the closer one gets to the speed of light the more exponential is the mass dilation.

At 90% warp, an object’s mass has been doubled. At warp 1, the mass becomes infinite just like the energy required to move it. This is why according to one of the two pillars of our science (the other being quantum mechanics), it is impossible to exceed the speed of light.

Scientists have been trying to disprove Einstein’s theory without ever being able to do so.

However, this changed in 1994, when Miguel Alcubierre, presented a theory that depicted that it was possible to achieve speeds of warp one and above, without contradicting Einstein. The notion was to harness the properties of space itself. Its expansion and its contraction.

The hypothesis was that a ship at any point in space would still not travel faster than light on its own power but could employ a propulsion system, which Dr. Alcubierre sketched, that could theoretically manipulate Einstein’s dimension of space-time, through the generation of a “warp bubble”. This bubble would contract space in front of a spacecraft while expanding it behind the spacecraft.

A ship equipped with an Alcubierre Warp Drive could ride the wave and accelerate to high speeds or even time travel.

Many would hasten to compare Alcubierre’s design with the fictitious propulsion system of the old TV series of Star Trek. It may be reminiscent of the concept, but it is actually quite different. Alcubierre’s design is a mathematical model that stipulates that the ship would actually be pushed away from one point and drawn to the other simply by taking advantage of space-time itself.

A close comparison of the drive would be a moving walkway at an airport. The passenger’s legs are not moving faster while the walkway doubles his speed. This is what Dr. Harold G. White used when he announced in 2013 that NASA will take advantage of Dr. Alcubierre’s design and begin research on the construction of such a propulsion system.

Dr. White is trying to see if he can propel a proton to travel at warp speeds. This is done at a laboratory that was constructed in a way that it would not be influenced by the slightest of motions even the ones produced by someone walking nearby. 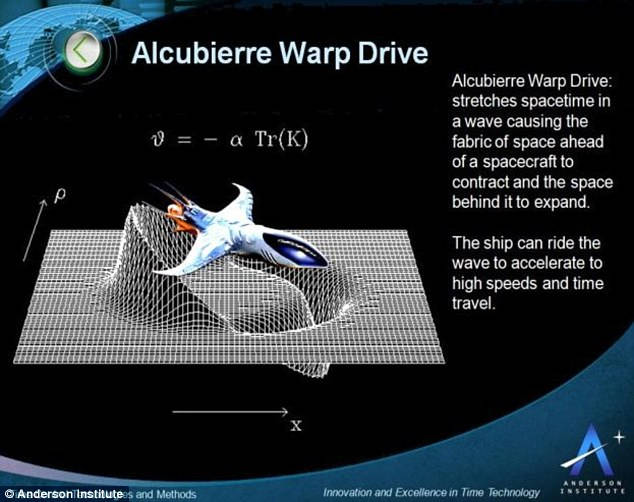 In an interview at the New York Times, Dr. White said that space has been expanding for 13.7 billion years ever since the Big Bang. During this period, there were times that space expanded in explosive inflations that forced two points to drift apart at very high speeds. If nature can travel at the speed of light, there is a possibility that one of nature’s objects, i.e. a human being, can also travel at warp speeds.

He does not believe that constructing a spaceship that can take advantage of this concept in the near future is possible, but he does believe that his research will open the door for space travels that can reach further and faster than ever before.