Did you know that the seven wonders of the ancient world were part of a list compiled for an ancient travel guidebook?

Greeks who traveled all over the Egyptian, Persian, and Babylonian lands of the 4th century B.C. used to list every remarkable construction as a marvel of the world. The best-known travel guidebook was the one created by Greek-speaking epigrammist Antipater of Sidon around 140 B.C.

Let’s see which were considered the seven wonders of the ancient world and why.

1. The Great Pyramid at Giza, Egypt 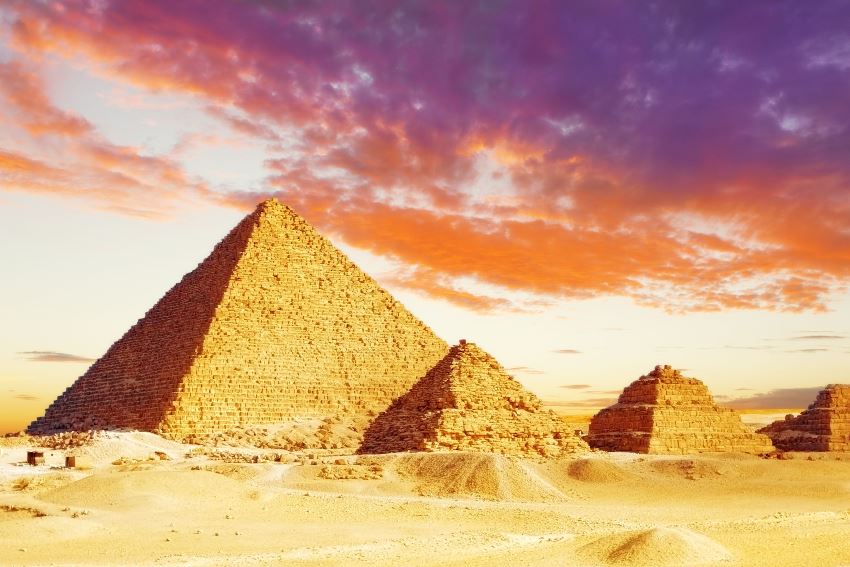 The Great Pyramid is located at Giza, on the west bank of the Nile River, north of Cairo. Built as a royal tomb of Pharaoh Khufu (Cheops) between 2700 B.C. and 2500 B.C., it’s the oldest and the only ancient wonder that has survived to this day.

It covers 13 acres and is estimated to contain more than 2 million stone blocks that weigh from 2 to 30 tons each. According to scientists, the Egyptians used log rollers and sleds to move the stones into place. The sloped walls, intended to mimic the rays of the sun god, Ra, were initially built as steps and then filled in with limestone.

The interior of the pyramid includes narrow corridors with ascending and descending passages and hidden chambers in order to prevent robberies. Despite some great treasures found in the interior, it is believed that the content was looted.

2. The Hanging Gardens of Babylon, Iraq 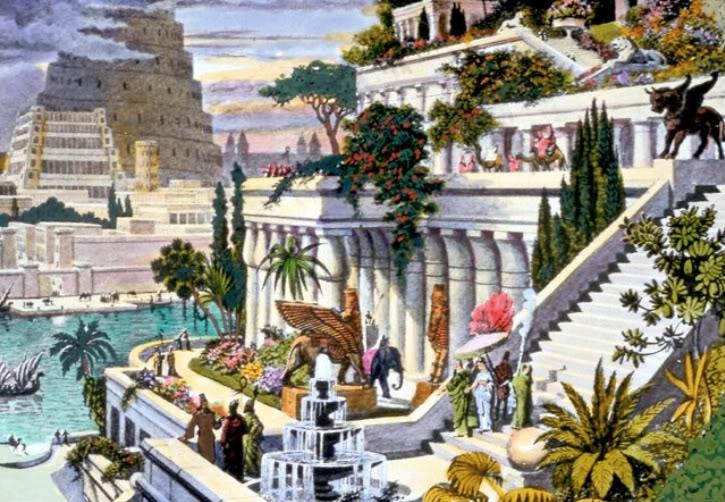 According to legend, Babylonian king Nebuchadrezzar II in the 6th century B.C. planted a maze of waterfalls and dense vegetation near the Euphrates River. The gardens, which rested on tall stone columns 75 feet high, were planted to ease his lover Amytis’ homesickness for the natural beauty of her home.

There was a huge square brick terrace that was laid out in steps like a theater so that people could walk underneath the beautiful gardens. There are multiple accounts of the gardens in both Greek and Roman literature, however, no mention of the gardens has been found in Babylonian inscriptions.

As a result, most modern scholars believe that their existence was part of an inspired and widely believed, yet, fictional tale.

3. The Statue of Zeus at Olympia, Greece

The Athenian sculptor Phidias crafted the famed statue of Zeus around 450 B.C., which was placed in the temple of Zeus at Olympia. The figure of Greece’s Olympic deity, decorated with gold and ivory, depicted the god of thunder seated bare-chested at a wooden throne.

Two carved sphinxes, mythical creatures with head and chest of a woman, body of a lion, and bird wings were holding the thrones’ armrests. According to legend, the temple was struck by lightning after the sculptor Phidias asked Zeus for a sign of his approval.

The Zeus statue graced the temple of Olympia for more than eight centuries, until its eventual loss and destruction during the 5th century A.D.

4. The Temple of Artemis at ancient Ephesus, Turkey

However, the most fabulous structure, a marble temple built around 550 B.C. and 350 B.C., designed by the Cretan architect Chersiphron and his son Metagenes, was decorated by some of the most celebrated artists of the ancient world.

The building burned on July 21st 356 B.C., according to legend the same night that Alexander the Great was born. About six years later, it was restored on the same site with marble columns and a stunning statue of Artemis, until its destruction by Ostrogoths in 262 A.D. In the 1860s the first ruins of the columns were discovered at the bottom of the Cayster River.

5. The Mausoleum at Halicarnassus, Turkey 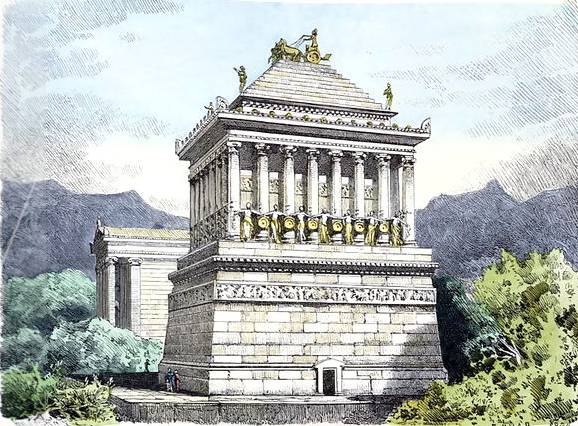 Located in Halicarnassus, in southeastern Turkey, the Mausoleum was a tomb with incredible marble and gold details built by grief-stricken Artemisia for her husband, Mausolus, the king of Carnia in Asia Minor, after his death in 353 B.C.

This construction of approx. 135 feet height, had a complicated design, consisting of three rectangular layers, as an attempt to combine Lycian, Greek, and Egyptian architectural styles. It was made entirely of white marble and is thought to have had a pyramid-shaped roof.

The tomb was at the top of the roof. It was destroyed in an earthquake in the 13th century and its remains were later used in the fortification of a castle. In 1846, some of the pieces were removed from the castle and now reside, along with other relics, in London’s British Museum.

6. The Colossus of Rhodes, Greece 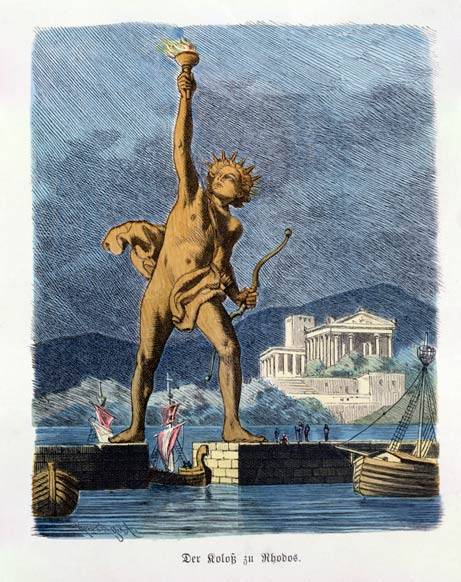 For 60 years the enormous bronze statue of the God Helios lifting a torch with one hand and holding a spear in the other graced the harbor entrance on Rhodes Island. It was 100 feet high, the tallest of the ancient world.

It collapsed during an earthquake in 226 B.C. Hundreds of years later, the Arabs invaded Rhodes and sold the remains of the statue. It was once believed that the statue stood with one leg on each side of a harbor, but researchers now believe that the statue’s legs were built close together to support its immense weight.

The Colossus of Rhodes was an inspiration for the Statue of Liberty.

7. The Lighthouse of Alexandria, Egypt

Designed by the Greek architect Sostratos and completed around 270 B.C., the approx. 400-foot lighthouse was located on the small island “Pharos” near Alexandria during the reign of Ptolemy II.

The lighthouse guided the Nile River ships in and out of the city’s busy harbor, while a mirror reflected sun rays during the day up to 35 miles away. Ancient coins that were found depict its structure: a square level at the bottom, an octagonal level in the middle, and a cylindrical top.

The lighthouse was gradually destroyed during a series of earthquakes from 956 to 1323.