Did you know that in the center of our galaxy exists what is basically a ruthless vacuum in space and time? That’s right, our entire galaxy, like many other large galaxies, rotates around a black hole.

It is not impossible to speculate that the helix-like shape of the Milky Way is owed to the black hole’s gravity. The supermassive black hole is the largest type of black hole, and in our galaxy, it is located near an area that scientists have named Sagittarius A. The black hole has approximately 4,000,000 times the mass of our solar system’s Sun.

When a star undergoes a supernova explosion, it begins to implode or collapse into itself since the internal temperature is no longer enough to hold its weight. The matter of a massive star concentrates into a tiny amount of volume, and the hole is formed, with a gravitational field so massive that it pulls everything around it towards it.

It’s safe to say that anything that passes the event horizon of a black hole (the point where it is physically impossible to go back due to the gravity), does not fare well. The speed with which the black hole pulls objects causes disintegration.

It is no surprise then that something that causes so much awe and speculation needs to be further examined.

That is the reason why a new, Earth-wide telescope is being designed, specifically for the purpose of observing the Saggitarius A black hole. Scientists seek to prove that event horizons do exist in black holes.

See, an event horizon is not only “the point of no return”. It works as a sort of “border” for the black hole. It is the exact point where the gravitational pull is so immense, that light itself does not escape it, hence the reason why black holes are always dark, or almost invisible. With that logic, we can definitely say that we have no idea what a black hole truly looks like.

Thus, development has begun on the Global Event Horizon Telescope (EHT), a worldwide effort that is estimated to have 1,000 times better resolution than the Hubble telescope when it is completed.

According to the US National Science Foundation, it will be the first instrument of its kind. The outcome is looking good already; in a preliminary experiment, by combining the SPT [South Pole Telescope] at the NSF South Pole research station and the APEX telescope in Chile, located nearly 5,000 miles away from each other, another black hole was spotted in the Centaurus A galaxy, somewhere 10 million light years away.

The telescope will be created by connecting telescopes across the globe. According to Dan Marrone, an assistant professor in the University of Arizona’s Department of Astronomy and Steward Observatory,

“Now that we’ve done VLBI [Very Long Baseline Interferometry] with the SPT, the Event Horizon Telescope really does span the whole earth, from the Submillimeter Telescope on Mount Graham in Arizona, to California, Hawaii, Chile, Mexico and the South Pole”. 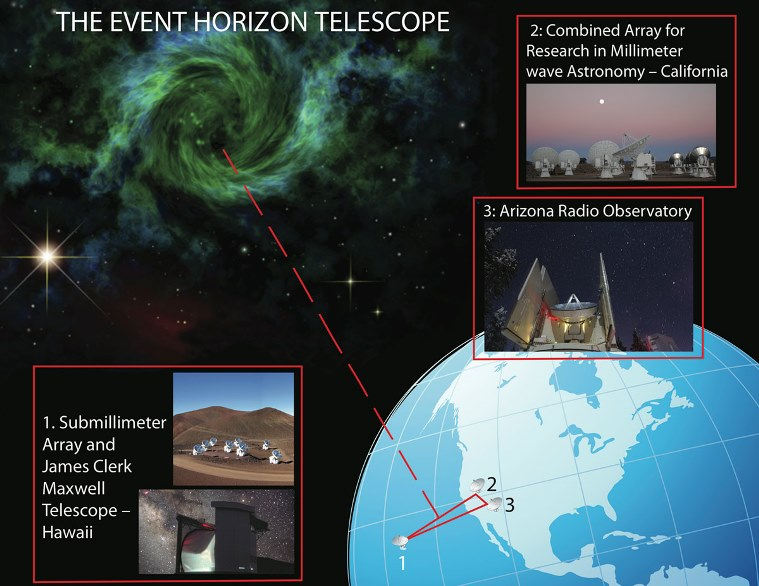 It looks like soon we will be celebrating another breakthrough in the field of understanding how the Universe works.

Bonus fun fact: Apart from the supermassive black hole at its center, our Milky Way galaxy is home to 25 other smaller, regular black holes.

Sofia Papadima, LL.B.
Contributing writer at Learning Mind
Sofia has a bachelor's degree in law. She is moonlighting as a writer and aspiring to one day gather enough experiences and turn them into ink and paper. The intricacies of the human mind and its peculiar ways have always fascinated her and urged her to explore more,not only humans but humanity as a whole, hopefully leading her to interesting findings. She is a literature, music and movie geek to boot.
Latest posts by Sofia Papadima, LL.B. (see all)