Even today, there are many educated people who mistakenly think that features of the subtle body like chakras or acupuncture points have “eluded scientific detection” by Western cultures.

Like many incorrect beliefs concerning “what science has found or not found,” it is based on the false premise that many scientists have been diligently looking for the thing in question using a very broad array of scientific tools. This is rarely the case except for the most beloved and/or profitable of scientific theories.

But funding has occasionally been found for the investigation of mysterious or publicly doubted phenomena, and a diligent search has occasionally been done by those with open minds and an utmost proficiency in their field. Such was the case with these two ongoing experiments, one recent and another decades in the past.

Both found ways of viewing some of the undulating structures of the human energy field, yet neither received the publicity and support needed to become wide public knowledge.

They examined a specific acupuncture point with various ultrasound vibrations until eventually finding a particular frequency range that was absorbed or deflected by the human body, especially at acupuncture points.

Their ongoing research came to have a team of collaborating scientists and college students assisting in the experiment, particularly with the task of running an array of 100 ultrasound transducers, with 101 computers processing data (the entire array generated one terabyte of data per 6 seconds of use).

They also examined their human research participants using fMRI to study the brain’s response to acupuncture needles, observing how the participants’ brains responded to the stimulation of an acupoint that TCM said pertained to vision.

They also tuned their ultrasound transmitters to a frequency capable of stimulating the acupoints in the same way an acupuncture needle does. Every bit as interesting were the images they generated of the acupoints, according to how the acupuncture points either absorbed or reflected ultrasonic vibrations.

The researchers also found that these attenuating structures changed shape and location in some sort of biorhythm, in the same way that acupuncture practitioners said that they should. 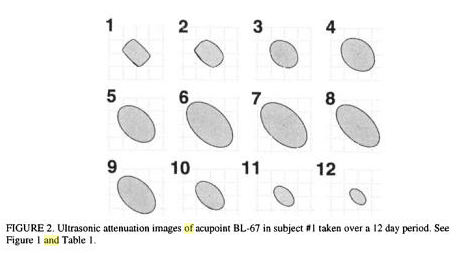 As an aside, seeing as how Joie Jones was nationally sought in his field, held multiple patents on ultrasound imaging innovations, and was a science advisor to two presidents (and one United Nations panel), I have a high level of confidence in his abilities.

Back in the 1960s, the pioneering biophysicist Robert O. Becker had no ambitions to explore the physiological basis of acupuncture, but he was asked to do just that when someone from the Army Surgeon General’s Office came knocking at his faculty office.

The man said that they knew it was effective for pain control, but until they knew why they could not consider it for full battlefield use by medics. In that time, acupuncture was suddenly a fresh topic to Western science media and grants were available to explore – or perhaps disprove – this foreign practice.

Other researchers of his time expected acupuncture was just an old superstition that would be explained away as the placebo effect, and they designed their experiments accordingly.

Meanwhile, Robert Becker approached the topic from the perspective of his field, taking a “hard science” approach by examining whether acupoints themselves were in some way visible to the diagnostic techniques of biophysics.

He teamed up with a highly capable young biophysicist named Maria Reichmanis, and with her mathematical giftedness and their combined ingenuity they made quick headway.

Each acupoint had an electric field surrounding it, as shown in the skin conductivity maps below, a field that varied in strength according to a 15-minute rhythm.

It would also vary in its shape in a manner I find quite in agreement with various spiritual groups’ descriptions, and the scientific work of later years such as the Jones & Bae experiments. 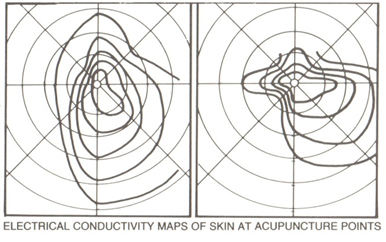 Becker and Reichmanis diligently investigated the properties of the points they studied, and in a particularly pivotal experiment, they planned to record the fields of multiple acupoints along a meridian line while stimulating the acupoint furthest away.

But right then the NIH canceled their grant, even though they had published four papers in a year.

Thankfully, while it doesn’t show the same level of detail as Becker’s work, the Jones & Bae study did examine the movement of chi between acupoints (or the “signal propagation” in the language of the study). Shown below is only a visual representation of their data, not a literal image of the acupoints’ locations in physical space along the meridian.

Discoveries like these lay in many corners of science. Sometimes they are ahead of their time and then forgotten, other times they are simply not communicated well to other interested parties, such as fellow scientists in neighboring fields.

A video of the presentation of the Jones & Bae study can be found below, from a conference of the Society for Scientific Exploration (though the study was published in the proceedings of the national academy of science). Joie has a great story to tell at the end of the video about the special challenge they had when publishing their work.