Until the early twentieth century, electricity remained a product of scientific curiosity in the eyes of ordinary people, just like the Large Hadron Collider is now – nothing more than a toy to entertain a handful of physicists.

Nikola Tesla was probably the most prominent of those scientists and inventors who with his pioneering work made electricity inseparable part of our lives. Some of his inventions, such as Nikola Tesla’s Death Ray, were surrounded by mystery.

During his long career, Tesla received over 111 U.S. patents and approximately 300 in other countries. Trying to improve the Edison light bulbs, the great Serb developed neon, and even fluorescent light bulbs and switched them on from the distance via electrostatic waves.

The invention of radio-controlled cars put him among the pioneers of robotics. According to some reports, he even managed to get the first x-rays in 1896, almost simultaneously with Conrad Roentgen.

At the threshold of World War II, Nikola Tesla suddenly announced to the world to have designed weapons to end all wars. He referred to “peace rays“, which, like the Great Wall of China, could protect the border of any state.

Ironically, the newspapers gave another name to the new invention. On July 11, 1934 the newspaper The New York Times put the following headline on the front page: “78-year-old Tesla discovered death rays!”

According to the scientist, the idea was about creating a stream of particles of such power that could bring down a fleet of 10,000 airplanes at a distance of 300 km.

Unfortunately, Tesla has never presented any evidence of his invention, although he argued about it for the rest of his life. The legend of Nikola Tesla’s Death Ray long outlived its creator.

Throughout the Cold War and after it, there were reports that one or the other superpower created death rays, which can hit any target at a great distance.

It is not surprising that Nikola Tesla was the inspiration of many mad scientists from the James Bond films, who locked in their secret laboratories and worked on a deadly weapon, with which one can conquer the world, or at least destroy the UK.

The great inventor indeed had two secret laboratories. In 1899, Nikola Tesla organized a laboratory in the U.S. state of Colorado to study the secrets of high-frequency electricity.

It is a recognized fact that as a result of one of his experiments, the inventor was able to create a 30-meter electric arch between two metal rods. The generator couldn’t handle such power and the entire town of Colorado Springs was plunged into darkness.

At the same place, Tesla made his most remarkable discovery, according to his opinion. He revealed the existence of terrestrial stationary waves, using which it was possible to conduct electrical energy through the Earth itself at certain frequencies. Thanks to them, the scientist managed to light 200 lamps without wires from a distance of 40 km.

The second secret laboratory appeared much later on Long Island, not far from Tesla’s house in Manhattan. Its most remarkable spot has become a giant wireless telecommunication tower with which the inventor intended to transmit energy across the planet to make “the entire globe tremble.”

According to one version, the famous Tunguska event occurred as a result of one of Tesla’s experiments in his laboratory on Long Island.

Many have heard about the so-called Philadelphia Experiment, as a result of which a ship was said to have disappeared and then materialized in a completely different place.

According to another, more realistic, version, it was much more trivial – the ship simply disappeared from the radar screen. Modern technologies allow doing this, such as using special coatings made of Kevlar, which absorb electromagnetic energy, making objects invisible to radar.

Many associate the Philadelphia Experiment with the names of Nikola Tesla and Albert Einstein, primarily because of the famous photograph taken in New Jersey on April 23, 1921, in which both men stand beside during the opening of a new transatlantic radio station. 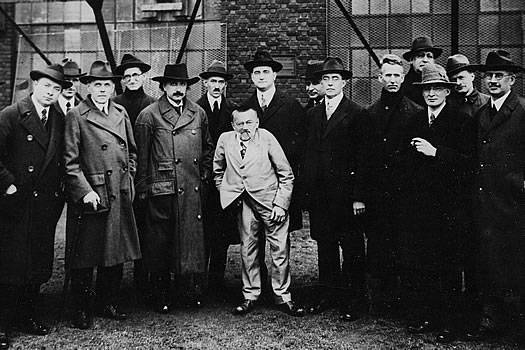 However, in fact, the two geniuses never had a close relationship. Also, there is no evidence that could suggest the involvement of Nikola Tesla in the Philadelphia Experiment, although the great Serb worked on improving the radar in 1903 and later.

As you can see, Nikola Tesla’s Death Ray and other experiments paved the way for numerous myths and misconceptions. Tesla was indeed an eccentric person and scientist who was far ahead of his time, so it’s no surprise that his work was misunderstood and misinterpreted.

Featured image: Nikola Tesla in his laboratory in Colorado Springs around 1899