Have you ever wondered what a brain on LSD looks like?

Last April, crowdfunding started on the science website Walacea. The fund was set up for research looking into the psychological effects of LSD on the brain through an MRI scanner. The research was conducted by Prof. David Nutt, Robin Carhart-Harris, and Amanda Feilding.

Recently, the research was finally published a year after the crowdfunding started, and the results are really exciting. David Nutt was the former government advisor for drugs; however, he was sacked in 2009 for the criticism that cannabis laws had gotten too tough in the UK.

This makes the study even more exciting as this is a journey taken by three scientists that many others feared to take since there was possible ridicule or a loss of job for undertaking such a controversial topic. Still, it was viewed by everyone involved to be an important piece of research as it may in the future help us understand more about the brain and how it works.

Detachment from the Ego

The effects of the psychedelic drug are highly notable – what is particularly noticeable in the brain on LSD is the dissolution of the ego. Those who take LSD start to feel detached from themselves and reality itself. Seeing how the normal self is disrupted teaches us more about the human experience and shows what we are missing out on within daily life as our normal brain functioning dulls down our consciousness.

The results from the study show us that LSD activates all regions of the brain. Moreover, when under the use of LSD, brain regions which are usually separate from each other start signaling each other to produce some intense effects, such as the bright and vivid hallucinations.

20 healthy volunteers were recruited for the study; these lucky people were part of groundbreaking research within this area of neuropharmacology. On one day, they were injected with LSD – 75 micrograms – and a placebo on the next day. Below, you can see the results of the MRI scanning and find out what is actually going on within the brain on LSD. 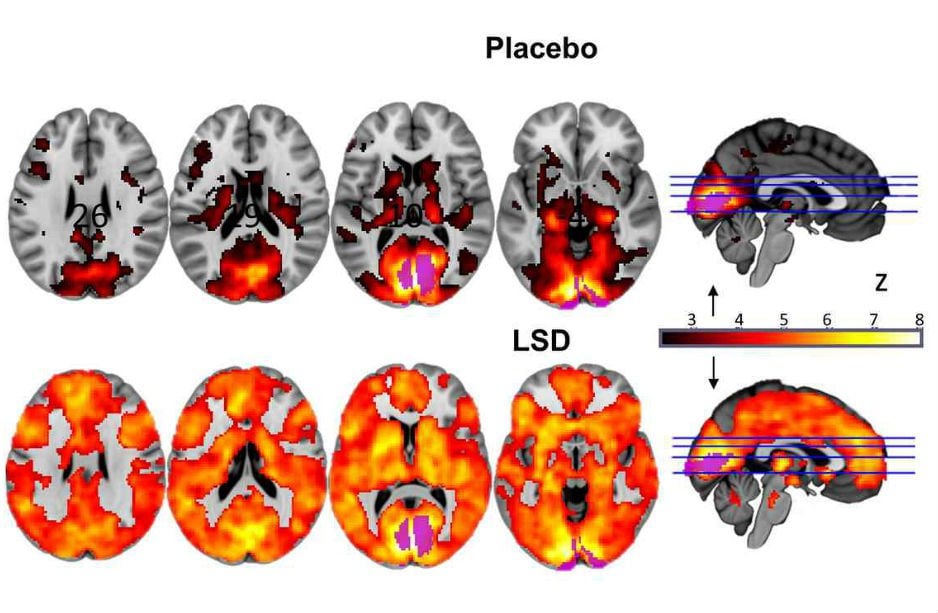 More specifically, it was found that the visual processing was no longer restricted to the visual cortex, which means other brain regions could contribute to what the participants were seeing, despite having their eyes shut. This is why people who take LSD feel a sense of oneness with the universe and a loss of their connectivity with their self, or the ego dissolving that we previously talked about.

Thus, these results demonstrate that there are lots of potential applications such as treatment for depression, alcoholism, and other illnesses which involve the brain.