Why don’t people like me? I believe each of us has asked ourselves this question at some point in our lives.

Being accepted by others is a natural human need. Even if you no longer care about social acceptance that much, you most probably did when you were a teen and a young adult.

Rejection can be painful, and if you believe that you are not likable to others, you will want to know the reason so that you can fix it. You may start to think that there is something wrong with you.

But I’m here to tell you this: if people don’t like you, it’s not always a bad thing. In fact, there may be some reasons behind it that reveal powerful qualities of your personality.

‘Why Don’t People Like Me?’ 6 Powerful Personalities That Often Get Rejected

1. You Are an Introvert

This is not to say that introverts are not likable, so don’t beat me just yet. 🙂 However, it’s true that people tend to underestimate the good qualities of introverts.

Why don’t people like me? This is what I often asked myself as a teen introvert.

The problem is that the ‘show and tell’ approach is favored not just in schools but in our society in general. Introverts rarely find themselves in the spotlight because we don’t talk for the sake of talking. We open our mouth only when we have something meaningful to say. Neither do we open up to people easily. You will never find an introvert sharing the story of their life to someone they just met.

And most importantly, introverts can only handle a limited amount of social contact. Too much interaction leads to emotional exhaustion also known as the ‘introvert hangover’. We will withdraw and may not pick up your calls or accept your invitations for some time.

These introvert behaviors are often misunderstood and lead to numerous misconceptions about this personality type. We are mistaken for being conceited, rude, or just plain antisocial. For this reason, many people don’t like introverts and favor more open and easygoing folks.

However, if people don’t like you because of your introversion, you should never forget that there is nothing wrong with you. Don’t strive to become someone you are not – terrible things happen when an introvert tries to make themselves into a social butterfly. Forced communication will only bring you unhappiness and overwhelm.

If you are an introvert, be sure that the right people will like and appreciate you. They will want to get to know you on a deep level. And this is much more powerful than being liked by everyone.

2. You Are Outspoken and Blunt

Just like our society doesn’t value introversion, it doesn’t value honesty. Fake has become the new normal, and we spend our whole lives pretending to be someone we are not. Modern society has become so fake that people get offended by the truth, and innocent words or behaviors are taken as insults. So it makes sense why people don’t like those who are not afraid to speak the plain truth. Those who call things by their proper names. Those who refuse to participate in this never-ending game of hypocrisy.

If you are a blunt person, you won’t waste your time on meaningless chitchat, vain pleasantries, or fake compliments. You will only say the things you truly mean. You will want to get to the point without following the unwritten social protocol and giving pointless answers to pointless questions such as, ‘How are you?’ or ‘The weather is nice today, isn’t it?’

This is because as an outspoken person, you know the real value of words. You know when someone means what they say and when it’s just fake nicety. So when you are dealing with a hypocrite, you prefer to skip the pseudo-polite introduction and get to the point. Why? Because you know that in reality, they don’t care how you are.

So if you are this kind of person, people may not like you because of your raw honesty. They may not appreciate you telling them uncomfortable things or just the fact that you refuse to play the nicety game we all unwillingly participate in.

No matter what, keep speaking the truth. It’s much more valuable than social approval. Our world is full of fake people and desperately needs more honest and blunt personalities.

This quote by Bob Marley sums it up perfectly: 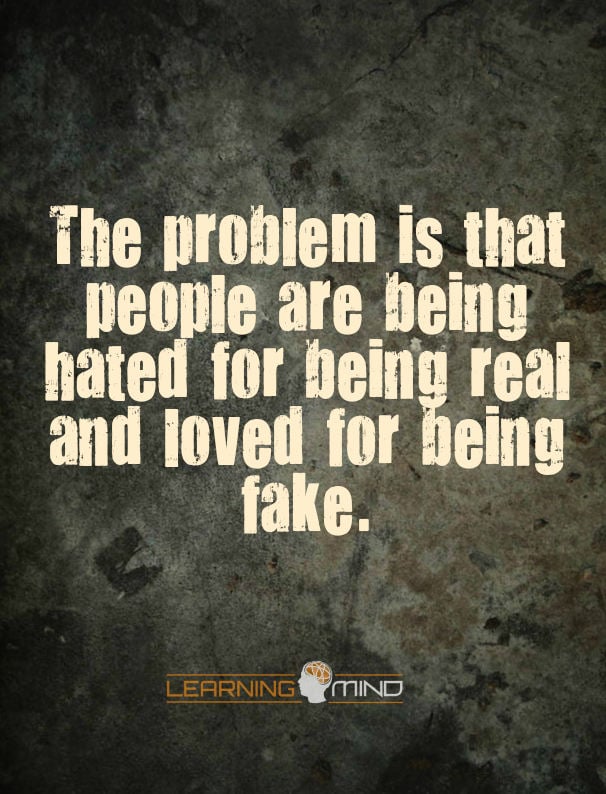 3. You Have a Strong and Independent Personality

Strong personalities are often intimidating. So if you wonder, ‘Why don’t people like me?’ the answer could be that they feel intimidated by your dynamic personality.

If you are a mentally tough person, you believe that when hardships knock at your door, it’s time to act rather than to give in to complaining or blaming others. This is because instead of dwelling on failure, you prefer to focus on working out a solution.

You always take full responsibility and expect others to do the same. When they are trying to avoid it with excuses, you may become pretty harsh with them. For this reason, you may come off as insensitive because you don’t tolerate drama and moaning.

Strong people also tend to hide their emotions as they often regard them as a weakness. They may be quite guarded and avoid opening up to others easily. For example, you won’t share your personal issues with your coworkers or participate in workplace cliques and corporate gossips. Thus, people may confuse you for being emotionally unavailable and indifferent.

Being strong also equals being independent, which includes knowing who you are and feeling no need to prove anything to others. Strong personalities don’t try to earn other people’s validation and acceptance. While this attitude is powerful, it can be easily misunderstood and push people away.

It’s natural for human beings to like and trust what is familiar to them. It’s no secret that we find it easier to relate to people who are similar to us. For this reason, those who live unconventional lifestyles, have unusual looks, or most importantly, think in a different way often get rejected.

Why don’t people like those who are different? Because at the subconscious level of our minds, we associate familiar with safe. That’s why normal (aka ordinary) tends to be perceived as good. So if you feel that people don’t like you, your unconventional way of thinking could be to blame. Maybe some of your ideas or views are too uncommon and scare people away because they can’t understand or relate to them.

But there is also another aspect of being a non-conformist. It could be that you refuse to conform to other people’s expectations of you. You know what you want and don’t let anyone take advantage of you. It’s the opposite of being a people-pleaser. Thus, if people don’t like you, it could be because you are not convenient for them. And it’s a good thing.

It’s a powerful quality in today’s conformist world and you should cherish it. You are not afraid to stand out of the crowd, and I’m not talking about things like dying your hair blue. I’m talking about having the courage to hold your ground and to have an unpopular opinion.

5. You Have Strong Integrity

Sadly, integrity, strong ethics, and conscience seem to be the things of the past. In a society built on greed, selfishness, and hypocrisy, being a person with a sound moral code can be a real struggle.

When you refuse to tolerate certain behaviors or to take advantage of others, you choose a difficult path. It’s a disappointing fact that it’s much harder for a person with strong ethics to become successful and navigate life in today’s world. They won’t act according to what’s convenient but will always follow their set of principles, even if it means making unfavorable decisions.

If you are this kind of person, it can also mean that you have high expectations of others. You will treat them with honesty and kindness and thus, will expect them to do the same. Unfortunately, this is not always the case. When others lie to you or try to use you for their purposes, you will not tolerate their behaviors. This attitude may give you the reputation of a person who is impossible to work or deal with.

And this could be the reason why people don’t like you. Remember, no one likes inconvenient people. But at the same time, they are much more difficult to take advantage of.

6. You Are Highly Intelligent

Intelligent people often feel misunderstood and rejected. Even the greatest geniuses in history had to go through this, including Nikola Tesla and Albert Einstein. Here is another quote that demonstrates the reason why intelligent people face social rejection: 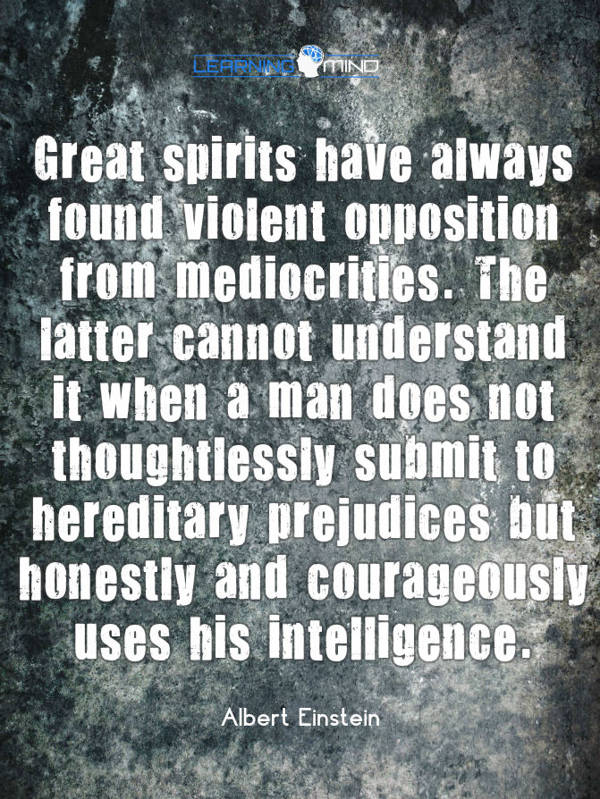 Great spirits have always found violent opposition from mediocrities. The latter cannot understand it when a man does not thoughtlessly submit to hereditary prejudices but honestly and courageously uses his intelligence.

Oftentimes, highly intelligent people are quite eccentric and lack social skills. They are deeply passionate about the specific niche of their interest, which may be unpopular or difficult to understand for those around them. This is what I call ‘intellectual loneliness’. It’s when a highly intelligent person feels alone because they struggle to find someone of a similar intellectual level to discuss their ideas with.

They also don’t easily conform to the unwritten social rules and want to delve into the essence of things instead of settling for superficiality. For all these reasons, highly intelligent people may encounter social rejection.

But why don’t people like them in the first place? Because their intellect is intimidating. After all, no one likes to be challenged or feel intellectually inferior. Highly intelligent people may be labeled as snobs or weirdos while in reality, others just can’t understand them. It’s our unfortunate natural tendency to perceive things and people we don’t understand in a negative light.

If People Don’t Like You, It’s Not Your Problem – It’s Theirs

When I was a teenager, I used to ask myself, ‘Why don’t people like me?’ It was only years later when I realized that the wrong people didn’t like me, but the right ones always did.

If you feel like no one likes you, the truth is that most probably, you just haven’t found the right people yet. So instead of trying to get social acceptance, put effort into these two things: 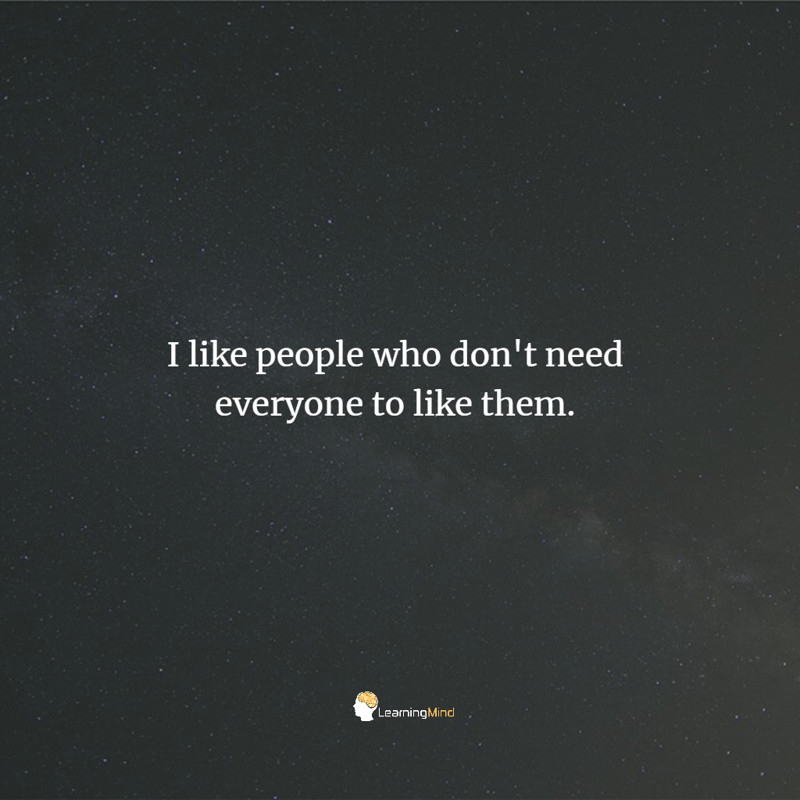 If you can relate to the above, it means that you have powerful personality traits that may push people away. It also means that there is nothing wrong with you. Quite the opposite is true – there is something wrong with our society that discards such personalities because they refuse to adopt its shallow values.

Keep cherishing your unique qualities and focus on finding your tribe rather than on being liked by everyone. It’s impossible anyway. Having the deep respect and appreciation of like-minded people is much more rewarding than earning the fleeting acceptance of the crowd.