If I asked you to name the smartest person who ever lived, you might say Albert Einstein, Leonardo da Vinci, or someone like Stephen Hawking. I’m pretty sure you wouldn’t know a guy called William James Sidis, and yet, this man had an estimated IQ of 250 to 300.

William James Sidis was a mathematical genius. With an IQ of 250 to 300, he was described by the Washington Post as a ‘boy wonder’. He read the New York Times at 18 months, wrote French poetry at 5 years old, and spoke 8 languages at 6 years old.

At 9 years old, he passed the entry exam at Harvard University. Aged 11, he lectured at Harvard at the Mathematical Club. He graduated sum Laude 5 years later.

But William never made a success of his incredible intellect. He died, a penniless recluse, at the age of 46. What happened to him, and why didn’t he use his phenomenally high IQ?

Here is the life story of William James Sidis.

William James Sidis (pronounced Sy-dis) was born in 1898 in Manhattan, New York. His parents, Boris and Sarah, were Jewish immigrants who had fled the pogroms in Ukraine in the 1880s.

His parents were equally intelligent and ambitious. His father attained his Bachelor’s and Master’s degree from Harvard in only three years. He went on to become a psychiatrist, specialising in abnormal psychology.

His mother was just as impressive. She was one of the first women to attend medical school at Boston University, where she graduated as a doctor.

To understand William, we have to examine the intentions of his parents. His parents were poor Russian immigrants, but within 10 years, Boris had attained a B.A, an M.A, and a Ph.D. in psychology. Sarah had her M.D in medicine.

His parents wanted to prove that if parents were swift enough and used the right methods, children could unlock their potential. In a way, William was their guinea pig.

Rather than nurture him with love, reassurance, and warmth, they focused on his intellectual side, and the publicity. His parents decided that when William was 5 months old, he should be treated as an adult.

He sat at the dining table and was included in all manner of adult talk, learning to use cutlery to feed himself. His parents were always around to answer his questions and encourage his learning. They didn’t need to. William found ways to occupy himself.

Experts have reverse-engineered Albert Einstein’s IQ – 160, Leonardo da Vinci – 180, Isaac Newton – 190. Stephen Hawking had an IQ of 160. So you can see that William James Sidis was an exceptional individual.

At 18 months old, William could read the New York Times. At 3, he was typing out letters to Macy’s to order toys for himself. Boris gave William calendars at the age of 5. Shortly afterwards, William could calculate the day on which any date fell during the past ten thousand years.

By the age of 6, he had taught himself several languages, including Latin, Hebrew, Greek, Russian, Turkish, Armenian, French, and German. He could read Plato in original Greek at age 5. He was writing French poetry and had written a novel and a constitution for a utopia.

However, he was becoming isolated within his family. William lived in his little world. While his intellectual needs were being fed, his emotional ones were not considered.

William also had press intrusion to deal with. He was frequently featured on the covers of high-profile magazines. He grew up in the media spotlight. When he did attend school, it became a media circus. Everyone wanted to know about this boy genius.

But William suffered because he didn’t want the attention. William loved rules and routine. He did not cope with deviations from his routines. At school, he had no concept of social interaction or etiquette. If he liked the subject, he could not control his enthusiasm. But if he didn’t, he would sulk and cover his ears.

William finished seven years of schoolwork in 6 months. However, he couldn’t make friends and was becoming a loner.

Between the ages of 6 and 8, William wrote several books, including studies in astronomy and anatomy. He also wrote one about the grammar for the language he invented called Vendergood.

At 8 years old, William created a new table of logarithms, which used 12 as its base instead of 10.

Set the Record for the Youngest Person to Enter Harvard University

Even though William had passed the entrance exam to Harvard at age 9, the university would not let him attend because of his age. However, after intense lobbying by Boris, he was accepted at this young age and admitted as a ‘special student’. However, he was not allowed to attend classes until he was 11 years old.

Rather than enter Harvard quietly and continue with his studies, Boris courted the press, and scrutinise what they did. Boris orchestrated what some saw as nothing but a publicity stunt. At 11 years old, William delivered a lecture on ‘Four-Dimensional Bodies’ to the Mathematical Club in January 1910.

William did indeed present his lecture. One evening in January, around 100 esteemed mathematics professors and advanced students crowded into a lecture hall in Cambridge, Massachusetts.

A shy boy of 11, dressed in velvet bloomers, stood up at the lectern, and awkwardly addressed the audience. He was quiet at first, but then, as he warmed to his subject, his confidence grew.

The subject material was incomprehensible to the waiting press, and most of the invited mathematical professors.

But afterwards, those who managed to understand it declared him to be the next great contributor to the field of mathematics. Once again, the press splashed his face across front-pages, with reporters predicting a bright future for this talented boy. 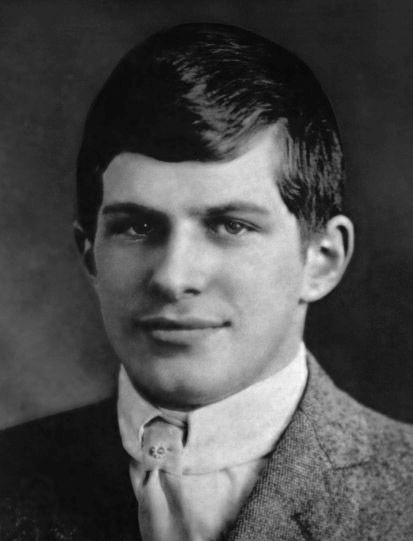 “He had been made a laughing stock at Harvard. He admitted he had never kissed a girl. He was teased and chased, and it was just humiliating. And all he wanted was to be away from academia [and] be a regular working man.”

The press clamoured for an interview with the child genius, and they got their soundbite. William declared:

William wanted to live a private life, but even so, he took a job teaching maths at Rice Institute in Houston, Texas. The problem was, he was so much younger than his students, and they did not take him seriously.

After that, William shunned public life, moving from one menial job to another. He managed to stay out of the public eye. But once he was recognised, he would quit and seek employment elsewhere.

He often took on basic accounting work. However, he would complain if someone discovered his identity.

“The very sight of a mathematical formula makes me physically ill. All I want to do is run an adding machine, but they won’t let me alone.” William James Sidis

William neglected his mathematical talents and retreated from public life. He hid away, preferring his own company. By the age of 20, he had become a recluse.

At age 39, William lived in a rundown, Boston rooming house. He worked as an adding machine operator and kept himself to himself. He occupied his time by writing novels under assumed names and collecting streetcar transfer tickets.

Finally, the press caught up with him. In 1937, the New York Post sent an undercover female reporter to befriend the reclusive genius. But the article, titled ‘Boy Brain Prodigy of 1909 Now $23-a-Week Adding Machine Clerk’, was less than flattering.

It portrayed William as a failure who had not lived up to his early childhood promise.

William was furious and decided to come out of hiding, into the spotlight once more. He sued the New York Post for libel in what is now considered the first privacy lawsuit.

William was a public figure and as such, had waived his rights to private life. After losing his libel case, William sank back into obscurity.

In 1944, he was found dead by his landlady, at age 46, of a cerebral haemorrhage. The mathematical genius was alone and penniless.

The case of William James Sidis raises a few issues, even today. Should children be subject to intense pressure at such an early age? Do public figures have a right to a private life?

Who knows what contribution William could have made if he had just be left alone?