Cats are considered by many as symbols of mysticism because of their elegant and flexible body, as well as their gaze that can “magnetize” anyone…

Indeed, as the recent scientific data show, there is another reason why cats have a title of ‘mysterious’ creatures. It’s all because cats see things we cannot see with our eyes!

Cats, like some other animals, have the ability to see psychedelic stripes on flowers or fancy patterns on the wings of birds, which are invisible to human vision.

The secret behind the supervision of our four-legged friends is the UV light. According to a recent study, cats, as well as dogs and other animals, can perceive this type of light that humans can’t.

“There are plenty of things that reflect UV radiation, which some sensitive animals are able to see, while we are not,” said Ronald Douglas, professor of biology of the City University of London and co-author of the study.

“For example, these may be certain patterns on flowers that show where the nectar is or traces of urine of an animal. Also, reindeer can and see polar bears as the snow reflects UV radiation, while white fur does not.”

Therefore, cats, dogs, and reindeer can detect with their eyes animals with white fur, while most people will only see… white snow.

Douglas, who specializes in optics, and Glen Jeffery, a neuroscience professor at the University College London, argue that cats, dogs, hedgehogs, rodents, bats, weasels, and the okapis can detect significant levels of ultraviolet radiation.

“For decades, we have known that many invertebrates such as bees see ultraviolet light,” continued Douglas, saying that even birds, fish, and some reptiles were recently added to the same list. 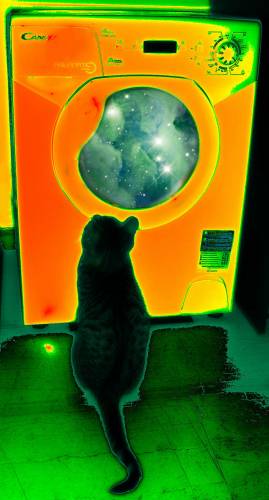 The professor explained that the visual pigments are those that absorb light and turn it into electrical activity, which, in turn, is transmitted through nerve cells. It seems that it is not always necessary for sensitivity to ultraviolet radiation. Instead, transparent parts of the eye such as the cornea and the crystalline lens in some animals transmit wavelengths of ultraviolet light.

This ability allows more light to pass to the retina, “something that would be very useful for a nocturnal cat“, he continued.

It could also explain why cats show so much interest in ordinary objects, such as a piece of paper. Sometimes chemical substances are added to paper, textiles, laundry detergents, shampoos, and cosmetics in order to make objects look brighter. Once these optical brighteners absorb the ultraviolet light, they may look different in the eyes of animals that are sensitive to UV rays.

Some people, for example, those who have undergone cataract surgery, also can see some of the UV light, but most cannot.

“We all know that ultraviolet radiation can be harmful,” said Jeffery in Discovery News. “I work a lot in the Arctic, where the UV radiation levels are too high as there is much snow and ice. The surfaces reflect 90% of UV radiation, with the result that animals are exposed to it. If you do not wear goggles, your eyes will hurt within the first 15 minutes.”

However, studies on reindeer have shown that repeated exposure to ultraviolet light does not bother them at all.

It is possible that cats, deer, and some other animals that can detect UV rays have a protective mechanism. Also, scientists believe that UV light tends to create more blur.

“Humans are good at one thing: they can see more details,” added Douglas and concluded: “Maybe that’s why we have a lens that ‘blocks’ ultraviolet light. If you do not have it, the world might appear more blurred.”