Ever wonder what resides in the farthest reaches of space? Well, it’s safe to say that the universe is immense, expanding outward into the never-ending reaches of the imagination.

Just when we think we have located the farthest point, we go even further. It seems that we will forever venture further into the unknown. Recently, however, we have found the farthest galaxy in our universe.

The galaxy EGS8p7 is a candidate for further inspection because of the data procured from the NASA Hubble Space Telescope and the Spitzer Space Telescope. The goal was to determine the Redshift, completed with a spectrographic analysis, at the W.M. Keck Observatory in Hawaii, of the distant galaxy.

Redshift is simply the results derived from the Doppler effect, which normally comes from the drop pitch in sound, but in this instance is produced from the drop in color- from bright color to a redder wavelength.

Redshift is normally used to measure distances to galaxies. This can be difficult, however, when viewing some of the most distant places-early galaxies. The reason for this difficulty lies with the absence of light during early creation.

The universe, immediately after creation, was filled with particles-electrons, protons and photons (light). In the earliest time, the universe could not transmit light. It took 380,000 years for the universe to cool and fill the universe with neutral hydrogen atoms. When this happened, the light began to travel across the universe. 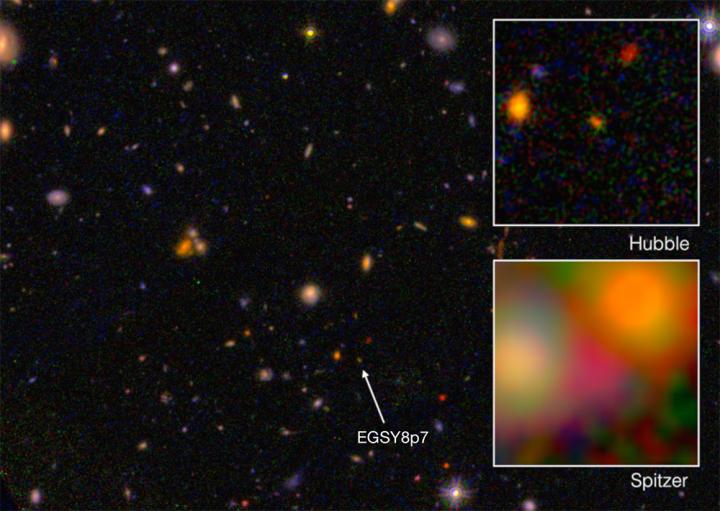 After the first billion years, neutral gas was re-ionized and remains this way to present time. Radiation was absorbed before reionization, which makes it impossible, in theory, to see EGS8p7.

With that being said, the Lyman Alpha Line, the spectral signature of hot hydrogen gas heated by new forming stars, should not be detected.

“If you look at the galaxies in the early universe, there is a lot of neutral hydrogen that is not transparent to this emission. We expect that most of the radiation from this galaxy would be absorbed by the hydrogen in the intervening space. Yet still we see Lyman-Alpha from this galaxy.”

This was found using the (MOSFIRE) spectrometer which captures, at near-infrared wavelengths, the signatures of stars and distant galaxies. One reason the Lyman-Alpha line is visible may be the fact that reionization didn’t occur uniformly.

“Some objects are so bright that they create a bubble of ionized hydrogen. The process is not coherent in all directions. We are currently calculating the exact chances of finding this galaxy and seeing the emissions from it. We need to know whether we should revise the timeline of reionization, which is one of the major questions to understanding evolution of the universe.”

A paper was authored by Ivo Labbe, Rychard Bouwens, Guido Roberts-Borsani, Daniel P. Stark, Pascal A. Oesch and Renske Smit. The research was conducted by NASA Hubble Fellowship, the Institute of Astronomy at the University of Edinburgh and the National Science Foundation.