We have learned from our early school time that the Earth has two motions: revolution around the Sun that takes 365 days 5 hours and 48 minutes (tropical year) and the Earth’s rotation around its own axis that takes 23 hours 56 minutes and 4 seconds (sidereal day), 24 hours (solar day).

However, Earth has other motions that are not well-known to the public. In this article, we intend to have a glimpse on some of these motions of the planet that we live on.

The motions of the Earth

Some of the additional motions of the Earth that have been discovered until now are the following:

In this article, we are going to take a closer look at these motions in more detail.

1. The precessional motion of the Earth’s axis

This motion is very similar to that of a spinning top in the Earth’s gravitational field. Besides its rotation around its own axis, the top’s axis also has a rotation around the vertical axis with a fixed frequency. This is called the precessional or wobbling motion of the top.

The same rule applies to Earth. The Earth is not precisely a sphere and owing to its rotation and the fact that it is not completely rigid, its shape has become more an oblate ellipsoid instead of a complete sphere. Indeed, the equatorial diameter of the Earth is 42 kilometers larger than the polar diameter.

As a result, due to the combined tidal forces of the Sun and the moon on the Earth’s equatorial bulge, and its inclined axis of rotation relative to its orbital plane, there is a periodic motion of the Earth’s axis with a period of about 23,000 years.

This has an interesting observable consequence. Although this motion is too slow to be discovered during our lifetime, yet, it is observable over long periods of time. About 5,000 years ago, the pole star was another star called Thuban (α Draconis) and not the present pole star (Polaris) that we see at nights.

The current angle of inclination that the Earth’s axis of rotation has in relation to its plane of orbit around the Sun is 23.5⁰. But careful observations by astronomers have made it clear that this angle is changing periodically with a period of 41,000 years from about 24.5⁰ to 22.5⁰.

This motion is primarily due to the gravitational attraction of the Earth by the Sun and the deviances of the Earth’s shape from a sphere. Interestingly, it has been found that this movement combined with the precessional movement of the Earth’s axis of rotation has been the major cause of the Earth’s periodic ice ages.

3. Ellipticity (eccentricity) change of the Earth’s orbit around the Sun (change of eccentricity or stretch) 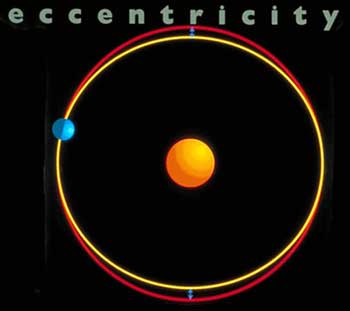 The Earth revolves around the Sun with a period of about 365 days. The shape of the Earth’s orbit around the Sun is an ellipse with the Sun at its center. This shape indeed is not static and the ellipticity of this orbit changes over time from a complete circle to an ellipse and back. The period of this motion is not constant and it ranges from 100,000 to 120,000 years.

4. Perihelion change of the Earth’s orbit around the Sun 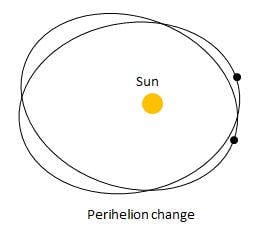 This motion is mainly due to the gravitational forces of other planets on the Earth. It leads to a regular change of the direction that the elliptical orbit of the Earth points to.

5. Change in the orbital inclination of the Earth 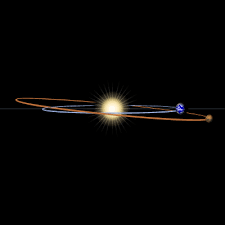 Although the above-mentioned motions of the Earth seem to be slight as compared to its two major motions; nevertheless, studies have proven that these periodic motions have significant long-term effects. Some examples of these efffects include the periodic climate changes on the Earth.

In 1941, Serbian astronomer Milutin Milankovitch managed to prove that the tilt change of the Earth’s axis of rotation, combined with its precessional movement, has led to many ice ages on the Earth.

Later studies confirmed his findings and now it is believed that from three to one million years ago, the period of ice ages was 40,000 years with an abrupt change from 20,000 years prior to that.

We do not feel the motions of the Earth because we move with it and their effect cannot be sensed in our normal life. But they are real, just not fully understood yet.