This story may sound incredible as it claims to give the answer to the question if we all could have a past life.

Have you ever experienced a déjà vu? If so, I would like you to imagine how odd it would feel if you could clearly remember things that happened thousands of years before you were born. That is exactly what happened to Dorothy Louise Eady, a British Egyptologist who claimed to be able to vividly recollect her past life.

This unusual claim has been regarded with a lot of skepticism, but the interesting part is that she had the knowledge nobody else did about the period of the Nineteenth Dynasty of Egypt. Her contributions to Egyptology are enormous, and yet, a veil of mystery surrounds this intriguing woman.

Dorothy’s life journey began in London, at the beginning of the 20th century, in 1904. Approximately, three years later, she had an accident that changed the course of her life. After falling down the staircase, she asked to be taken home.

It wasn’t until much later that she realized where the home was. She displayed strange and unusual behavior and Dorothy’s childhood was filled with incidents as a result of this accident. She was expelled from Dulwich girls school for refusing to sing a hymn which called on God to curse the Egyptians.

A visit to the British Museum helped Dorothy realize who she was and where her strange devotion to the culture of Ancient Egypt came from. During this visit, she saw a photograph of an Egyptian temple.

What she saw was a temple constructed in the honor of Setithe I, father of one of the best-known rulers in history Ramses II. 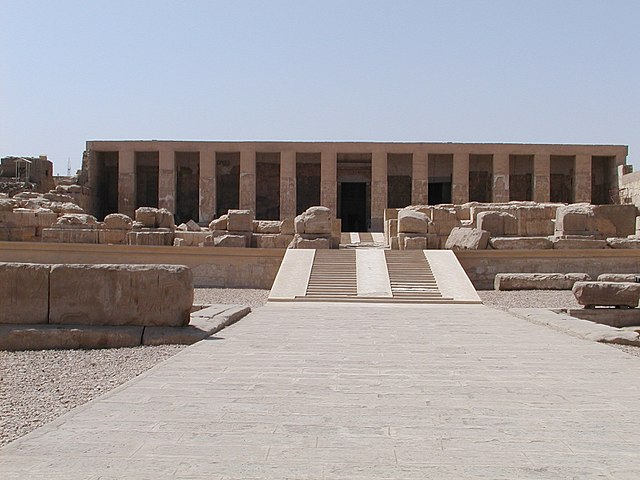 Her fascination with the collection of artifacts found in Egypt resulted in a friendship with Sir Ernest Alfred Thompson Wallis Budge, a famous Egyptologist who at the time was working at the British Museum. He encouraged her to learn more about the subject. Dorothy became a devoted student, she learned how to read hieroglyphs and read everything she could find on the subject.

Her interest in all things related to Egypt continued to grow over the years. At age 27, she was working for an Egyptian public relations magazine in London, where she wrote articles and drew cartoons. It is during this period that she met her future husband Eman Abdel Meguid and moved to Egypt.

The visions in which she saw the mummy of the mighty Pharaoh started when she was 15. Due to sleepwalking and nightmares that accompanied these visions, she was put into an asylum on several occasions.

Upon her arrival in Egypt, her visions intensified and over the course of one year, she claimed that Hor Ra told her all the details of her past life. According to this 70-page manuscript written in hieroglyphs, her Egyptian name was Bentreshyt which meant Harp of Joy.

Her parents were not of a royal or aristocratic origin. Her mother died when she was 3 and her father couldn’t keep her because of his commitment to the army. Bentreshyt was taken to the temple Kom El-Sultan, where she became a consecrated virgin at the age of 12.

She was on her way to becoming a priestess when Seti I visited the temple and soon enough they became lovers. A girl became pregnant after a while and she had to tell the High Priest her troubles. The answer she got wasn’t exactly what she had hoped for, and while awaiting trial for her sins, she committed suicide.

Dorothy’s new family didn’t look kindly on these claims, but the tensions between them loosened when she gave birth to her only son Sety. She got her nickname Omm Sety (mother of Sety) during this period. However, the difficulties in the marriage continued, and eventually, her husband left her.

The next chapter of Dorothy’s life is perhaps the most important because history remembers her for the work she has done during this period. After her marital life collapsed, she took her son and moved to Nazlet el–Samman, a village near the Giza pyramids. She began working with Selim Hassan, a well-known Egyptian archeologist. Omm Sety was his secretary, but she also created drawings and sketches of the sites they were working on.

After Hassan’s death, Ahmed Fakhry employed her for the excavations at Dashur. Eady’s name is mentioned in several books published by these scientists and her work was highly regarded, because of her enthusiasm and knowledge. She became more and more open about her religious beliefs and frequently offered gifts to the ancient gods.

In 1956, after the Dashur excavation was completed, Dorothy faced a crossroads in her life. She had a choice to go to Cairo and have a well-paying job or to go to Abydos and work as a draughtswoman for considerably less money.

She decided to live and work at the place where she believed she had lived in her past life, thousands of years ago. She had visited this site before, but only briefly and in order to display her formidable knowledge about the Temple of Seti, a temple in which she believed that Bentreshyt spent her life in.

Her knowledge helped considerably to unveil the mysteries of one of the most intriguing archeological sites in Egypt. The information about the garden of the Temple of Seti, Dorothy provided led towards the successful excavation. She remained at Abydos until her retirement in 1969, during that time she turned one of the chambers into her office.

The significance of Dorothy Eady

Nobody knows whether Omm Sety told the truth about her visions and her past life. It is possible that the entire story was just a way to cope with the fear of death and her need to believe that life is eternal. During her lifetime in the 20th century, she collaborated with some of the leading minds of her generation in the field of Egyptology.

Eady’s dedication to this subject led to some of the most important archaeological discoveries ever made. All of her colleagues spoke highly of her, despite her eccentric behavior and claims that seemed unlikely.

She was 77 when she died, and she was buried at Abydos. Maybe she reunited with her beloved Seti I in the afterlife, just like she believed she would. I would like to believe that she did.

If you would like to find out more about this remarkable woman, you can see a short documentary about her: