Have you ever heard about children who remember their past lives?

The notion that the soul is immortal is not unfamiliar to any religion we humans have ever invented.

Some religions, like Buddhism, place the idea of everlasting life at the center of their teachings, with everything else being just a mere consequence of this assumption. The interesting part related to our story is that the selection process of the new Dalai Lama is done after the death of the previous one and that all candidates are children.

A child who can recognize the objects that belonged to the deceased spiritual leader is named his successor. Reincarnation in its purest form, wouldn’t you agree? Buddhists are not the only ones who believe in the never-ending cycle of life and death, as a matter of fact, similar beliefs can be found on every continent.

In the last hundred years, many psychiatrists have researched the phenomenon of people who claimed to remember the facts from their past lives. In their studies, they have discovered that most of their subjects were children between the age of 3 and 7. Interestingly, most of the children forgot these memories in the same period most of us lose their early childhood memories, around the time we turn 6 or 7 years old.

So let’s take a look at some of the studies that claim that past lives and reincarnation are more than just stories from a religious book.

Hanan Monsur was born in Lebanon in the 1930s and by the time she was twenty, she married a policeman named Farouk. She gave birth to two girls Leila and Galareh. During the second pregnancy, Hanan experienced heart problems, but she decided not to listen to the doctors and became pregnant for the third time. In 1962, her third child came into the world, this time, a son.

During this period, she told her husband that she was going to be reincarnated and have lots to say about her previous life. A year later, her health condition worsened and she had to go through an operation. Hanan flew to Richmond, Virginia, where she died while recovering from the operation. Before dying, she tried to make a telephone call to her daughter Leila. She never reached her.

Ten days after Hanan died, Suzanne Ghanem was born. At the age of only sixteen months, Suzanne picked up a telephone and was constantly repeating ‘Hello Leila’. At the time her family didn’t understand what was going on, but as Suzanne grew, she was able to identify thirteen family members from her past life. The two families met and Farouk accepted Suzanne as a member of his own family. They were in contact for the rest of his life.

On a sunny day in 1968, a mechanic named Rashid Khaddege got into a car with his friend Ibrahim and went for a ride. They drove to the Military Beach in Beirut, but unfortunately, the driver lost control of the vehicle. Both men died on the spot. One year later, a boy named Daniel Jurdi was born. His first words were Ibrahim.

As a two-year-old Daniel repeatedly claimed that he wanted to go home, that his parents were not his real parents, and that he didn’t have a father because his real father was dead. He also claimed that his father’s name was Naim, as it turned out Naim was the name of the Rashid’s father.

While driving with his mother near the place where Rashid had died, little Daniel recognized the place and told his mother ‘This is where I died’. Years later, the two families met. Daniel recognized Rashid’s sister as his sister without ever seeing her before. He also knew that Rashid’s favorite fruit was a banana. Strangely enough, Rashid’s family had stopped eating bananas because it evoked memories of him. Daniel still has a car phobia due to his experiences in his previous life.

Perhaps one of the saddest stories we all remember from our childhood is Anne Frank’s story. An innocent young girl hiding from the Nazis in the attic for years, only to be captured and executed in the concentration camp. A horrible story that informed us of the horrors people had to go through during one of the most terrible wars in history.

As many of you know, Anne died in 1945 in the Bergen-Belsen concentration camp. Nine years later, a little girl named Barbo came into this world. As soon as she could speak, she started claiming that her parents were not her real parents and that she wasn’t in her real home. During that period, she had frequent nightmares in which men were breaking through the attic door. Barbo’s parents discarded these stories as fantasies. 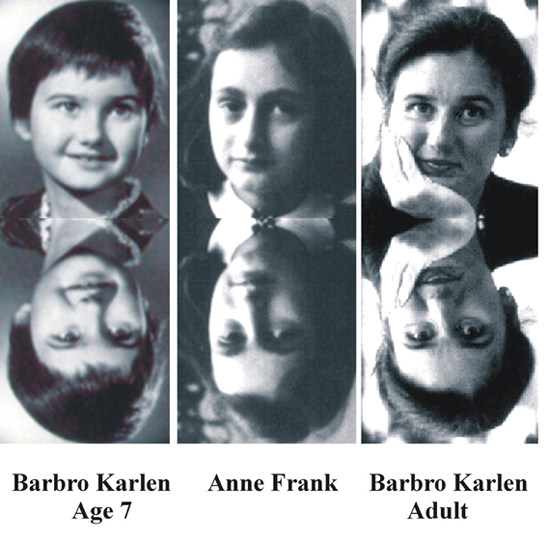 While growing up, Barbo realized that Anne Frank was a famous person and that sharing memories of her past life made people around her uncomfortable.

She decided to keep quiet until the age of ten. While visiting Amsterdam with her parents, Barbo was able to find Anne Frank’s house without any directions or help from anyone. To the amazement of her parents, she knew the inside of the house. Barbo took her parents directly to Anne’s hiding place.

Barbo Karlen has struggled throughout her entire life to overcome the phobias she got in her previous life. Can you imagine how horrible that must be?

Peter Teekamp didn’t accept the fact that he was the reincarnation of the famous painter until 2005. He was 55 at the moment, but strange experiences he couldn’t explain started when he was just a little boy. Without any reason, the words ‘Go Gone’ were often on his mind. Peter frequently used them as a cheer. A few decades later, Peter was able to associate them with the surname of the famous artist.

During his teenage years, Peter started drawing and developed an interest in the visual arts. His drawings from that period resemble Gauguin’s work, but Peter never had a chance to see the drawings produced by the French artist. As if Paul Gauguin was remembering his own work. Throughout his entire life, Peter experienced similar life situations as Paul did.

It was a long process of realization that the two men have more than just a few things in common. Being a painter himself, Peter’s work has striking similarities with Gaugin’s.

On May 1, 2000, a two-year-old boy was having a nightmare. In his dream, he was shouting ‘Airplane crash!  Plane on fire! Little man can’t get out!’  This boy’s name was James Leininger. His nightmares continued five times a week and every time he repeated the same words.

When his parents asked him who was the little man and who was trying to shoot his plane down, he replied that the little man was himself and that the people shooting at him were Japanese soldiers. He recognized the flag or ‘the big red sun’ as he described it.

All these unusual behaviors encouraged James’s parents to research a little about the Pacific war. While going through the section of a book about Iwo Jima, the child said that this was the place of his death in the previous life.

After years of searching for answers, James’s father found out that a pilot named James Huston belonged to the Natoma Bay unit and that he lost his life on March 3, 1945, during the battle of Iwo Jima. When confronted with pilots who witnessed the Huston’s plane go down young James was able to describe in detail what happened to the brave pilot.

Do you think that these and other stories about past lives are true? Do you have any idea why these lives are sometimes separated by only a few days and sometimes by several decades? Feel free to share your opinion with us in the comments.