Every snowflake is different, and yet, curiously the same. Why is this? Well, the fluffy edges and lengths are various, but each snowflake always has the same number of points.

As a child, I folded paper and used scissors to cut shapes off the corners of the folded paper. Then I would fold the paper again and cut more shapes from the new corners. After I was done, I unfolded the paper to reveal what looked like a snowflake. This one couldn’t melt, and it brought a huge smile to my face.

I think many children did this, and it was magical to them. Although I couldn’t hold the beauty of the snowflake in my hand during a snowstorm, I could keep these paper snowflakes as long as I wanted. Either way, I never got over just how amazing snowflakes could be.

The thing about snowflakes

Have you ever heard the expression “No two snowflakes are alike”? Well, it’s actually true. Every single snowflake has its own shape and size. The only similarity and I mean identical part of each snowflake, is the fact that they all have 6 points. Isn’t it remarkable how such unique forms of nature have such mathematical aspects? But you can only fathom this if you understand how snowflakes are formed in the first place.

Do you want to know how snowflakes form? Well, the short answer is that cold drops of water attach to pollen or dust in the air, which then forms a crystal. This crystal continues its descent until more water vapor attaches to the crystal and forms its unique shape – which pertains, basically, to the 6 arms of the snowflake.

Also, it is that the temperature, not the humidity governs how the snowflake is formed from the crystal. In 23 degree weather, the snowflake will have long pointed crystals while in colder temperatures, the 6 points of the crystal will be flattened. The truth is, a snowflake can change shapes all the way down, but it always retains 6 points. It all depends on the atmosphere. 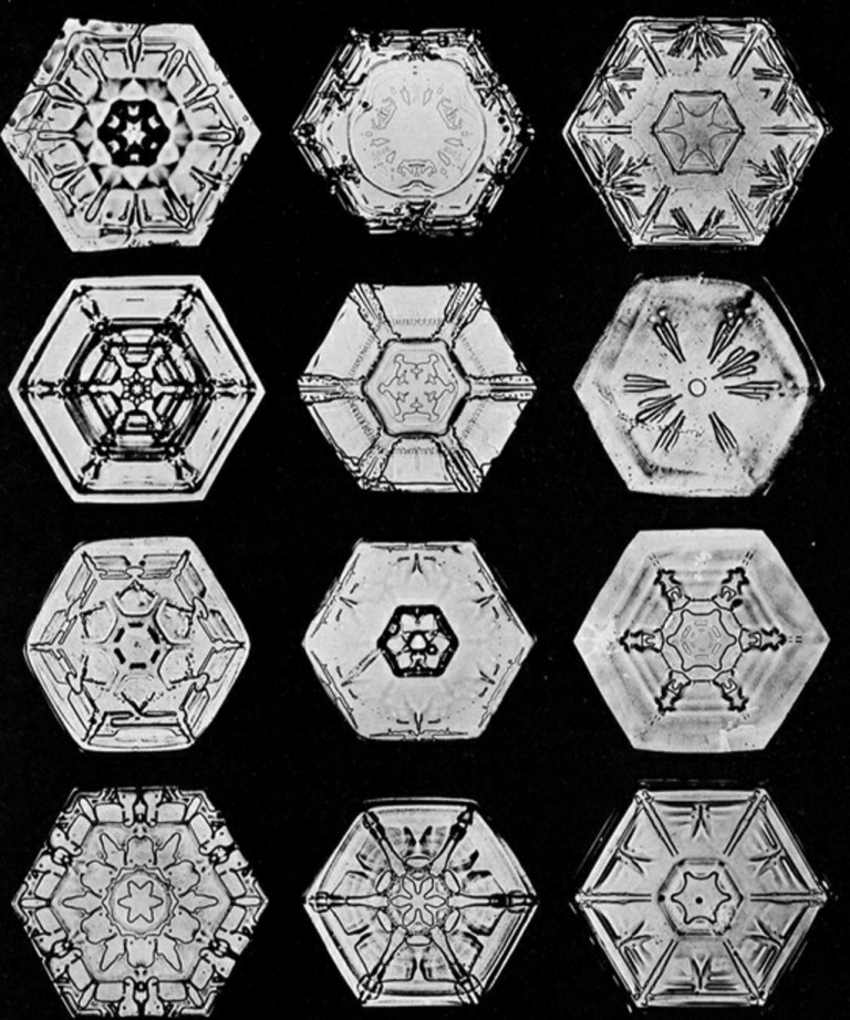 Capturing the snowflake under a microscope

In the 17th century, Johannes Kepler was the first to wonder why snowflakes formed the way they did. It wasn’t until two centuries later that a farmboy in Vermont, Wilson Bentley, used a microscope to discover more.

After Bentley’smother purchased him a microscope, he started gazing at everything from blades of grass to insects, but what stopped him in his tracks was when he caught a melting snowflake underneath the lens. He was amazed. 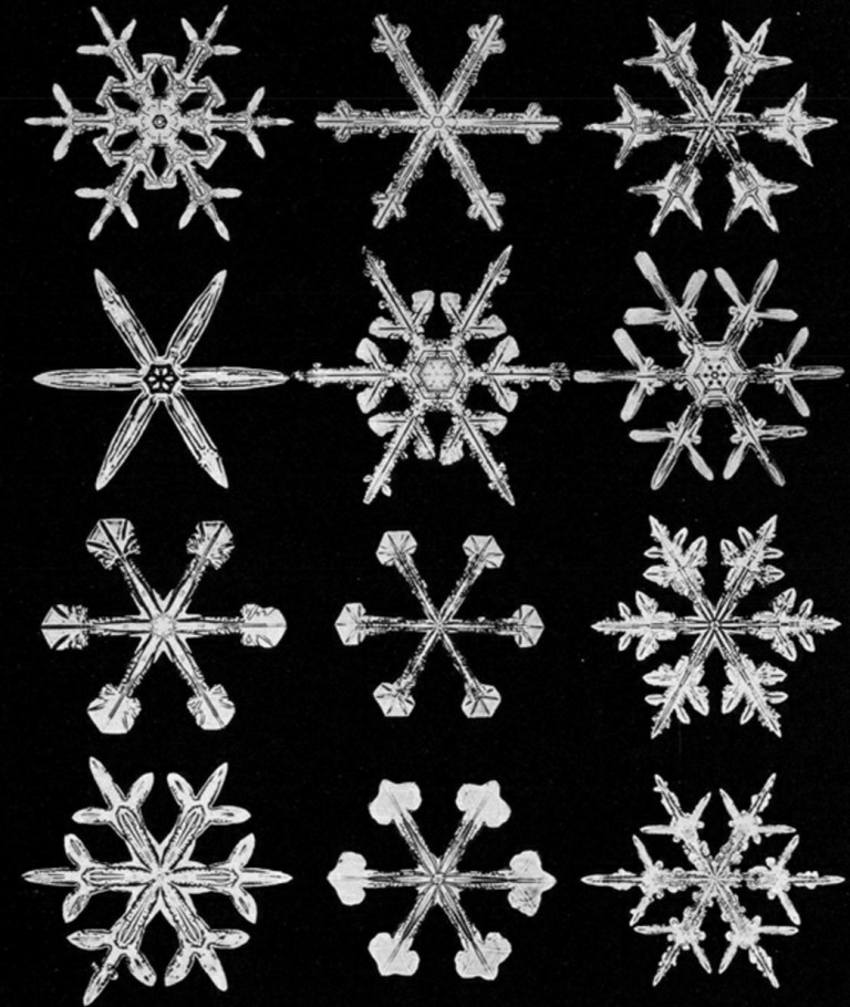 Of course, Bentley had to study his snowflakes in the coldest place he could find around his home. After some time, and despite his father’s irritation of him neglecting his farm chores, he received a camera. When he attached his huge accordion-like camera to his microscope, he captured the first photograph of the snowflake. This was on January 15, 1880.

Wilson Bentley took more than 5000 pictures of snowflakes over the course of 46 years. He examined each one carefully, admiring their intricate and unique formations.

Of course, after each photo was taken, the snowflake would melt away gradually, taking it’s tangible beauty away forever. If not for the images, we would never be able to see what Bentley saw in those many winters that he devoted his life to his passion. 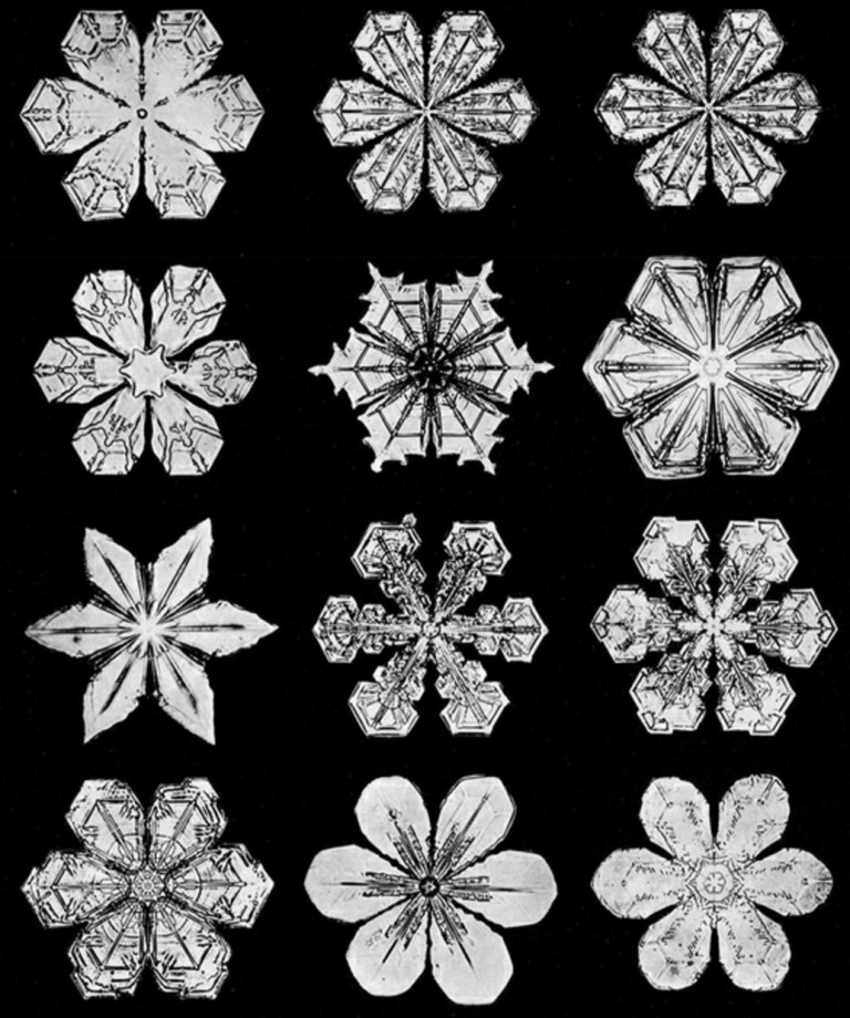 Bentley became known as the “Snowflake Man” to those who knew him and also in a 1998 biography written by Duncan Blanchard.

I may have cut out paper snowflakes as a child, but nothing rivals the real deal. I applaud nature’s art and hope you have enjoyed learning facts about the snowflake and how while vastly different, all retain 6 points of intricate beauty. Maybe we will see a few of them this year, and catch a glimpse of their magic before they fade away.