In short, the form of potential alien life would depend on the conditions which would exist on their planet.

On planets covered with vast oceans, life can exist in the form of water creatures resembling inhabitants of our marine environments. In a world with strong gravity and dense atmosphere large, strong, and most likely aggressive (due to the harsh conditions of life) creatures may be present. In icy worlds, perhaps only bacteria can potentially exist. To survive, they may be forming giant networks.

This term is a result of the assumption that alien life if it exists, must resemble Earth’s life forms. In particular, that is that basic molecules responsible for the metabolic chemical processes of life are represented primarily by carbon.

It is apparent that this form of life is the closest to us, therefore, it is extremely difficult for earthlings to imagine a different kind of biochemistry. We will not attempt to change these traditional views.

“Carbon chauvinism” limits our imagination about other forms of life, but, of course, does not prevent us from saying that Earth-like life forms do not exist somewhere else in the universe.

This is a joint project of the television Blue Wave Productions Ltd. and a team consisting of American and British scientists working together on a project sponsored by the National Geographic Channel. Aurelia and Blue Moon represent hypothetical examples of a planet and its moon, which could be home to extraterrestrial life.

The scientists suggest that planets like Aurelia could be discovered as soon as in about 10 years. It is highly likely that this planet would revolve around a red dwarf star.

After all, these stars are the most common (80% of all stars) and are relatively close (50 light-years away) to Earth (to detect planets at greater distances we would need to use more powerful telescopes which are not yet possible to build). Red dwarfs are cooler stars and produce less than a tenth of the light coming from our sun.

So, we have a red dwarf. Around it, we have a revolving planet similar to Earth called Aurelia. In order for liquid water, an indispensable attribute of carbon life form to exist on its surface, the planet must be located close enough to its star, even much closer than our planet. A red dwarf, as we know, is much cooler than the Sun.

Therefore, under strong gravitational force, this planet would not rotate around its axis and will always be turned with one side toward its host star. Thus, it would not be able to provide changes from day to night or seasonal changes.

But using the terrestrial weather model, scientists from the Met Office (UK National Weather Service) showed that liquid water can exist on a planet that does not revolve around its axis and located near the red dwarf.

The dark half of Aurelia would not be lit, and the temperature could not rise above zero. These would be very unfavorable conditions for life to exist. The lit half of the planet, according to the weather models, would have a permanent giant cyclone.

Hurricanes and torrential rains would occur without stopping. However, it could be that an area with a warmer and stable climate could exist between the dark and the stormy sides of the planet. Here, according to scientists, life is more than possible.

Rivers formed in the stormy zone would flow in this direction, so there would be a huge amount of water reservoirs.

What kind of life forms could be present here?

If we assume that the approximate age of hypothetical Aurelia is 5 billion years, then it could be home to the following forms of life. Chief among them would be Sting Fans. These bizarre creatures would resemble plants, but they would actually be animals that have learned to catch the daylight. They would be fighting for a place under the sun, the red dwarf.

Their planet could not rotate, so the fans would move by themselves in search of a better position. Sting fans could reach 10 m in height. Their wings would stretch towards the sun to get the energy for the production of sugar. Their simple in design hearts would transport nutrients through the body.

Think of similar life forms on Earth: corals, jellyfish, and some types of shellfish. They also live using other life forms; their captives carry out photosynthesis and produce the necessary energy. This is called symbiosis. 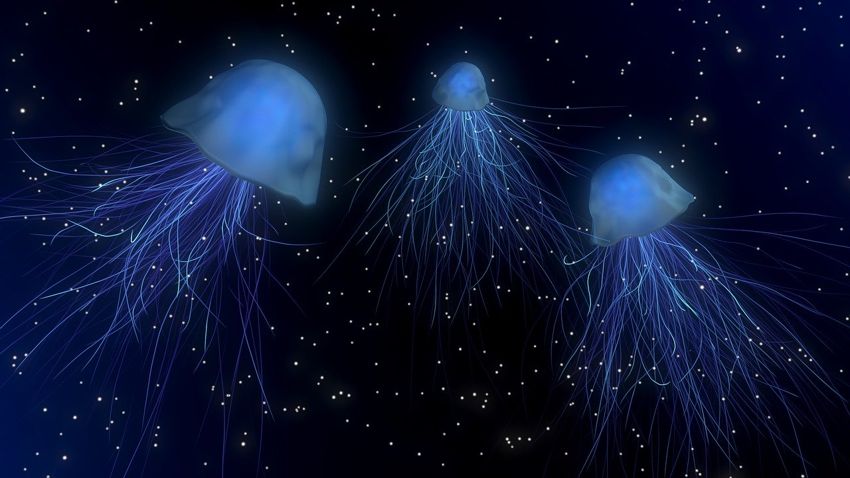 According to the world’s leading biologists and biomechanics specialists, Aurelia’s life would depend on Sting Fans. But there wouls also be other forms of alien life. For example, Cynodon species would be the largest predator on the planet. Cynodon would grow 4.5 m tall and would weigh as much as a buffalo. Cynodon species would completely resemble animals in their body structure.

Scientists who participated in the project suggest that “Aurelian” creatures would most likely follow the laws of biology, similar to the earth creatures.

Thus, it is logical for an Aurelian life form to have five senses and corresponding organs: eyes, ears, nose, skin, and taste sensors. All these organs must be situated on the frontal part of the body because the environment is perceived by animals from the front.

It would also be common for these creatures to have the brain or some type of a computing center located as close as possible to the sensors. The long neck would allow the body to remain motionless while this part of the body would move, hunting for prey. Intestines would take up a lot of space, but they must be contained in a stable location, at the feet, for example. Legs must be long enough to quickly chase the prey.

Living beings on Earth have chosen the same means of adaptation. There are not too many ways to swim or to move, and living creatures in the course of millions of years have adopted similar ways to move. According to scientists, it is probably going to be similar to other planets. The same process of evolution would create life forms on Aurelia.

The second hypothetical object of the study by leading experts is Blue Moon. It is a fictional natural satellite of Jupiter-type planets, almost completely covered by water and with a very dense atmosphere. These conditions allow scientists to suggest the presence of flying creatures comparable in size to a whale on this satellite.

Blue Moon should be comparable in size to Earth, but according to the model, its surface atmospheric pressure would be three times greater than on Earth. A characteristic feature related to the Moon would be the absence of polar ice caps. The dense atmosphere and ocean surface would reduce temperature fluctuations.

Excess oxygen in the atmosphere should theoretically lead to an increase in muscle strength of flying whales with a wingspan reaching 10 meters. Billions of floating algae and mosses are floating in this “air”. They would be the food source for the flying whales.

Most of the life forms on this planet consist of carbon, oxygen, phosphorus, and sulfur. But in 2010, scientists discovered organisms that do not require oxygen.

The most likely candidate for the role of a structure-building atom, according to alternative biochemistry, is silicon. It has properties similar to those of carbon. But silicon atoms have greater mass and radius, and they form double or triple covalent bonds in a more complex way.

This may prevent the formation of biopolymers (polymers comprising the organisms). And although the main hypothesis regarding the existence of non-carbon extraterrestrial life is based on silicon, this life would probably have much fewer varieties than carbon life. This is because silicon compounds may not be as diverse as carbon compounds.

But if this is so, then the silicon life form could be very different from familiar to us life forms, thus, we hardly have the opportunity to speculate what “silicon” alien life forms may look like.