Highly sensitive people are sometimes described as weak, thin-skinned, overly sensitive and sulky. They may be told to toughen up or get over it.

However, recent research has indicated that highly sensitive people, or HSP’s, actually have differences in the way their brain’s work. Their sensitivity is not a weakness or a choice, it’s just part of who they are. So it’s not really fair to use negative labels such as overly sensitive.

Researchers from Stony Brook University in New York and Southwest University in China used MRI scans to see what went on in the brains of HSP’s. They found that HSP subjects have greater activity in areas of the brain concerned with high-order visual processing.

Even more fascinatingly, they discovered that a significant percentage of dogs, fish, and various primates also display this sensitivity trait. Dr. Elaine Aron, a psychotherapist and researcher, estimates that 15-20% of people have what she calls Sensory Processing Sensitivity. These people have nervous systems that process stimuli intensely.

Despite high sensitivity being a recognized trait, HSP’s are still criticized for being overly sensitive. Here are five things sensitive people would like others to understand.

Our society may have decided that showing emotions and feeling things deeply is wrong, but that doesn’t mean it is. Sensitive people are self-aware and empathetic and these are great skills to have. 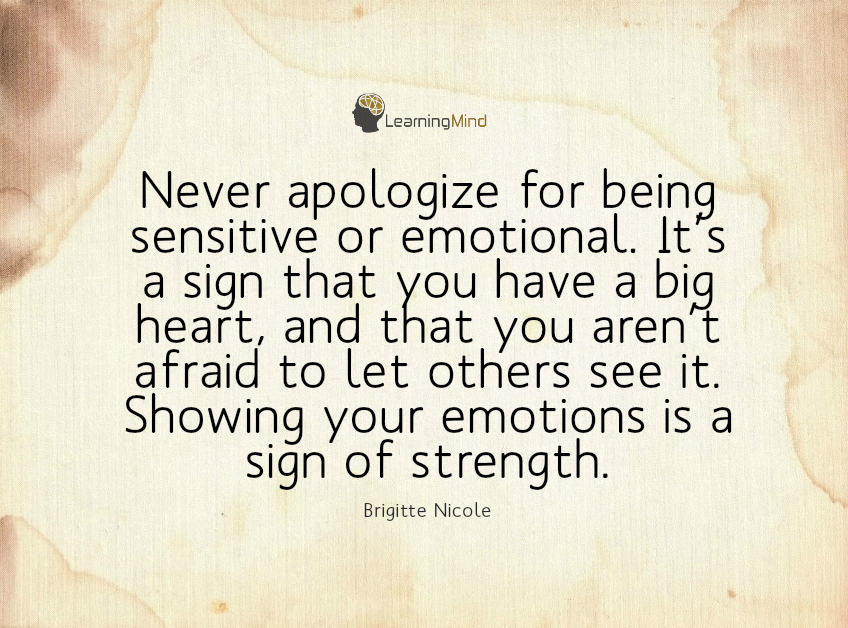 Never apologize for being sensitive or emotional. It’s a sign that you have a big heart, and that you aren’t afraid to let others see it. Showing your emotions is a sign of strength.
-Brigitte Nicole

Highly sensitive people are also often described as sulky. People accuse them of taking offense if they go quiet or remove themselves from the situation if they are criticized.

But this is not necessarily a sign of taking offense or sulkiness. It’s just that sensitive people often need time to think things through. They may be feeling hurt, but they also want to process information to see what might be true and what might not before they react.

Highly sensitive people sometimes are accused of attention seeking. This may be because they react quite strongly to certain things. If they get upset, or go quiet or do anything that shows a reaction, they may be accused of being dramatic. In fact, the last thing HSP’s usually want is attention.

Mostly, they would rather feel things less intensely as it is often very uncomfortable. What they really need is patience as they process things. Something that might be easy for a less sensitive person to deal with could be much harder for a sensitive person.

Often highly sensitive people need to spend some time alone to get a break from the intense reactions they get from a variety of stimuli. This does not mean that they are shy or hate people. It has nothing to do with how sociable they are. Sometimes they just need a quiet space, with few distractions to rest their over-stimulated nervous systems.

Highly sensitive people perceive things differently from others, but that doesn’t mean there is something wrong with them. They still deserve respect. Accusing someone of being overly sensitive or criticizing his or her sensitivity is disrespectful.

We are all different, but when we try to understand each other better, with patience and love, we can all learn from those with different traits from our own.

Describing someone as overly sensitive or too sensitive implies that there is something wrong with him or her. But there isn’t anything inherently wrong with being sensitive. In fact, it can be a gift.

Sensitive people are often empathetic, creative and artistic. Some have exceptional physical senses and can use these in fantastic ways, such as food critics, or perfumers. It can be helpful to the highly sensitive person to learn strategies that help them cope with their sensitivity.

However, the problems in society often begin when we expect everyone to fit into the same mold. It is often more helpful to accept ourselves and others with patience, learn to understand those who are different in some way and offer compassion rather than criticism whenever others are struggling.

Is there something you’d like others to know about your sensitive nature? Share your insights with us in the comments section below.