Do you like being alone? Not many people do.

A lot of people get scared of being alone or living on their own, but in reality, it can develop you as a person in a lot of different ways, as well as remove a lot of the worries that many people have.

This list puts together six of the most common things that people who like being alone just don’t have to deal with. We are pretty confident that this list is going to make you want to take some time for yourself, as well.

People who are alone a lot of the time are a lot more confident of themselves than others. They don’t feel the need to impress people, or worry about negative opinions. They are comfortable in their own skin and they are proud of who they are so they don’t need to focus on winning the positive opinions of others.

2. Having to prove themselves

People who like being alone don’t feel the need to put on a front to impress people. They know exactly who they are and they don’t go out of their way to make a good impression. People who enjoy solitude know that the most important people will like them for exactly who they are, so there’s no need to be someone that they aren’t.

3. Doing things they don’t want to

People who are often alone are used to doing what they want, when they want, and this makes them a lot less likely to be roped into doing something that they don’t want to do. They’re also very good at occupying themselves when they are alone rather than letting themselves stew in their own boredom. 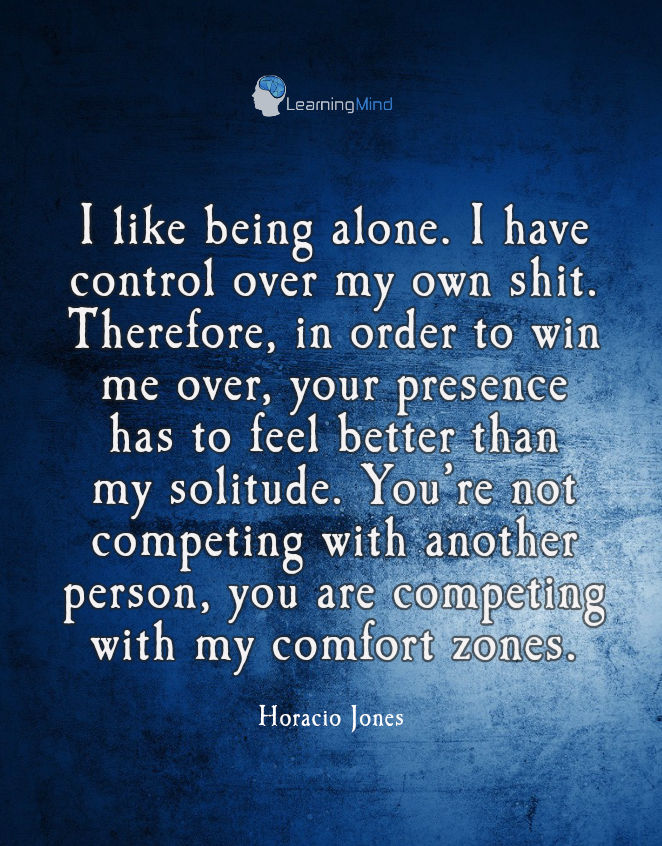 I like being alone. I have control over my own shit. Therefore, in order to win me over, your presence has to feel better than my solitude. You’re not competing with another person, you are competing with my comfort zones.
-Horacio Jones

Being on your own allows you to become much more comfortable in your own company, and this makes it much easier to relax about finding someone to be with. People who are often alone are much less likely to settle for a relationship that doesn’t totally satisfy them, and this makes them much happier in the long run.

When you’re used to being alone, your instinct as to what will be a fun evening gets much better. You can easily suss out what the best ways to spend your time are, and who the best company will be. Missing out isn’t an issue because you know whom you should go out with and where.

Rather than having to carve out time for themselves to get some space and clear their heads, people who like being alone have a lot of time to call their own, and can choose what they want to do and when.