Does the name Phineas Gage ring a bell? If not, but you are fascinated with the human brain, then sit back, relax and let me tell you this incredible story.

These days we know a lot about the human brain. For example, which areas are responsible for cognitive function or processing the senses. But back in the 1800s, it was a completely different situation. In fact, doctors would use phrenology (measuring bumps on the head) as a crude method of predicting mental illness. However, thanks to Phineas Gage and a tragic accident in 1848, all that changed.

The accident that changed Phineas Gage

By all accounts, 25-year-old Phineas Gage was an ordinary man. Hardworking and reliable, in 1848 he worked as a foreman of railroad crew. The crew were tasked with cutting a railroad bed into the rock for a new rail line in Cavendish, Vermont.

The work was not difficult, but not without danger. It consisted of packing explosives into a hole using a tamping iron then filling it with sand before standing back and detonating it. The crew were making good progress until a fateful day in September.

On the 13th September, Phineas Gage packed a hole as usual but was distracted at the last minute. Rumour has it that he turned away to look at his men and his tamping iron struck rock. This set off a spark which ignited the explosive. The force of the explosion sent the tamping iron clean into Gage’s head. 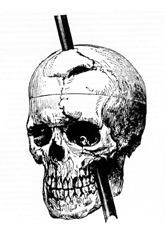 The tamping iron measured just over 3 feet with a diameter of 1.25 inches. It was a heavy beast as well, weighing over 13 pounds. This heavy piece of metal pierced Gage’s skull, just under his eye socket and out of the back of his head, taking parts of his brain with it. His colleagues immediately packed him onto a cart and speeded to a local doctor.

Gage was severely injured. However, he managed to joke to the doctor:

“Here is business enough for you.”

In other words, ‘This should keep you busy for a while’.

Phineas Gage is a changed man

The fact that Gage survived the accident is not the fascinating part of his story. It was the change in his personality and the implications doctors drew from his brain injury as a result. Gage’s doctor, John Martyn Harlow treated him for months afterwards.

Before the accident, friends and workers described Gage a “shrewd, smart businessman, very energetic and persistent in executing all his plans of operation” with a “well-balanced mind”. However, since the accident, many remarked that he was “no longer Gage”.

“A child in his intellectual capacity and manifestations, he has the animal passions of a strong man.” Harlow

Now, the once amiable Gage swore at everyone, was nearly always drunk and had no regard for his work or friends. Harlow reported a marked change, stating that Gage displayed “little deference for his fellows” and would use “the grossest profanity”. Previously thought of a hardworking, trustworthy and model citizen, now Gage couldn’t even get his old job back. Harlow remarks:

“His contractors, who regarded him as the most efficient and capable foreman in their employ previous to his injury, considered the change in his mind so marked that they could not give him his place again.” Harlow

Instead, he took on a series of menial jobs, which was all he was able to do. Once the head of a group of men working on an important project, now Gage was lucky if he got stable or farm work.

Towards the end of his life, Phineas Gage went to live in San Francisco to be near his mother and sister. It was here, after suffering from a number of seizures that he passed away in 1860. Gage was just 36, but his accident has been the source of much research since his untimely death.

Why the injury to Phineas Gage’s brain is so important

“It’s one region [of the brain], it’s really obvious, and the changes in personality were stunning.”

Malcolm Macmillan is an honorary professor at the Melbourne School of Psychological Sciences. Author of An Odd Kind of Fame: Stories of Phineas Gage, he wrote:

“He was the first case where you could say fairly definitely that injury to the brain produced some kind of change in personality.”

What does the temporal lobe do?

With new technology, we are able to see the exact amount of damage the tamping iron caused Gage. It is also possible to map out which part of the brain was affected and how this relates to our personalities.

In fact, after the accident, scientists began to look more closely at how brain injuries were affecting a person’s character. Because of this research, we now know what function the temporal lobe plays.

The temporal lobe is responsible for processing information it receives from our eyes and ears. But it plays a major role in other functions. For example, long-term memory, behaviour and personality, interpreting images and sounds and processing language.

Damage to the right side of the temporal lobes can result in a reduced ability to recognise objects or faces. It can also affect our character, making us more aggressive, more talkative and less inhibited. It also results in a loss of musical ability. If the left-hand side is injured, people have trouble recalling words and images.

If it wasn’t for Phineas Gage and his tragic accident, we might still be using bumps on the skull to diagnose mental illnesses. In fact, researchers have used his accident time and time again to explore the workings of the brain.

Even celebrities have gained from Gage’s accident. US actor Gary Busey and comedian and actor Tracey Morgan both suffered traumatic brain injuries. Their personalities also changed afterwards. However, now, thanks to Gage, we have a much better understanding of why.